An event titled “Media, Women and Psychology: Gender and Media” was held in cooperation with Üsküdar University Social Sciences Institute and Üsküdar University Solution Focused Women's Problems Research and Application Center (ÜSÇÖZÜM). ÜSÇÖZÜM Director Assoc. Prof. Aylin Tutgun Ünal said: “Perception management is actively used in social media. If the person is not happy, that person tries to make up for it on social media. We cannot fix social media without fixing real life" in the event held under the moderatorship of Asst. Prof. Cem Tutar from Üsküdar University Faculty of Communication. 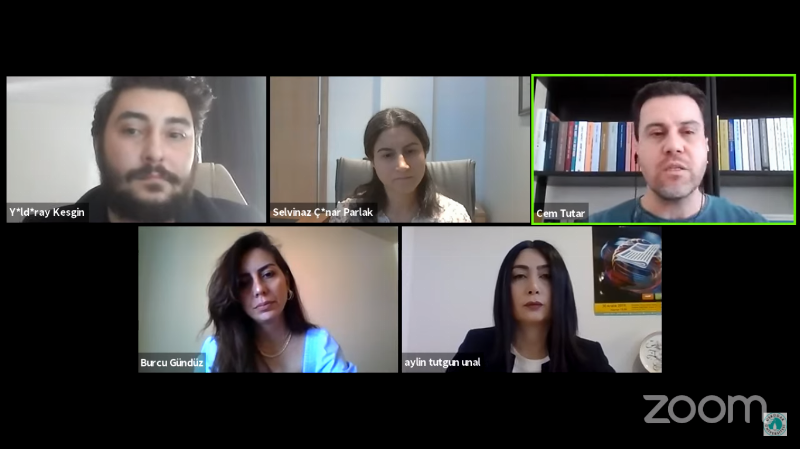 Specialist Social Worker Burcu Gündüz from Üsküdar Public Hospital, who is one of the speakers at the event said: "Gender; it refers to the categories of femininity and masculinity, the behaviors and attitudes and social roles that are assumed to be related to these categories and determined by the sociocultural structure. In this process called socialization, individuals constantly learn the expectations of the society from them from the moment they are born until their death and try to realize this. These expectations may vary from society to society, culture to culture. People who are born as a girl or a boy, face expectation defined as specific to men and women during this socialization process. In general, these expectations point to a dimension related to social structures and relationships beyond biological characteristics originating from gender. For example, women are mostly docile, delicate, emotional or passive while men are expected to be strong, rebellious, rational and active in a patriarchal society based on male domination. In other words, it includes personality traits and behaviors that are culturally appropriate for women and men in society, and these often turn into stereotypical judgments by the society, such as 'Man does not cry' or ‘Woman makes homes'. Everything that is used socially, physically or psychologically about women and femininity in society is used for insult or humiliation. It is defined through men with good, beautiful, strong features who honor or support. For example, 'man of his word' or 'like a man'. The identity formation and subjectivity of women who cannot find their place in language are negatively affected. Social language sees only men as human beings. Even in the news, violence against women is called love murder and the situation is made romantic. It is emphasized that morality is only the duty of women.”.

Mentioning the necessary factors for ensuring gender equality, political influence and solutions related to media connections (discursive, affirmative action, positive discrimination strategies, social media activism), Asst. Prof. Yıldıray Kesgin from Üsküdar University, Department of New Media and Journalism said: “According to press ethics, the visual selection of the victim and the murderer should only be used in murders against women if there is a need for a photograph. As if to protect the perpetrator, there should not be a mosaic picture of the perpetrator instead of the victim. Moreover, the details on the way the victim was killed should not be given. Details that would be an encouraging model should not be given. In addition, there must be news that will protect the victim's personal rights. Otherwise, the victim is given a second victimization with the language of the news.”.

Talking about the differences between men and women in the use of social media, ÜSÇÖZÜM Director Assoc. Prof. Aylin Tutgun Ünal said: “Gender is also reflected in social media. First of all, women need to end their efforts to create competition between their genders and reconcile with their gender for women to gain power. Mobbing, which is widespread in business life and social life, should not be performed. It is seen that women's search for emotional support on social media and men's efforts to dominate are also reflected in the conflict score on social media. Digital games are attributed to men, and the fact that men play digital games at a high rate proves this. When you dig deeper, there is also the fact that men play games with the instinct of winning, achieving, that is, by showcasing power, rather than making the most out of their free time. On social media, there is a situation as if women should always be beautiful, thin and good-looking. In short, perception management is actively used on social media. If the person is not happy, they try to make up for it on social media. We cannot fix social media without fixing real life.".

Clinical Psychologist Selvinaz Çınar Parlak stated that the last stage of basic construction with society is the adolescence process and added: “A person's perception of individual identity begins to form from childhood. How they position themselves, how they perceive themselves, their basic beliefs about themselves. Women or men are born with similar basic emotional needs; however, what kind of a woman or a man they will become depends on the environmental factors they are exposed to. As a social being, people teach one how to exist in this social system. The first place where a person is exposed to this is the family. Therefore, the child internalizes it, just as the parents have a perception of identity. In fact, there was a patriarchal structure for centuries because physical strength was very important in hunter-gatherer society. The man had to collect the food and take care of the offspring and the woman. The man had to be strong and protect the woman. The woman had to stay at home and take care of her baby. However, the need for men's physical strength decreased with the change in social structures and culture. The woman's only responsibility was to stay at home and take care of her baby. Especially in the last 50 years, the basic needs of women and men, society and life have changed with the transformation of capitalism and the economy. Change will inevitably continue as needs change. It is often a lack of basic trust that makes women feel worthless. Therefore, if we can make the child feel unconditional acceptance in our cartoons, children will quickly adapt to the changing social systems in women's roles at home, at school, at home, since they basically exist independently of gender. They will adapt quickly to value judgments and norms when they grow up, and position themselves in a position to feel valued. It will not accept some cultural bullying, violence and worthlessness.”