The Speaker of the Grand National Assembly of Turkey Mr. Binali Yıldırım received an Honorary Doctorate Degree from Üsküdar University 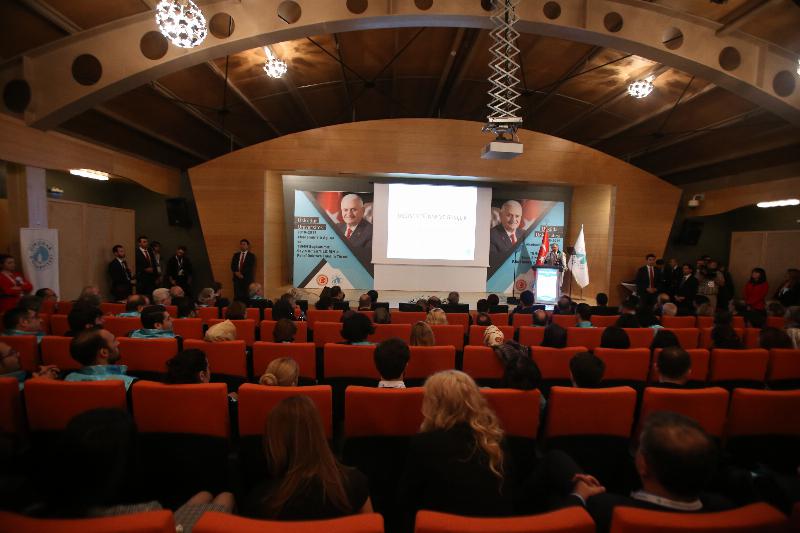 The Speaker of the Grand National Assembly of Turkey Mr. Binali Yıldırım pointed out that the people and institutions are motivated to make reference to the areas they have identified and continued “Üsküdar University is eager to apply a multi-disciplinary approach in diagnosis to treatment within this context to also be performed in neurology, psychiatry, psychology.” 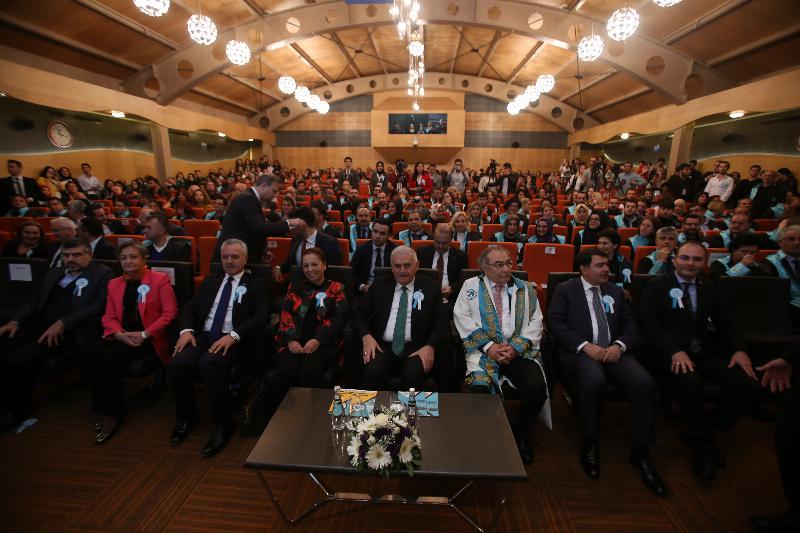 Prof. Tarhan: “We chose neuroscience as our R&D focus”

Üsküdar University President Prof. Nevzat Tarhan delivered the opening speech of the ceremony. Prof. Tarhan gave the first lecture on “Changing World and Youth”. During his speech, Prof. Tarhan stated in University’s 7th Academic Year Opening that Üsküdar University has 14 thousand graduates, 5 faculties, 1 vocational school of health sciences and institutes and currently has around 19 thousand students. Prof. Tarhan shared that they are trying to do their best as a foundation University and pointed out that the universities have 4 important functions. He continued, “We want to provide a profession, inform society, make R&D and ensure that information is transformed into products. We give importance to these four principles altogether. We, as a University, chose neuroscience as our R&D focus.”

The neuroscience of intention is being researched

Prof. Tarhan, who stated that the neurobiology of intention in the world is currently being researched, continued his speech as “The decision-making area of man is also the region of intentions. Whatever you intend to do is what your brain imagines as well. For example, when you think of eating, that part of the brain works as if you are eating. It is a known fact that the intended behaviour is the main behaviour in people's behaviour. This has led us to Positive Psychology and the neurobiology of morals. The brain's mirror neurons work when the person intends. Therefore, an intended behaviour is now a scientific category. This is not only an area of interest for teachers of literature and philologists, but also for the psychology branch. Harvard University currently provides Positive Psychology classes. Prof. Tarhan emphasized that Üsküdar University has made the Positive Psychology class mandatory since 2012. Prof. Tarhan continued his speech “We teach humanitarian values in this class. Positive psychology theory is as if taken from the Mawlana. It is systematized and transformed into a methodology as the scientific reasons are explained but unfortunately, they did not give a reference to Mawlana. This is our shortcoming.” 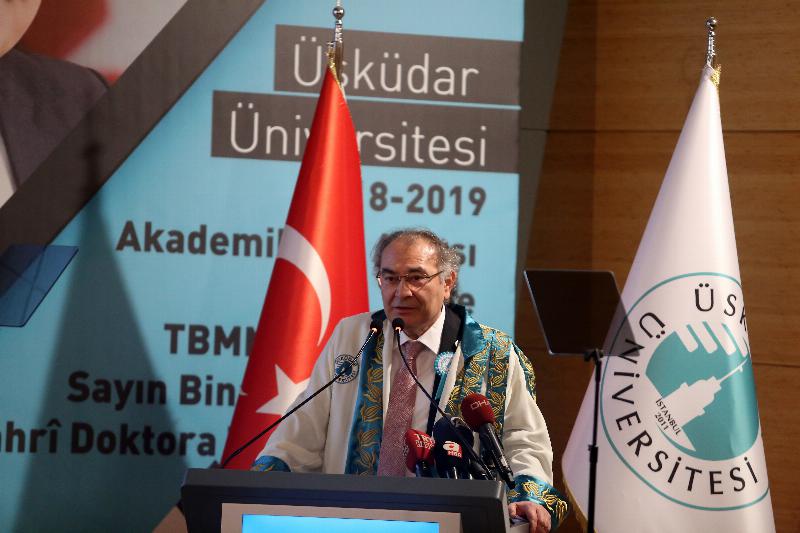 Giving up on critical thinking has stopped the progression of thought

Prof. Nevzat Tarhan addressed the reasons why the Ottoman Empire missed the industrial revolution and said “theology, mathematics, astronomy, and philosophy classes were removed from the madrasas in the 18th century. Ibn Sina, Ibn Rush, Farabi who was considered the second Aristotle, were removed from the syllabus. While Europe initiated the thought school in the Middle Ages, a protective approach was maintained in the madrasas as the thought-based approach was eliminated in the education system. This has stopped the improvement of thought.”

Critical thinking should be instructed

Prof. Tarhan addressed the importance of teaching critical thinking and continued, “It is crucial to provide religious education and positive sciences together. This is to ensure the advancement of thought. It is vital in this aspect to generate a generation that is capable to criticize and query.”

Prof. Tarhan said that the issue of artificial intelligence is a significant topic that is spoken around the world, and now there is a civilization crisis in both the West and the East. There is an evolving youth out there. Value-based education is important. It is also important to be able to teach charity, forgiveness, being a good person. This is how we can win over the new generation youth.”

We should respond to the youth’s psychological needs

Prof. Nevzat Tarhan expressed that there are 3 fragile points of today’s youth and continued, “The younger generation has a high expectation of justice. They hate the peremptory approach and have high expectations of freedom. If we do not respond to these expectations and psychological needs of the youth, it will be very difficult to communicate with them. Sultan Abdülhamid was a very good leader and sovereign. He did a great deal of work until a strong military structure was formed, but in doing so, he played into the other’s hands. A dialogue was not made between the youth. Therefore, the youth he trained, turned against him. For this reason, we need to be able to re-establish an emotional connection with youth. 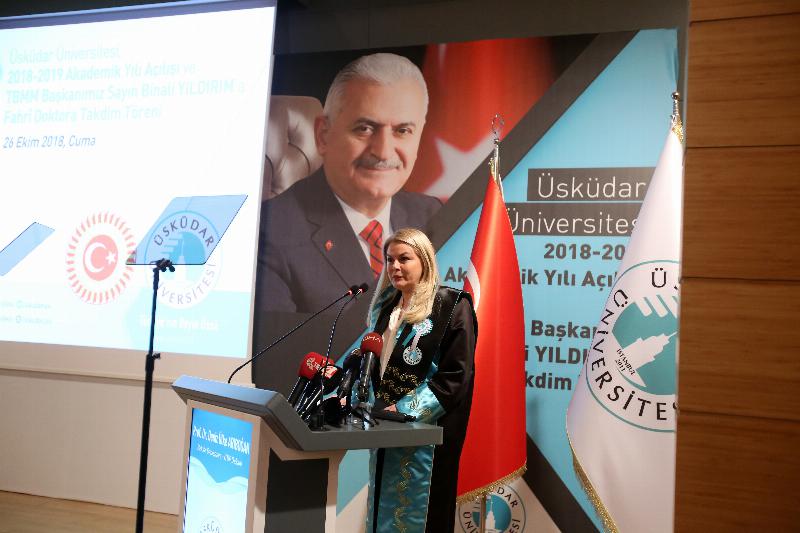 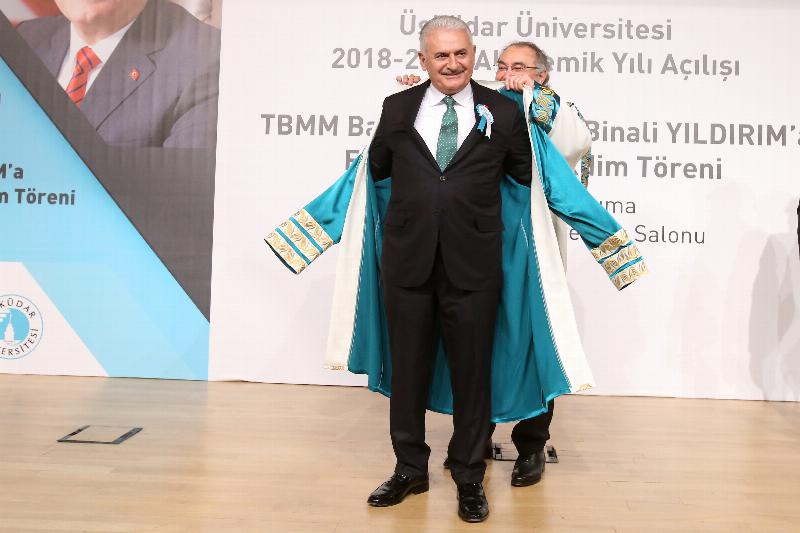 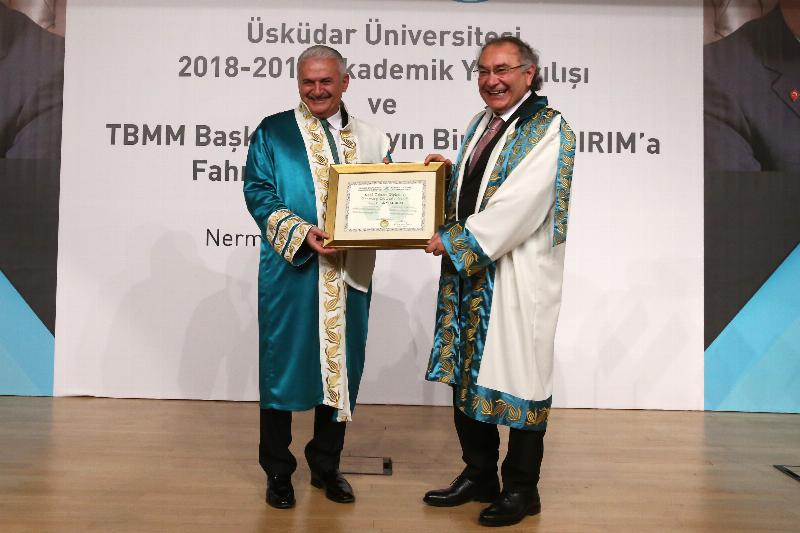 Mr. Binali Yıldırım: “These young people are becoming a hope for our future”

Mr. Binali Yıldırım stated that there have been more than 19 thousand graduates at Üsküdar University with 4 faculties, 5 institutes and 1 vocational school and which has the roots back to 1999, the founding of NP Group. Mr. Yıldırım said, “These young people are becoming a hope for our future due to the formation education they receive. Because Üsküdar University is a University that brings together good, beautiful and true social sciences with positive sciences seeking realities. Our friends have told me that Üsküdar University is Turkey's first behavioural and health thematic University.” 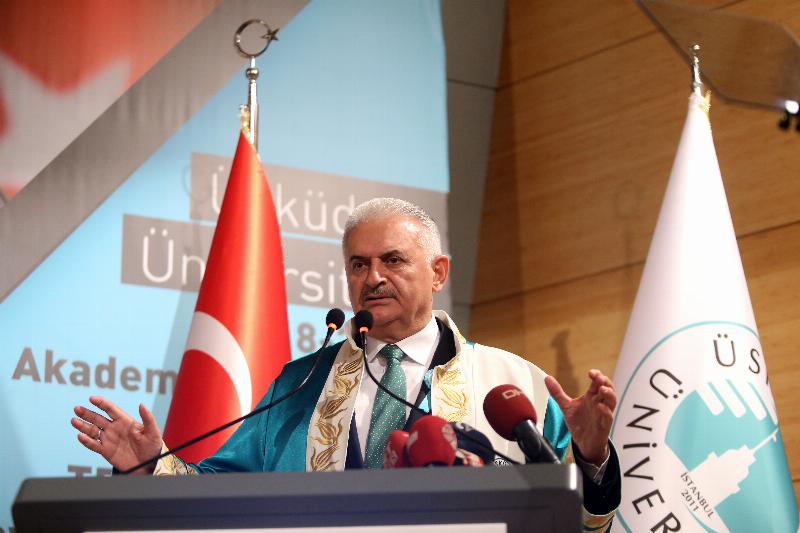 Mr. Yıldırım shared that it is not possible to be good at every field in the current age and he continued as, “I can do any kind of job” era is now history:

“People and institutions are now moving towards making reference to the areas they identify themselves with. Üsküdar University is eager to apply a multi-disciplinary approach in diagnosis to treatment within this context to also be performed in neurology, psychiatry, psychology. Therefore, I can also say that this is a University that has differs itself from other universities. It is a fact that it is trying to actualize the health sciences from the classical field to a computer-based education system. I can say that this qualification of the university addresses our young people who are interested in psychology and behavioural health sciences. The word university combines universe and city, which the gateway to reach universal from local. It is tried to reach a new synthesis with different beliefs, thoughts and interpretations by using the accumulation of humanity as a whole. At this point, it is very important not to be ideological and dogmatic. It is obvious that there is a need for universities in order to produce knowledge systematically, teach academic thought and obtain the power of analysis. We need universities in order to mature democracy through seeing differences as a richness and developing a culture of communication and consultation. In this sense, universities that produce knowledge and value in the fields such as health, engineering and social sciences contribute greatly to humanity.” 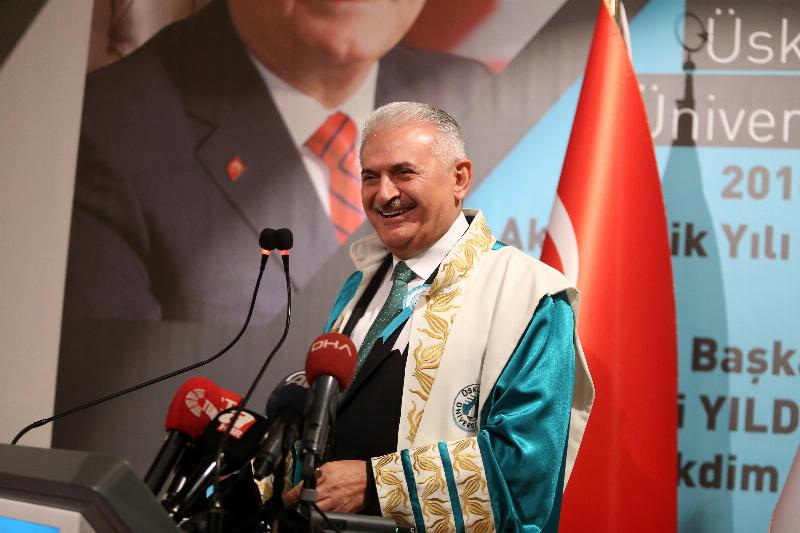 The Speaker of the Grand National Assembly Mr. Binali Yıldırım said “I have seen and witnessed today that Üsküdar University, which expresses its principles as open to criticism, libertarian, pluralist and participant, offers you tremendous opportunities. I would like to thank once again everyone who has contributed starting with Prof. Nevzat Tarhan who put forward the idea of a university.”


He appreciated the social responsibility projects

Mr. Yıldırım also stated that he learned that Üsküdar University is not only engaged in academic education but also social responsibility projects. He said, “I appreciate the fact that you are extending your hand to our young children who need to be sheltered with the help of civil society organizations such as Hold My Hand, Happy Family Happy Life Organizations. This is the way to integrate with society and move from theory to practice. I also congratulate you on being actively involved in solving social problems.”

These are your golden years, make the best of it

Mr. Yıldırım advised, “Dear youngsters, without a doubt, you are our security and power in regards to protect Turkey's future and look to the future with hope. You absolutely need to learn a language while at the university. Learn to write, speak and every aspect of a language. These are your golden years. If you do not learn a language at these years, it becomes harder afterwards. When I was 45 years old. I left my family with children back home and went abroad for two years to learn a language. I also did a master’s degree. This is what we need. Whatever your occupation may be, you have to learn a language to open up to the rest of the world and know what is happening globally. Learn at least one language, whichever that will be.” 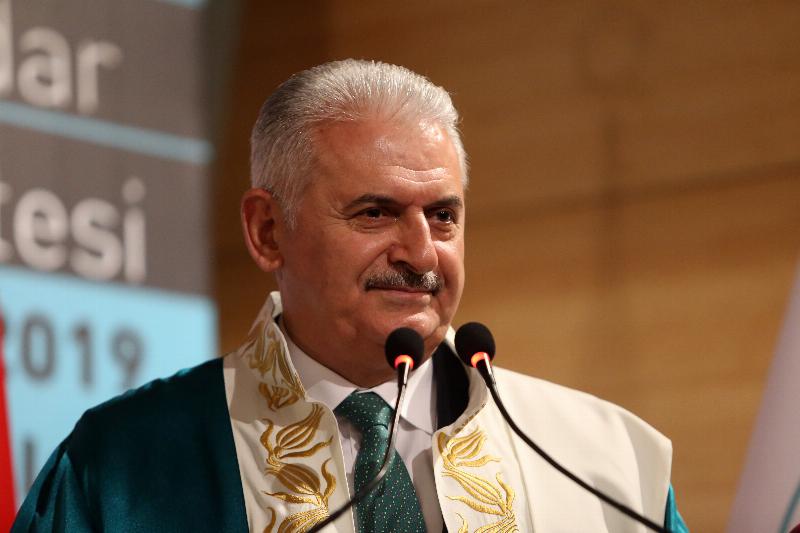 Mr. Yıldırım, the Speaker of the Grand National Assembly said that there is no age limit in learning and continued as, “As soon as you give up on learning, you start to age. It does not matter if you are 60 years old or 20 years old, learning keeps people young. Therefore, we will read and learn more. Learning smooths ruffled feathers of people. It completely eliminates the combative identity. Learning brings everything to the point in which mutual understanding is accomplished. 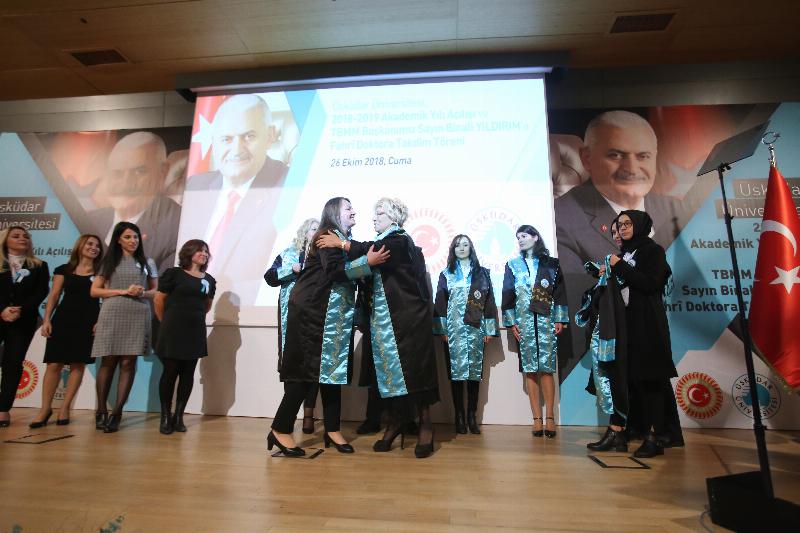 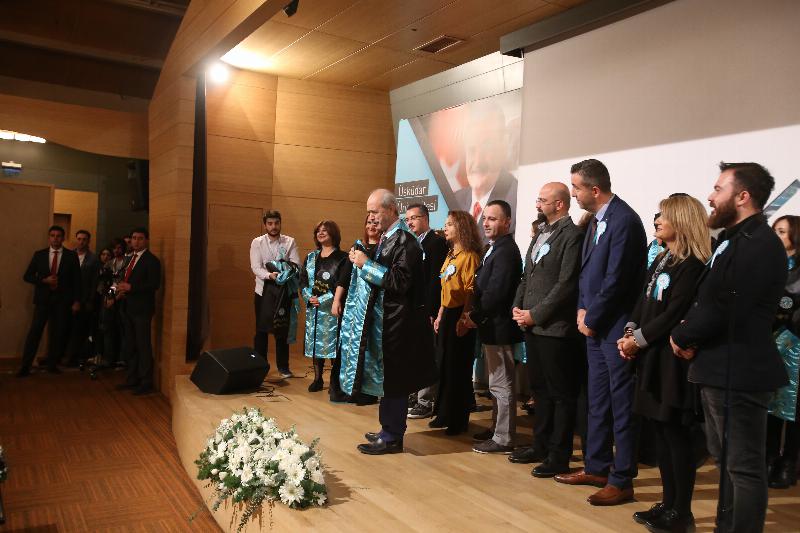 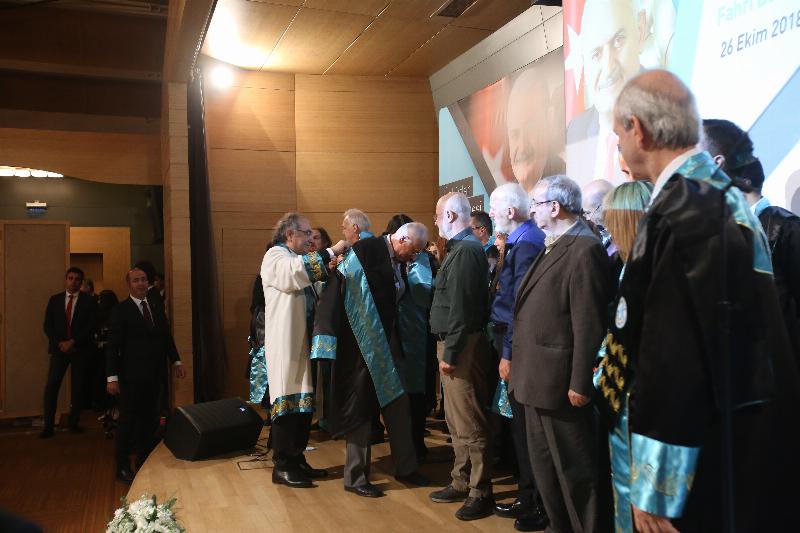 The ceremony was live streamed from ÜU TV and a family photo was taken at the end of the event. 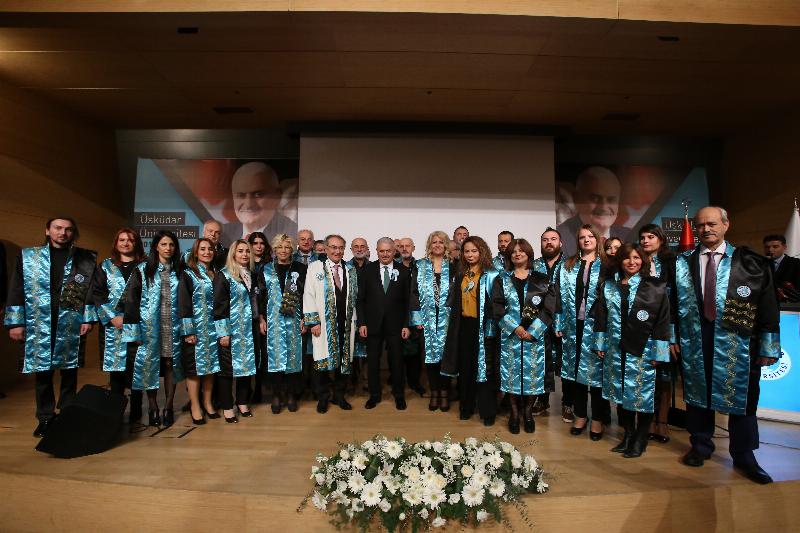 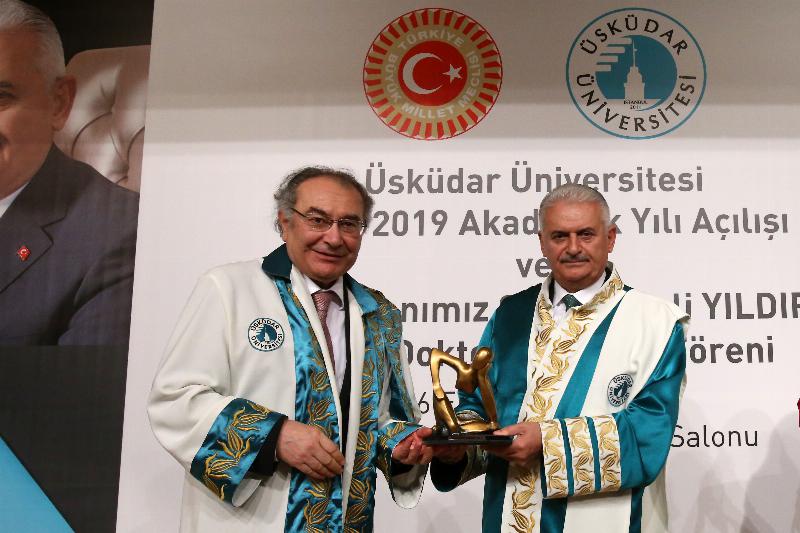 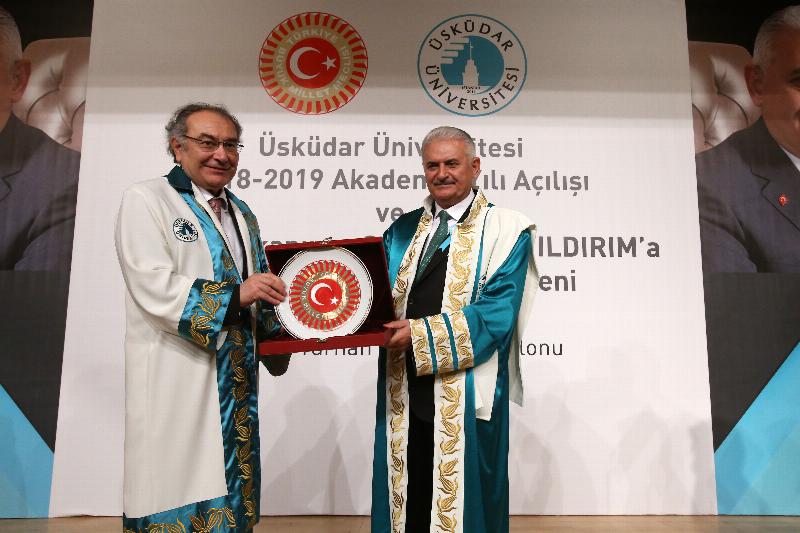 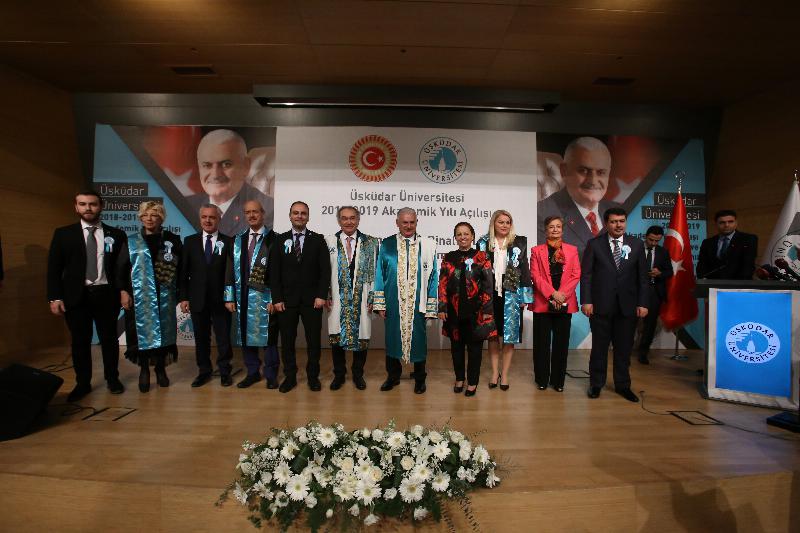 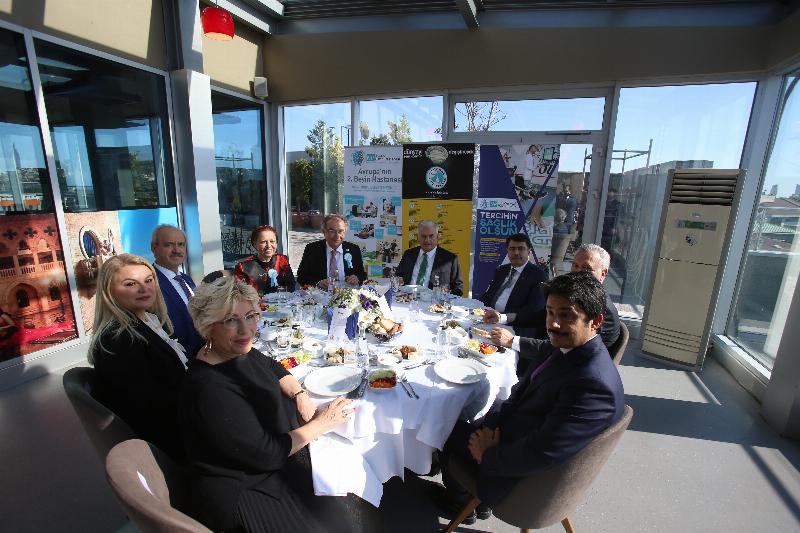 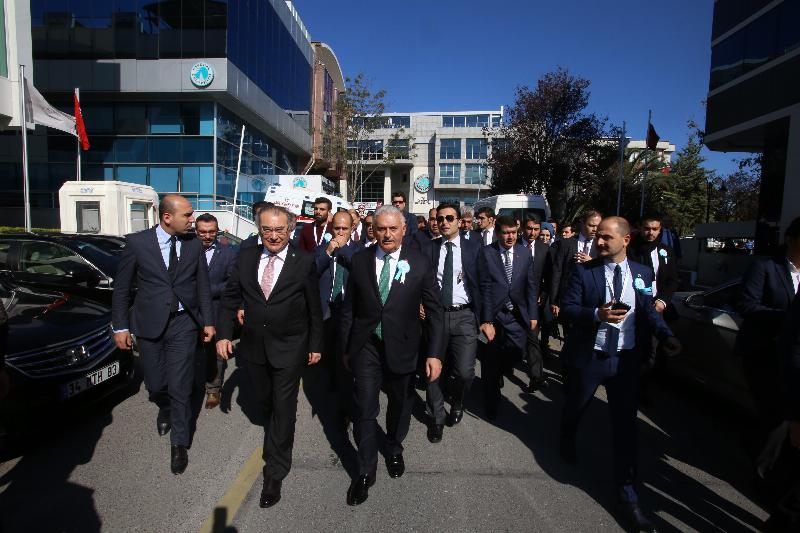