President of Üsküdar University, Psychiatrist Prof. Nevzat Tarhan participated in “Technology, Ethics and Religion” Workshop held online by Mardin Artuklu University, Faculty of Islamic Sciences with national and international participation. Tarhan made striking remarks on titles “Is Universe Simulation?” and “Are We in the Age of Post-Truth?  Mentioning there is a basic process system special to humans within the mind, Tarhan said: “According to this, there is a universal database in the world. What is the universal data? It connects to a database called Big Data. The world heads towards to a digital dictatorship.  The fact that the world has a universal database in this case is a a reality that science of quantum discovered.  In this case, there is no such thing as matter. Matter is not a reason but a result. We have seen that.”. 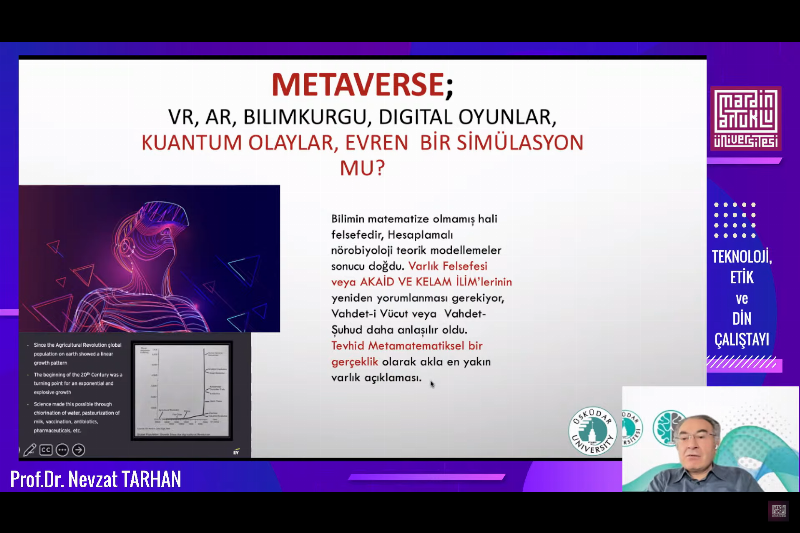 President of Üsküdar University, Psychiatrist Prof. Nevzat Tarhan mentioned quantum when the question of ‘Is universe simulation?’. Tarhan said: “Metaverse created a simulation. Now, people can trade, purchase and sell products and it move towards to a direction that they can spend their entire day there in the simulation.  This is the version of not being mathematicised. What we call version of science that is not mathematicised is philosophy. For example, it was born as a result of neurobiological basis, that is, theoretical modellings.  Ontology or doctrines and kalam science (science of discourse) must be re-interpreted.  According to this information, vahdet-i vucud (unity of existence) or vahdet-i şuhud (unity of the apparent) become more understandable. Tevhit (monotheism) is the most reasonable as a mathematical reality.  Tevhit could be a description of a god that has the quality of monotheism and create this universe mathematically. This occurs. There is a need for god for this because people have a need to believe in beyond the death and a higher power. Tevhit is the best and most reasonable mathematically.”. 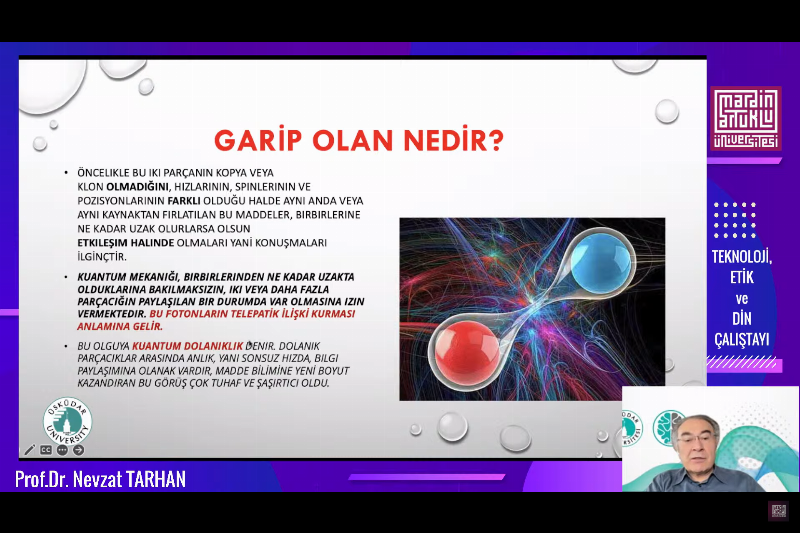 “Now, we are at the limit of physics” 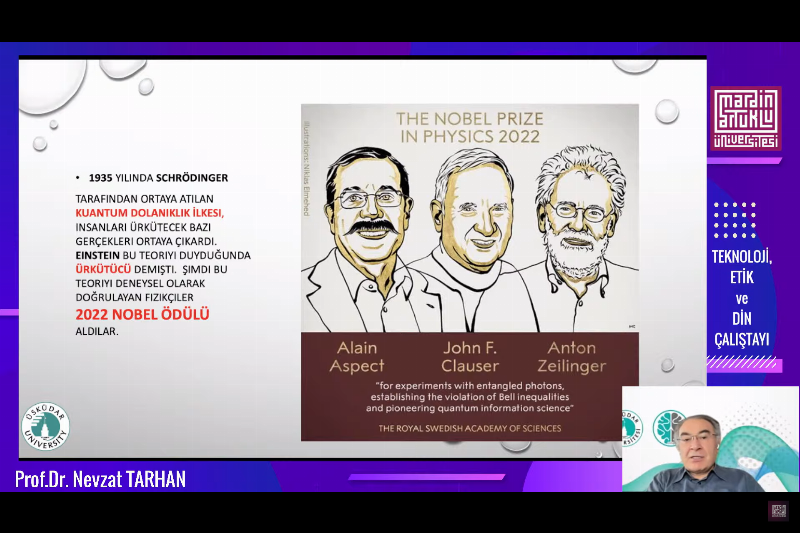 “No information is lost in the universe”

Mentioning that proton telepathy is approved as a proof that it exceeded the speed of light, Tarhan said the time is proceed backwards and no information is lost in the universe. Tarhan said: “Quantum mechanics shares two or more particles regardless of how far they are and it allows to exist in one situation. This means protons telepathically communicates. Proton telepathy is in the literature now.  That is, two protons which are million light year far from each other can communication with each other regardless of time and place. This is called quantum entanglement. Proton telepathy enables instant endless information and share between each other. This perspective is quite strange and interesting that brings a new dimension in matter and science.  The proof of quantum entanglements will bring new areas such as quantum computer encryption and communication networks.  Proton telepathy is approved as a proof for exceeding the speed of light.  It has been understood that no information is lost in the universe where time proceeds in backwards. In fact, the time proceeds backwards. No information is lost in the universe. Our speech right now stays in a universal flow and we live in different energy band. When we die in the energy band we exist, we will move on to a different energy band.  All thing we knew will be on that energy band.”.

“Everything is connected with the aforetime”

Tarhan underlined that the death is actually transition from one life from to another life form and said: “Humans now came from another life form, from a spiritual life form. Here, they entered to a material life form and after that, they will transmit to another life form with the accumulation they obtained here.  This shows that matter is not eternal but there a divine design and a database is eternal.  This data base is mentioned as “Levh-i Mahfuz” in Qur’an. The information in the presence of Allah is Levh-i Mahfuz. Time proceeds backwards. Now here, matter and object always exist as entangled way. For example, protons launched at the same time is always in communication with each other. Some of them might be seen as not that important details, however, it has supported the perspectives that say that everything existing before is in the interaction with each other. That is, the aforetime studies the truth of non-alignment. In the aforetime, everything is connected, aligned with each other. We now understand better that an apple in Japan works with the same principle with an apple here. When a brain is exposed to a stimulator, seemingly neurons are triggered randomly. When this triggering continues to accelerate to the hyperactivity of its triggering frequency recorded, it decreases to the speed of triggering of post-hyper net. During this, chemical weapons, synaptic communication that is neuro transmitters transform into chemicals and then electrical flow is created. This produces our behavior.”.

“No living beings cannot produce an abstract concept except humans”

Making remarks on physical brain and mind, Prof. Nevzat Tarhan said: “if we ask the question of mind more specifically as what the relation between physical brain and mind is, it is an ontological question on the nature of the mind. Secondly, it tries to understand how knowledge and information of the cause and effect relation between brain consisting of two things and mind, soul, transmits to each other. This is a question of epistemology. DNA sequences is only with DNA; however, these DNAs works as computer at the same time. There a chemical letter in the brain like 1-0, 1-0, works like 4-0, 4-0. Here, right brain is moral lobe and left brain is reasoning, analysis, speaking and estimation. Right brain is emotions, intuitions, excitement, creative, discovering, problem solving and understanding.  Right brain works also conceptually, left brain works mora rationally.”.

Prof. Nevzat Tarhan pointed out that there is first abstract information and tangible information comes later. Tarhan said: “According to philosophy of mind, humans are bigger and more than their brain and body. That is, a human is bigger than body and brain. Here, what was Descartes’s fallacy? What was Descartes saying? ‘I think; therefore, I exist.’ He indexed it on only mind and he brought a philosophy refusing other things except mind. Quantum mechanism actually showed this difference, however, it showed that the mind was not explained. In fact, our minds, consciousness that has an equivalence of matter, works as a quantum receiver resonating in the quantum field.  What is the creator of this system, operating, information, external power, external mind? And, who is this? Since this is a design, there must be a designer. It is not possible that this exists due to coincidental existence, and materialist perspective used to tell that our mind and brain activities were the same thing. Now, this idea was disproved. Materialist position of the mind is a classical view and it considers it as mind is something continues beyond the mind brain activity. This perspective was a former perspective in our field, psychiatry. That is, it is a materialist philosophical-reductive perspective. In other words, mind and consciousness phenomena is a literally linear perspective with brain neurology.  The world view occurs materialistically in that way. In that way, there is first matter and later idea exists, however, there is first abstract information and then tangible information exists.”.