Approximately 100 students from 19 teams including researchers from foreign countries attended in the 3rd RaDiChal22 contest carried out under the leadership of Üsküdar University TRGENMER Coordinator Asst. Prof. Cihan Taştan. Türkiye Cancer Institute President Assoc. Prof. Burcu Yücel and Vice President of Üsküdar University Prof. Muhsin Konuk also participated in the program which TÜBİTAK President Prof. Hasan Mandal and President of Üsküdar University Prof. Nevzat Tarhan attended. Prof. Nevzat Tarhan called for an organization to be held and said “A contests must be held such as ‘Science’s Got Talent’ for the youth to create more scientific projects.” While Prof. Hasan Mandal invited RaDiChal to Technofest. 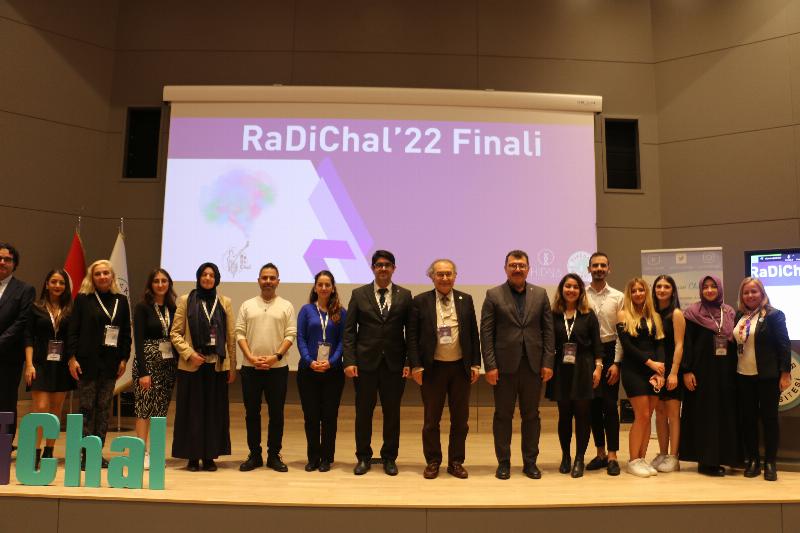 Students who carry outs studies that can be a treatment solution to rare disease based on genetics, have gathered together in the RaDiChal22 contents.

RaDiChal (Rare Disease Challenge) contest is established by undergraduate students under the leadership of Üsküdar University TRGENMER and RaDiChal Coordinator Asst. Prof. Cihan Taştan and this year, 19 teams consisting of 95 students participated in the contests including semi-final and final stages.  This year’s goal of the RaDiChal beginning in 2020 is determined as Williams syndrome (WS), LGMD (Limb-girdle muscular dystrophy) and MS (Multiple Sclerosis) which are among the often-seen rare diseases.  The projects developed to find solution for these diseases showed great effort to compete in the final.  When the evaluation process is completed for the projects which deemed worthy for the final, will be supported and rewarded to be actualized. 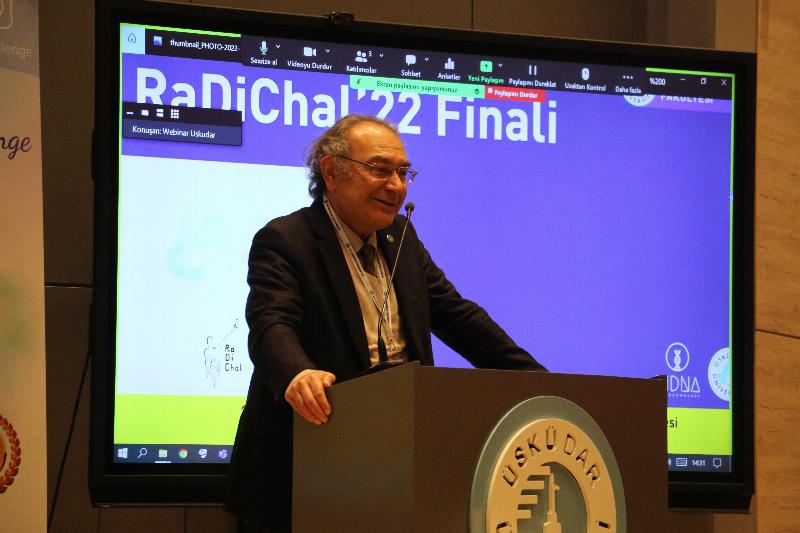 Prof: Nevzat Tarhan: “We should provide the necessary motivation towards science for the youth.”

Prof. Nevzat Tarhan stated that they launched a ‘Science and Ideas Festival” towards high school students in Türkiye for the first time in 2013 and continued:

“We searched if there is a similar contest around the world in that time. There was no such content organized by a university in Türkiye. However, around the world, there was a similar contest which was organized by a university in Oklahoma. There were tomato festival and cherry festivals however, there was no festival for science when you searched. It is only possible for humans to learn only if it is realized in an entertaining and disciplined environment according to neuroscience.  We, then, began that to provide this. ‘Science and Ideas Festival’ still continues. High school students prepare serious projects. When we see their excitement and gleam in their eyes, we thought an ideal must be provided to them. To provide motivation towards science for the youth, we started the festival with supports by İstanbul Provincial Directorate of National Education and with our idea to help the youth to produce mid-long-term projects by saving them current events’ effects.” 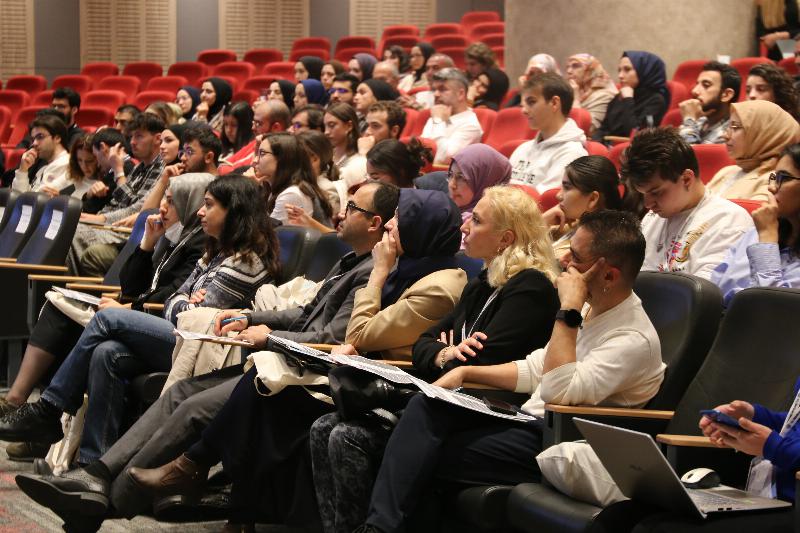 Prof. Nevzat Tarhan: “If we do not attach importance to R&D, we will be object of the science.”

Stating that “Science can be only science if it is done with love, motivation and enthusiasm” Prof. Nevzat Tarhan said that “A scientist must see a laboratory like a garden of heaven.  They will not understand how time passes when they are in the laboratory. Actually, the project idea of Technofest belongs to us. TÜBİTAK also should spare their budget more than the festival. When I researched the success of Amazon, I realized that the importance they gave to R&D. If we do not attach importance to R&D, we will be object of the science. If we want to the subject of the science, we must prioritize R&D.”.

Prof. Nevzat Tarhan: “A Science’s Got Talent must be organized.”

Indicating that similar projects done in Science and Ideas Festival are also carried out in RaDiChal Prof. Nevzat Tarhan said “If we can support the studies done, excellent results can be emerged. Talent management is very important in science.  RaDiChal coordinator Asst. Prof. Cihan Taştan works harmoniously with the youth. One of the most important aspects in managements is knowing well to discover a talent and to manage it. I wish it would be possible to develop this more by turning it into a bigger organization like ‘Science’s Got Talent’.  Talented young people can be gathered together among universities. A support can be provided by TÜBİTAK regarding this. We can raise the future’s Nobel candidates. We must create a climate of possibility to spread the love for science among young people. Well, scientific substantiality is requited today to prove the factuality of information.”. 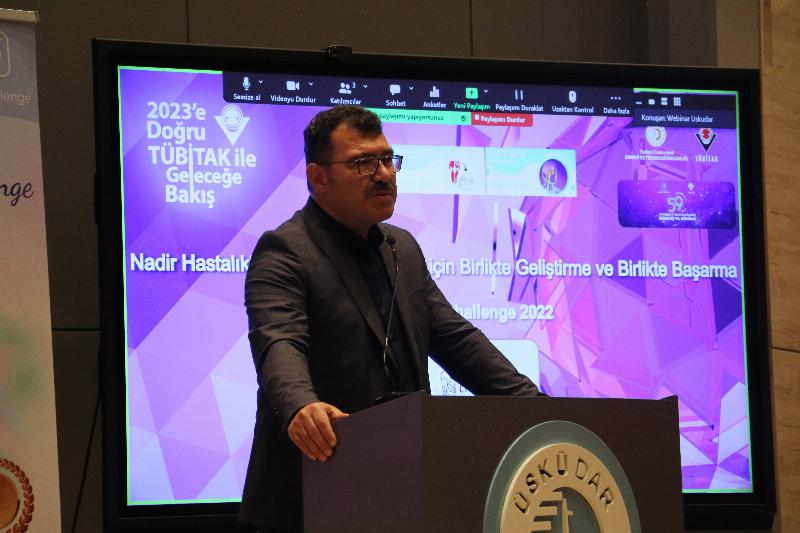 Stating that Technofest reached 5 thousand visitors when it started in 2018 TÜBİTAK President Prof. Hasan Mandal said “It became it biggest technology festival of the world in 2019 and 1 million 721 people participated. In 2022, our 600 students participated as contesters. This shows that Türkiye has an amazing potential regarding our youth. Our 600 students say ‘I am candidate for solving today’s and future’s problems by using science and technology as a tool.’. Technofest means our future. That’s why, we thank to Prof. Nevzat Tarhan as he refers this the most.”.

Prof. Hasan Mandal: “We invite the RaDiChal to the Teknofest.”

Emphasizing that the increase in the ratio is towards young people Prof. Hasan Mandal said “I would like to express the amount we budgeted. It is only 1% of our budget.  Unfortunately, it is a low percent. This is not only a scientist support program, it is a contribution we provide within a science community. Of course, we organize 15 contents that various institutions attend within the scope of Technofest. There is also ‘Biotechnology Innovation Contest’ held by our professor Cihan but there are also many other contests within this scope. If it is demanded, we would like to have RaDiChal within Technofest and we would have pleasure to organize the 4th ‘Biotechnology Innovation Contest’.  We can manage the budget for it easily, as well.”. 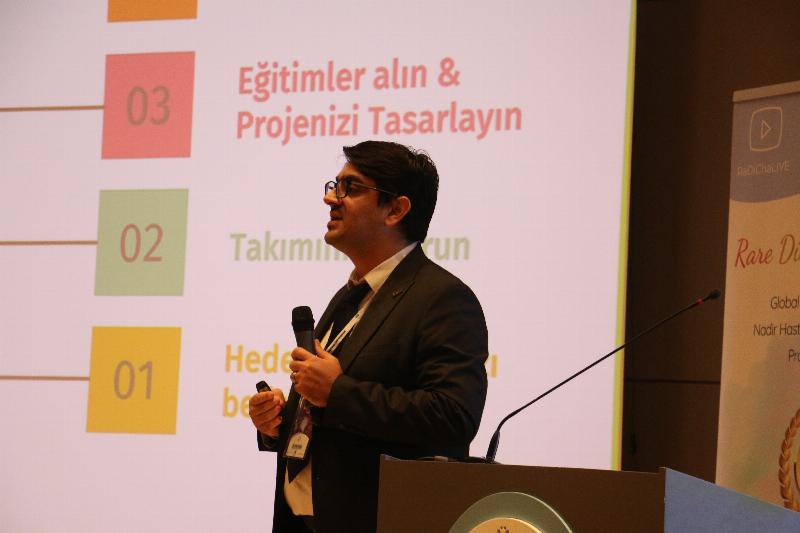 Üsküdar University TRGENMER Coordinator Asst. Prof. Cihan Taştan expressed that they named the contest as RaDiChal emphasizing they work on very rare diseases and he said:

“It was very important that our students of undergraduate, postgraduate and doctorate programs concern the rare diseases which very few people work on, and it was also important that they organize social awareness events on social media or within society while working in the laboratory. We call rare diseases if the disease is seen in 1 person every 2 thousand people. We encourage our students to create projects regarding treatment by choosing 2 different rare diseases within the scope of RaDiChal since 2020. 89 university teams consisting 400 students from 6 countries have attended the contest until now.  This year, we chose Williams syndrome (WS), LGMD (Limb-girdle muscular dystrophy) and MS (Multiple Sclerosis) among rare diseases. 10 teams are in the final among 19 teams. When the evaluation process is completed, winners will be announced and their projects will be supported and rewarded.”.