Uskudar University researchers explained their work at the G20-N20 Conference

The 8th of the G20 - Neuroscience20 (BRAIN - SPINE - MENTAL HEALTH) conference was held by the Association of the Brain Mapping and Treatment (Society for Brain Mapping and Therapeutics - SBMT) established in 2013 in which distinguished researchers of the field of neuroscience mainly from the US are participating. Researchers from Uskudar University and NPISTANBUL Brain Hospital from Turkey attended the conference also under the leadership of Prof. Dr. Nevzat Tarhan. Researchers from 15 countries were particularly interested in the session, where Uskudar University, which hosted the 2nd G20 summit in 2015, shared its work in the field of neuroscience. 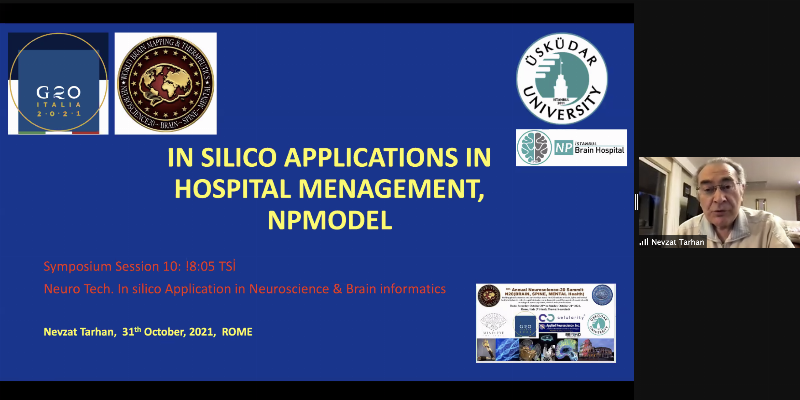 The G20 Leaders' Summit, which brings the leaders of the world's 20 largest economies and representatives of international organizations together, has begun in Rome, the capital, hosted by Italy.

In this context, the 8th G20 - Neuroscience20 (BRAIN- SPINE) MENTAL HEALTH conference organized by the Society for Brain Mapping and Therapeutics (SBMT) was held.

Prof. Dr. Nevzat Tarhan, who was elected president of the Brain Initiative (MeBrain+ Initiative) covering the Middle East and the Balkans neighborhood countries by the Society for Brain Mapping and Therapeutics (SBMT), made a presentation within the scope of neurotechnologies, the new focus of brain research. In the session titled "NeuroTech - In silico applications in Neuroscience & Brain Informatics", Tarhan noted the importance of biomarkers in psychiatric diseases and discussed classic biomarkers and the next generation of artificial intelligence-powered biomarkers.

Tarhan also gave comprehensive information to the participants about the "Artificial Intelligence and image processing based hospital information management system" for which patents were applied for NPIstanbul Brain Hospital.

Dr. Ihabb Elaff, a researcher at BrainAtica, a medical device design, and development company established within the university, informed SBMT participants about the tDCS device, its features, technical specifications, and superiority from the current tDCS devices, which were developed and CE certified.

Prof. Dr. Barış Metin discussed the biomarkers obtained from EEG signals and shared with the audience the importance of deep learning-based studies in the coming years, along with his studies on potential markers obtained by entropy and different entropy calculation methods, the results obtained, the shortcomings and strengths of machine learning-based feature extraction studies.

TMU Treatment in Men and Women

Assoc. Prof. Türker Tekin Ergüzel shared the remarkable results of women's response to treatment in his study, which was conducted in collaboration with Stanford University and which they completed together with the International Consortium for Brain Research, "A deep learning approach to evaluating sex differences in antidepressant response to neuromodulation using EEG in major depressive disorder", comparing the rTMS treatment response of men and women.

Founding Rector of Uskudar University, Psychiatrist Prof. Dr. Nevzat Tarhan was awarded two years ago the Golden Axon Leadership Award given to Nobel Laureate Eric Kandel in 2018 by DBMT for his work inspiring researchers in this field and for his role in raising awareness about foundation and foundation mission through strategic programs, global collaborations, and partnerships in the field of brain research.