“The Psycho-Periodic Cube” is featured in international journal 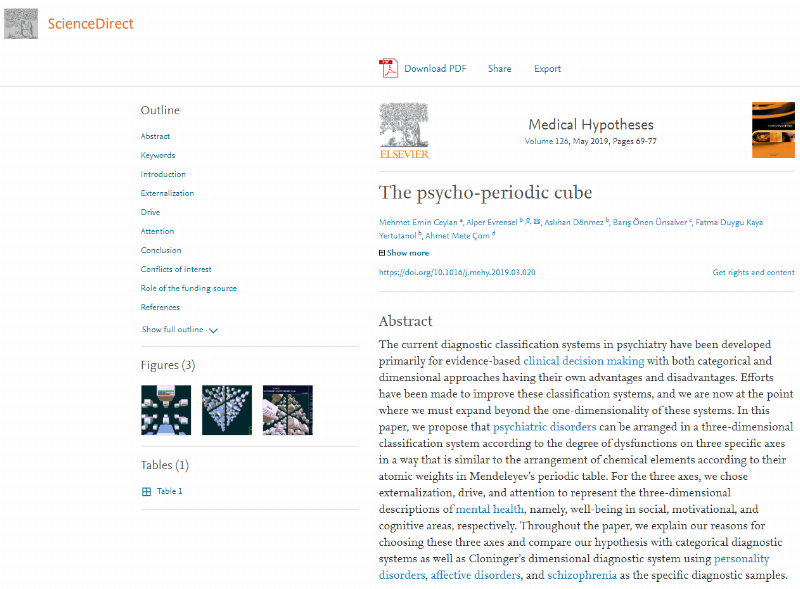 “The Psycho-Periodic Cube project”, which lasted for 5 years with the brainstorming, design, writing and publishing stages conducted by Üsküdar University, is featured in
Medical Hypotheses Journal. This new approach, which classifies psychiatric disorders by placing them on a periodic template in three independent axes, points out the location of undiagnosed disorders to future scientists.

Asst. Prof. Alper Evrensel said, “Classification systems have always been needed in all disciplines throughout the history of science. The typical example of this is the periodic table of Mendeleev.”
“In 1869, Russian chemist Dmitri Mendeleev discovered a way to classify the elements according to atomic numbers. In ‘the periodic table of atoms’ not only the elements that were known that day could not be determined, but also the locations of the elements to be discovered in the future were defined. The example of this is the fact that the element called Mendelevium, discovered in 1957 and named after the exploration of the periodic table, was placed in this table in the number 101.”

System used in the classification of psychiatric disorders: DSM

Asst. Prof. Alper Evrensel continued, “The current system used to classify psychiatric disorders is DSM. The main disadvantages of this system are to treat diseases as disjunctive phenomena and to determine the proximity or distance from the partnerships.”

“The character of the elements and their position on the periodic table should have characteristics that distinguish them between psychiatric disorders, similar to that determined by the atomic number. We as Üsküdar University Neuropsychophilosophy Study Group brainstormed on this topic. After about 300 hours of meetings, the axes of the “Psycho-periodic Cube” and design as well as the diseases were determined. We suggest that the psychopathology with this cube is due to different degrees of disruption / development in the three axes we define as exclusion, drive and attention.”

“Psycho-periodic Cube” separates itself from the other classification systems

“When we rate these axes from zero to five, a cube appears in the coordinates of 5x5x5, that is, the psychotropic cube accommodates 125 units in it. We have placed the existing definitions of psychiatric disorders in their positions within this cube and took into account their degrees in 3 axes. So we've made 30 positioning. In order to give an example of these positions; Schizophrenia has zero points on all three axes and is located at the zero point of the cube. In the opposite corner of the cube there is hyperthymia with five points in three axes. The most important characteristic of the psychotropic cube that distinguishes it from other classification systems is that they have empty positions that have not yet been placed with diseases. The cavities of the psychotropic cube, such as the placement of new elements discovered over time, will be able to locate and define psychiatric disorders in the future of the gaps in the periodic table of Mendeleev. In this respect, it also points out the future disorders that scientists will work on.”