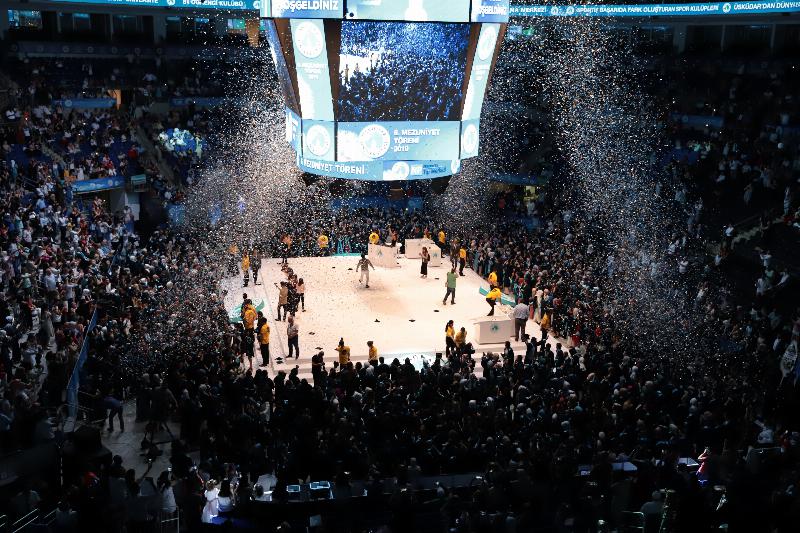 5,943 students who graduated from associate degree, undergraduate and graduate programs received their diplomas with a magnificent ceremony at the Graduation Ceremony of Üsküdar University's 2018-2019 Academic Year. Üsküdar University President Prof. Nevzat Tarhan, who advised young graduates, said that “We want our students to have dreams for the society and humanity in addition to being successful and happy individuals.” Graduates of Child Development pointed out the problem of “child brides” and Hasan Wasfi Salman Dader, who graduated from computer engineering, had emotional moments when he watched the video of his family and relatives at Gaza, who could not attend the ceremony.

5 thousand 943 students who graduated from Üsküdar University's associate degree, undergraduate and graduate programs, received their diplomas at the ceremony held at Ülker Sports and Event Hall in Ataşehir, Istanbul.

Üsküdar University President Prof. Nevzat Tarhan stated in his graduation speech that how proud they are that the first graduates were 230 students in 2014 and the number increased exponentially every year as this year it rose up to 5 thousand 943 students. 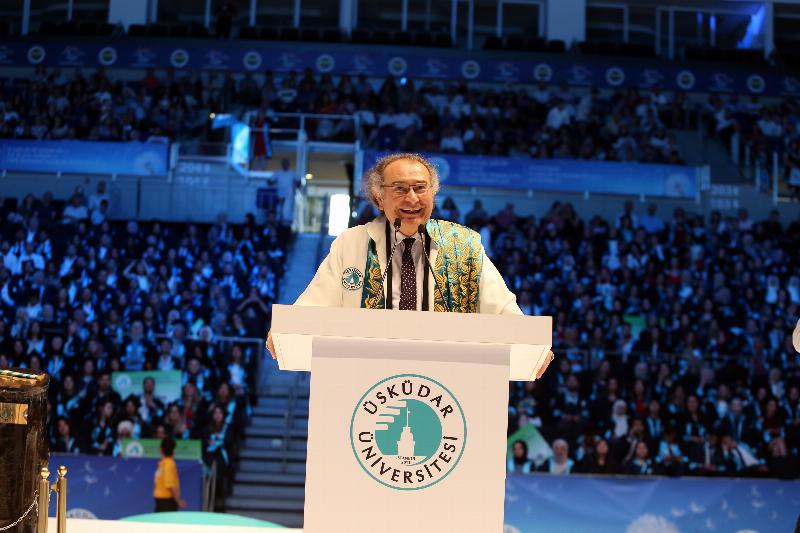 Prof. Nevzat Tarhan: “We are a student-focused university”

Prof. Tarhan stated that they work not only for students success but also for them to be good individuals and that they try to keep the quality high and to be a student oriented university. Prof. Tarhan continued as “We have a quality standard of being a student oriented university. We care about this because there is no efficient production where quality is not available. We aim to raise the quality bar even further as a university.”

Prof. Nevzat Tarhan: “You cannot change the world unless you change yourselves”

Prof. Nevzat Tarhan continued as, “You were a spark when you came to college, now you're a flame.” What does the flame do? It starts to illuminate and heat its surroundings, but it must burn itself before it does so. You cannot change the world unless you change yourselves. If you are going to do something, it is important that you win your first success, your victory against yourself. It is important that you begin to correct the world starting from yourself.” 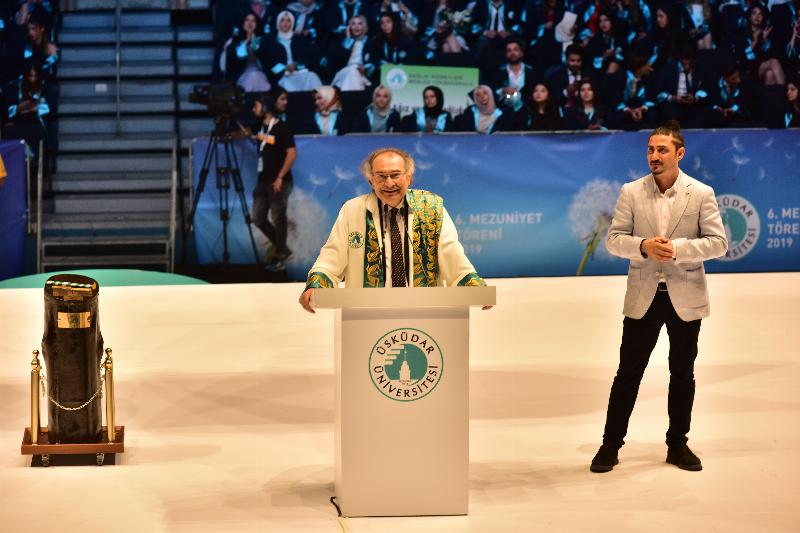 Prof. Nevzat Tarhan: “Solidarity is essential, the struggle is an exception.”

Prof. Tarhan said that “life is a struggle” motto is misunderstood. He continued, “There is competition in the sentence that ‘life is struggle’. However, cooperation is essential in life, struggle is an exception. Confidence is essential in human relations; doubt is an exception. Don't lose your relationship capital due to suspicion of insecurity.” Prof. Tarhan shared that unhappiness, loneliness and aimlessness are the main reasons of future anxiety.

Prof. Nevzat Tarhan said that the skills of the 21st century are innovation, entrepreneurship and most importantly, teamwork. He advised his students to have ego ideals, to plan for the future, to learn a foreign language, not to be addicted to technology, but to dominate technology. Prof. Tarhan remarked, “Having good intentions, being patriotic and religious does not protect the individual from mistakes. What protects people is accountability. You must not lose your sense of accountability.” Prof. Tarhan said, “In addition to being successful and happy individuals, we want our students to be individuals with dreams for the society they live in and for humanity.” 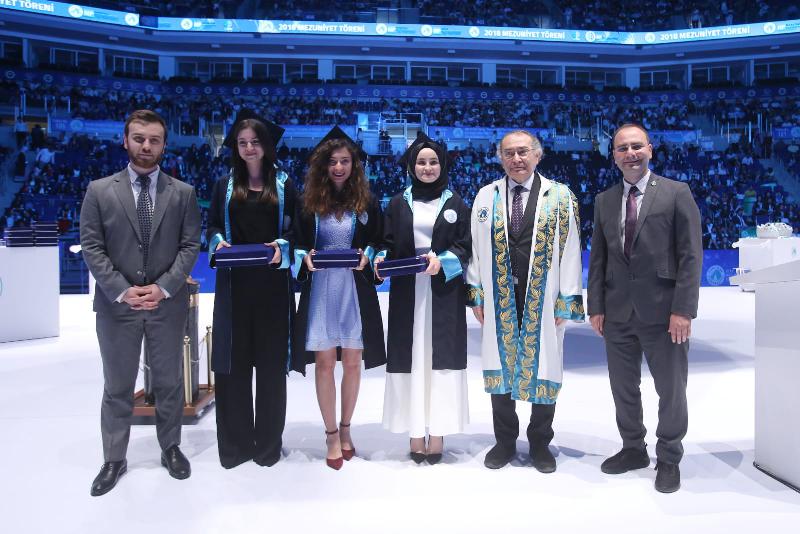 Awards were given to the highest ranking students

Sign language instructor Ahmet Kerem Erkan also accompanied Prof. Nevzat Tarhan as he translated Tarhan’s speech to sign language. The awards were presented to the top three students. Firomsa David Osman, the International Student Representative and Tayfun Gözler, the President of the Alumni Association, each gave a speech at the ceremony. Üsküdar University President Prof. Nevzat Tarhan, Üsküdar University Chairman of the Board of Trustees Furkan Tarhan and İDER Foundation Member of the Board of Trustees Fırat Tarhan gave diplomas to the highest ranking graduates. Vice Presidents, Deans of the Faculties, Director of Vocational School and other academic staff presented diplomas to the graduates. 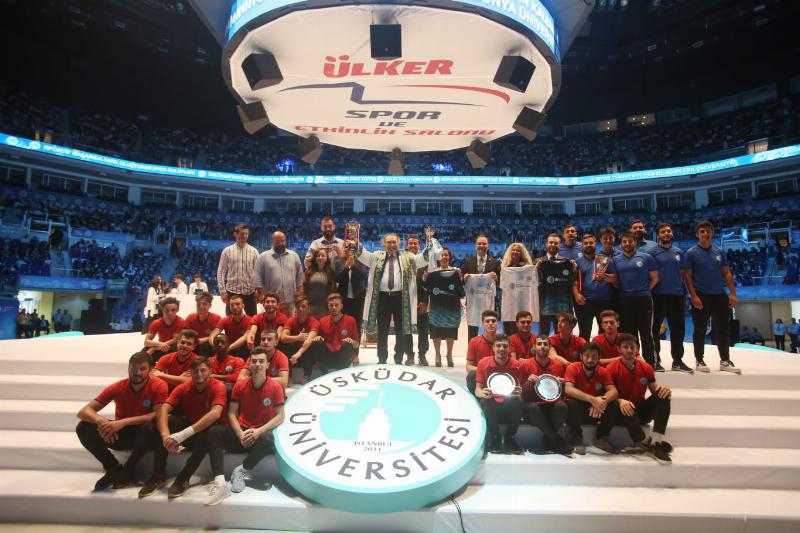 The athletes of football, futsal and basketball teams, who led Üsküdar University to success in the inter-university sports competitions, were also awarded at the ceremony. 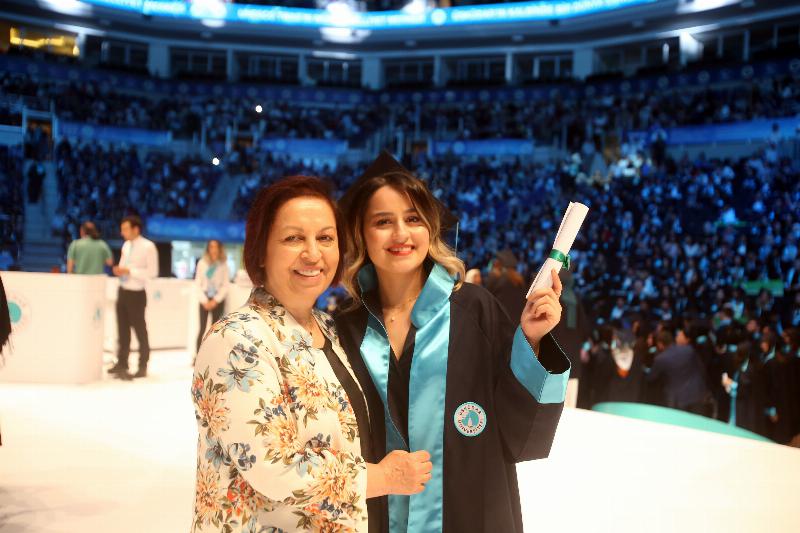 Presented diplomas to their daughters 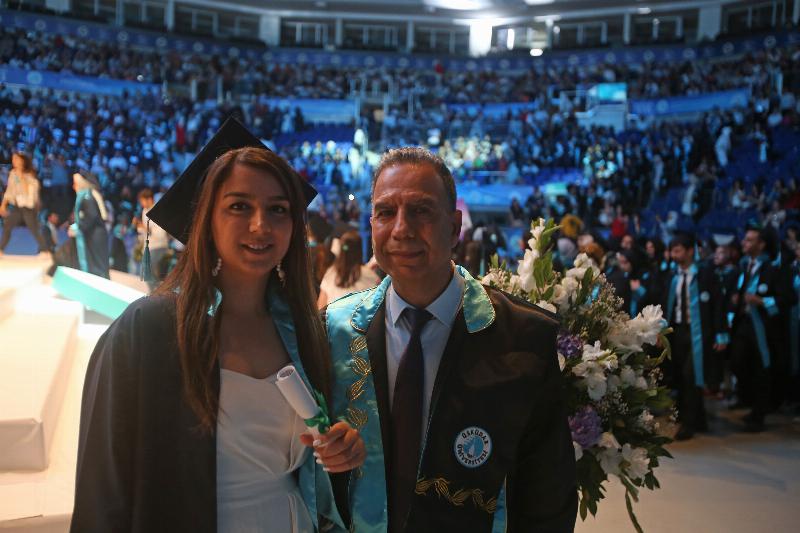 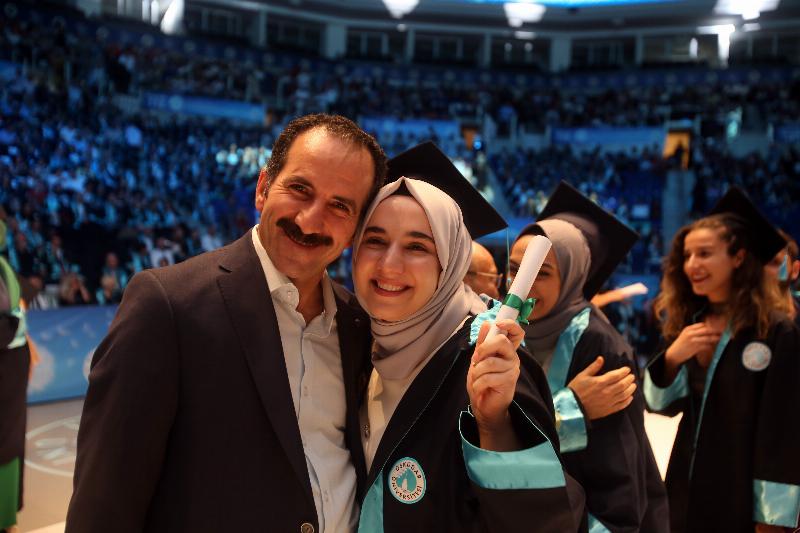 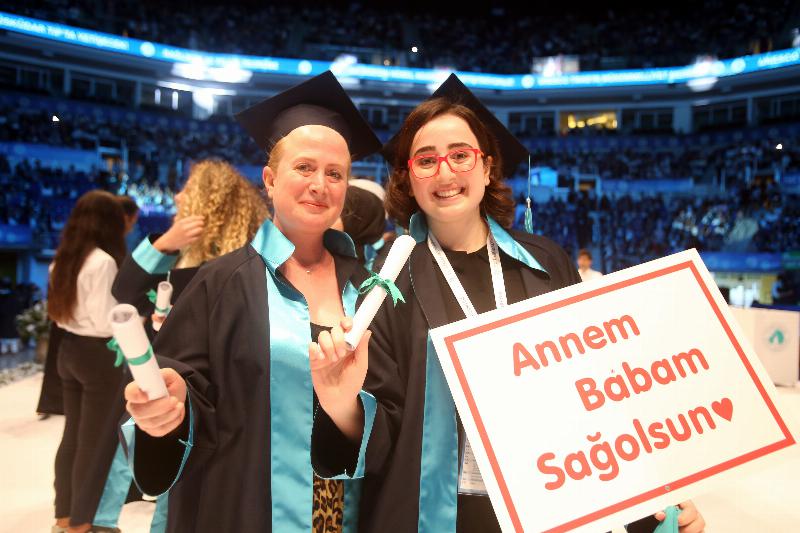 The mother-daughter graduated from the Department of Psychology and they experienced the joy of receiving a diploma together. Filiz Yılmaz and her daughter Zeynep Yılmaz, received great attention at the ceremony. 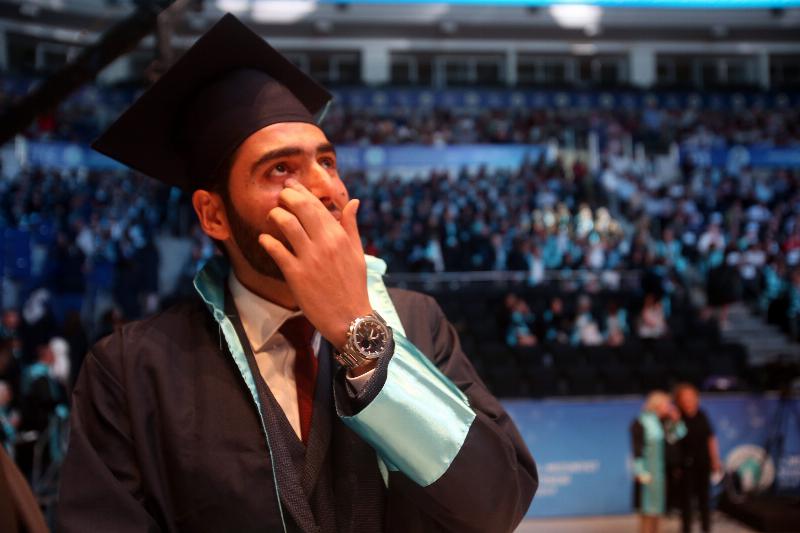 Hasan Wasfi Salman Dader, who graduated from the computer engineering department at the ceremony, experienced emotional moments with the video message of his family and relatives from Gaza, who could not attend the ceremony. Dader got emotional by the words of his family, who said how proud they were of him. 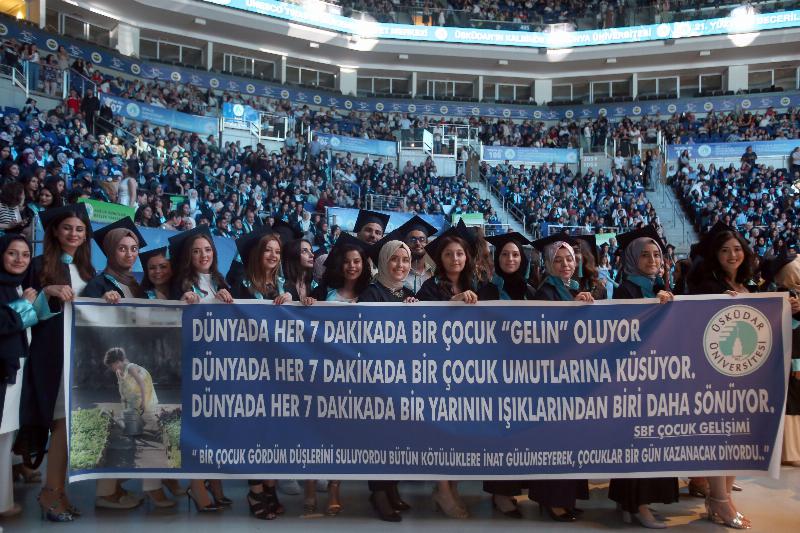