The search for innovation positively affects the brain

The experts discussed the disease molecularly, physiologically and neurologically at the Alzheimer’s Symposium organized by Üsküdar University Faculty of Engineering and Natural Sciences, Department of Molecular Biology and Genetics. Üsküdar University President Prof. Nevzat Tarhan stated that the brain is an organ that operation actively when it is used more. Prof. Tarhan said, “The brain produces growth factor in those who seek innovation. New connections are formed in the brain. Even though the person who uses the brain very actively, has genetic susceptibility, should not accept it as faith. The most emphasized factor on brain health is that the person should be open to new experiences and learning new things. Even when you're going home, don't try the same route. Nutritional style is also very important and all these are epigenetic factors.” 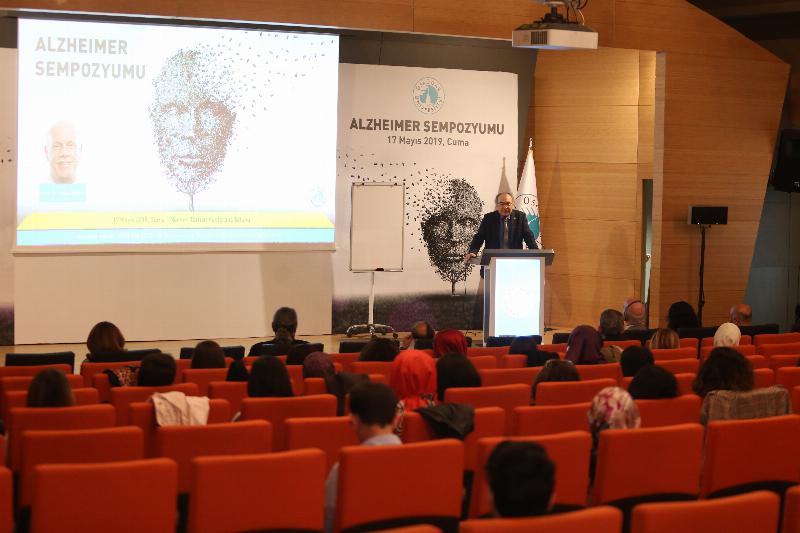 The Alzheimer's Symposium was held at Nermin Tarhan Conference Hall in Üsküdar University Main Campus and brought together experts working in this field. 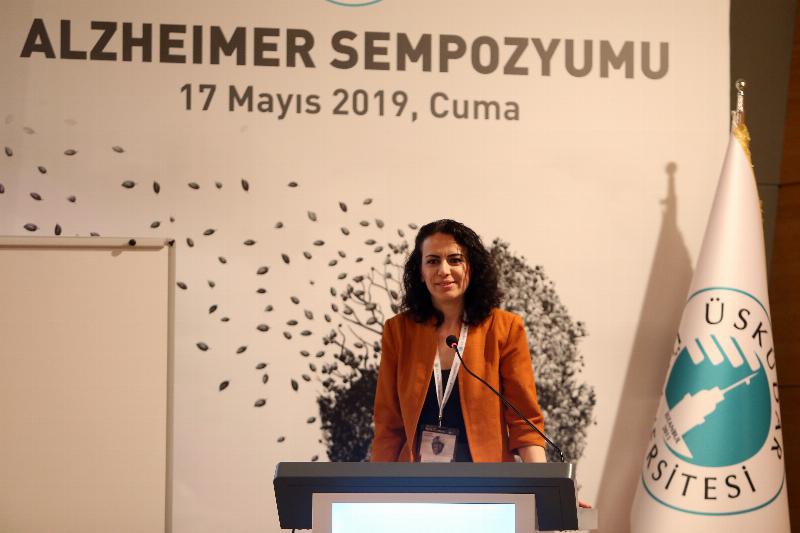 Üsküdar University Faculty of Engineering and Natural Sciences, Head of Molecular Biology and Genetics Department Assoc. Prof. Belkıs Atasever Arslan stated in her opening speech that valuable speakers will address Alzheimer's from a variety of aspects and continued as “Today, we will see different aspects of molecular, physiological and neurological aspects from a multidisciplinary perspective. We want you to be actively involved in discussions because every new question will initiate new ideas and projects.” 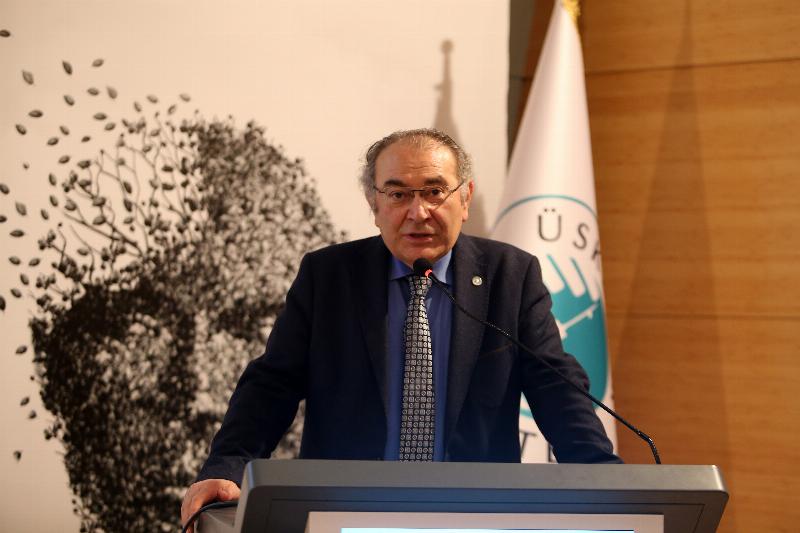 Prof. Nevzat Tarhan: “Alzheimer's is accounted for 60% of the dementia group”

Üsküdar University President Prof. Nevzat Tarhan stated that Alzheimer's is one of the R&D focus of Üsküdar University. Prof. Tarhan said, “Alzheimer's, schizophrenia, autism, attention deficit hyperactivity disorder are among our priority research areas. There are molecular, genetic and neuropathological dimensions and there is a psychiatric area that reflect to the clinic the most. Alzheimer’s is accounted for 60% and there are other types of dementia, but Alzheimer's has been diagnosed by a German. The disease is also remembered by this person’s name and the result of an observation. Observation is very important in medicine. It is important to recognize the details that no one has ever seen, and that is how the discovery works. You have to think about innovation and make connections with discoveries.”

Prof. Nevzat Tarhan: “Brain is an organ that operates as you use it”

Prof. Nevzat Tarhan stated that Alzheimer's disease is related to the deterioration of the brain's memory related hippocampus region. Prof. Tarhan continued, “Amyloid accumulates plaques but the experience is reflected in the clinic related to Alzheimer's. A mathematics professor in California, was playing chess, and was thinking about the aftermath of the 8 moves and after a further 5 moves, he thought that he might have a problem with his memory and went to see a doctor for this. The controls did not show any signs of dementia or Alzheimer's disease but after professor died and they examined the brain and found massive Alzheimer’s plaque. The professor should have had Alzheimer's symptoms and memory disorders, but he had never experienced any. They found that the professor was a person who was using the brain very actively. Brain is an organ that operates as you use it. Alzheimer's plaques are formed in the brain but as one uses the brain, brain starts to form collateral pathways and forms sideways. Due to the new ways of using the brain, the new synaptic firing starts immediately. The brain produces growth factor in those who seek innovation. New connections are formed in the brain. Even though the person who uses the brain very actively, has genetic susceptibility, should not accept it as faith. The most emphasized factor on brain health is that the person should be open to new experiences and learning new things. Even when you're going home, don't try the same route. Nutritional style is also very important and all these are epigenetic factors.”

There's a lot to discover in Alzheimer's

Prof. Tarhan indicated that Alzheimer's is a new discovery site and said, “They asked Newton what he was planning to discover more; he said ‘We are just like kids playing by the sea.’ This is how I identify the discoveries made in Alzheimer's now. Metaphorically, we're on the edge of the Alzheimer's sea. There is a lot more to discover.” 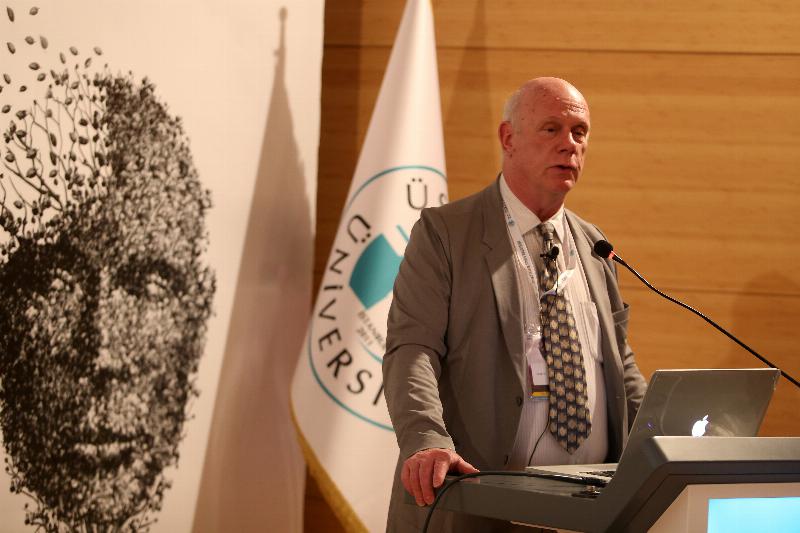 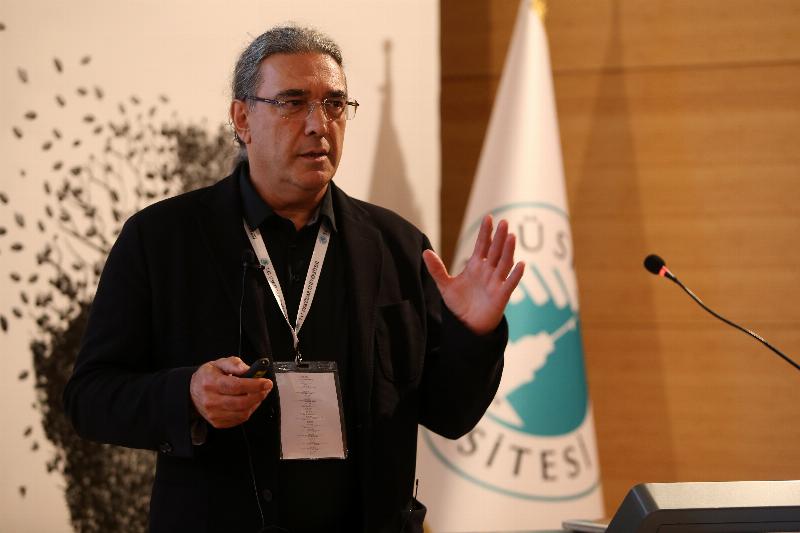 Koç University Faculty of Medicine professor Prof. Kemal Türker gave a speech on “Motor Functions in Alzheimer’s Patients” and stated that the likelihood of Alzheimer's disease occurring while aging, is quite strong. He continued as, “Alzheimer's will increase more. Alzheimer's has to do with aging. Muscles weaken while aging. The longer we use it, the stronger it gets. Distortions begin at the intersection of nerve muscle. Fast muscle fibers are more affected. The characteristics of the motor units are changing. The pulse frequencies are decreasing and therefore it gets weakened.”

Prof. Kemal Türker expressed that Alzheimer's patients had shorter, slower steps in the comparative studies. He continued, “They will wait longer between the steps. It was found that the elapsed times for waiting and stepping between the steps were more uncertain.” Prof. Kemal Türker mentioned that the studies have shown the connection between oral and dental health and Alzheimer's. He said, “There is evidence that there is a connection between Alzheimer's and the tooth being pulled. Paying attention to dental and oral health may help preventing Alzheimer's. There is a negative relationship between loss of teeth and loss of thought capacity. Many studies show that multiple tooth loss reduces the thinking capacity.
Healthy dental and oral health reduce the rate of mental decline.”

Explained the research with Alzheimer's patients

Prof. Nihan Erginel Ünata: “ The rate of patients with dementia in Turkey is 2%”

Prof. Nihan Erginel Ünata from İstanbul University Aziz Sancar Research Institute of Experimental Medicine, gave a speech on “Alzheimer’s and Genetics” and stated that the disease is one of the most common neurodegenerative diseases. She continued, “Neurons have progressive and irreversible loss. The number of dementia patients is expected to increase by 2 times every 20 years. The rate of patients with dementia in Turkey is 2%. Alzheimer is the most common form of dementia. This rate varies between 50-70%.”
Prof. Nihan Erginel Ünata said the genetic causes of Alzheimer's are still unclear and the studies are ongoing.

The following lectures were also broadcasted on Üsküdar University Television;