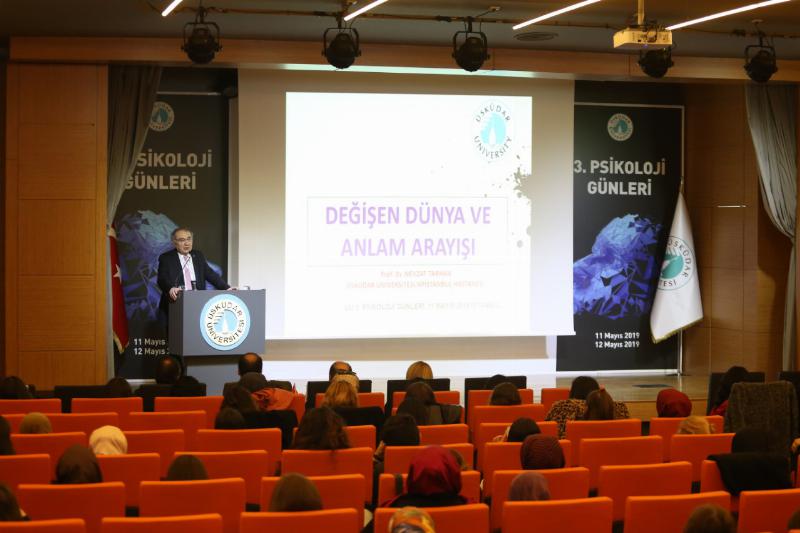 The 3rd Positive Psychology Days, were organized at Üsküdar University. Üsküdar University President Prof. Nevzat Tarhan gave a lecture on “The Search for Meaning in a Changing World”. Prof. Tarhan mentioned that modernism is suffering a civilization crisis and continued as, “As a result of the serious psychological variables of hedonism and narcissism; loneliness and unhappiness emerge. Life-long loves will be possible by ensuring the balance of serotonin and dopamine. Love and cooperation equals to lifelong love. So people who have managed to establish good cooperation can make love mature and sustainable.”

The conference was held at Üsküdar University Çarşı Campus Emir Nebi Conference Hall and the welcome speech was conducted by Üsküdar University Faculty of Humanities and Social Sciences, Head of Psychology (English) Department Asst. Prof. Asil Özdoğru. Özdoğru remarked that the theme of the 3rd Psychology Days’ is “Changing World, Transforming Human”. He also said the conference was going to be given by seven experts. 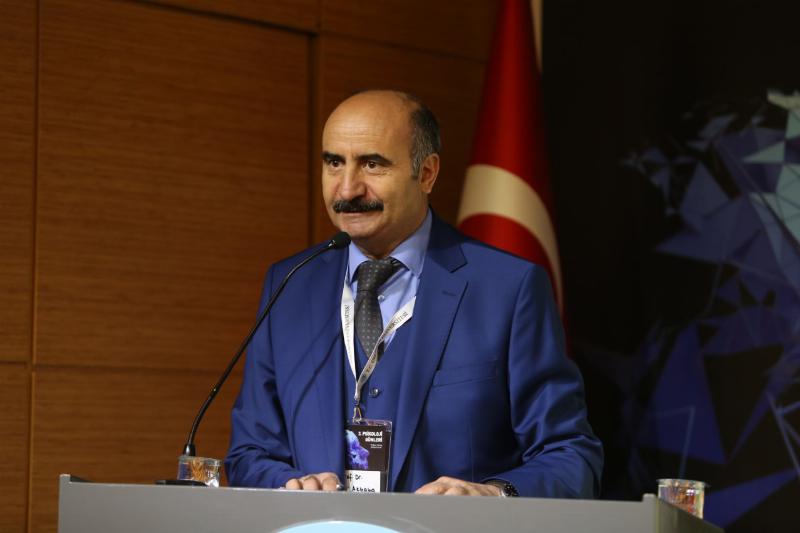 Prof. Sırrı Akbaba: “A psychology approach, which acknowledges that human has a soul, should come into play.”

Üsküdar University Advisor to the President Prof. Sırrı Akbaba also delivered a welcome speech and said that they aimed to bring young psychologist candidates from different universities together and exchange ideas. Prof. Akbaba continued as, “Thus, we want to see our strengths and weaknesses and these weaknesses to strengths.” Prof. Akbaba stated that the perspective of the schools of psychology from the past to the present is mechanic and it is overlooked that the human being has a soul and that they perceive human as a machine. Prof. Akbaba said, “We cannot give the true value to human beings from a single point of view. An understanding of psychology, which acknowledges that every human has a soul, needs to come into play. In the 21st century we believe that human beings are engaged in a sense of psychology that offers a real identity of human beings.” 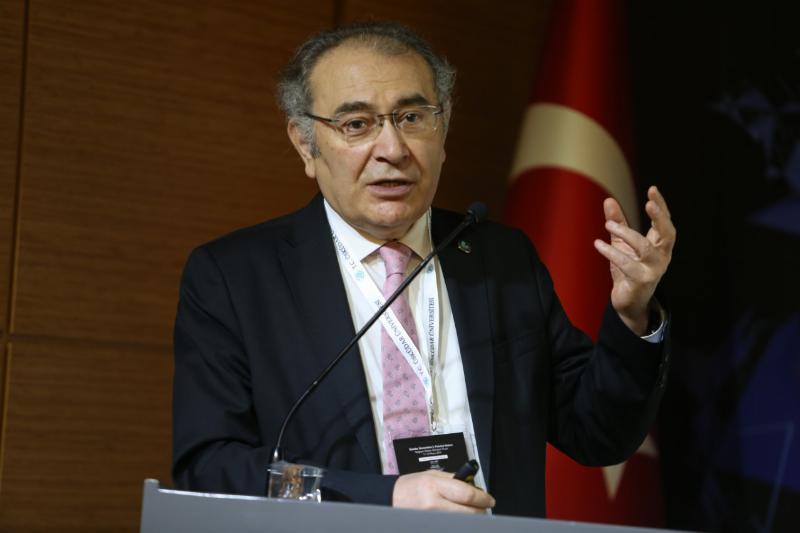 While houses grew, families got smaller

Where does Positive Psychology originate from?

Prof. Nevzat Tarhan revealed the facts about the situation of young people and children in the data from the US Children's Defense Fund in the 2000s. Prof. Nevzat Tarhan remarked the following; “Each day; 3 young people under the age of 25 are dying of AIDS and 25 of them are infected with HIV. 6 children are committing suicide. 342 children under the age of 18 are arrested for violent crime. 2 thousand 833 children are leaving school. At that time, the government was panicking; a $ 5 million budget was assigned to Seligman and his team. Positive Psychology Congress is held about the work completed in 2008.”

We have been teaching Positive Psychology since 2013

Modernism is suffering a crisis of civilization

Prof. Nevzat Tarhan said that in the world today, modernism is experiencing a civilization crisis and mentioned that the California Syndrome is common in the California area. Prof. Tarhan noted, “Hedonism is an understanding that establishes the search for meaning only on pleasure. There is a new personality type that experiences the crisis of being, although he/she has many things, is not happy. This type of people connects happiness to external causes. The person who chooses hedonism as an ego ideal, puts the self at the center of the world. Hedonism, narcissism, serious psychological variables of the age are a result of loneliness and unhappiness emerges.”

The front region of the brain; It's the captain's lodge

Prof. Nevzat Tarhan mentioned that the human brain decided that the 4D rule was valid when making a decision. Prof. Nevzat Tarhan said, “It makes decisions based on emotion, thought, behavior and values. There was a revolution in psychology in the 1990s. Emotions turned out to be measurable. Happiness is the management of the chemistry laboratory in our brains. The front area of the brain is what makes the human being. It’s the captain’s lodge. Decision-making, focusing, self-control, self-management, empathy are controlled by this region. This region is innately undeveloped and has potential. This region of the brain is being developed later.”

Prof. Nevzat Tarhan also drew attention to the chemistry of love. Prof. Tarhan noted that dopamine and serotonin should be maintained in balance. Prof. Tarhan said; “Dopamine is such a chemical that the hormone about pleasure in the brain. As dopamine increases, attention and focus are increasing. When a person falls in love, that person just focuses on that person. If serotonin is reduced while dopamine increases, obsessive love is emerging this time. There is an increase in life energy. Turning pathological love into mature love is about developing the frontal part of the brain. In such cases, life-long love arises. Where's the secret? Serotonin needs to learn to balance dopamine balance in the brain. Therefore, love plus cooperation equals lifelong love. So people who have managed to establish good cooperation can make love mature and sustainable.”

The search for meaning is a journey of choice 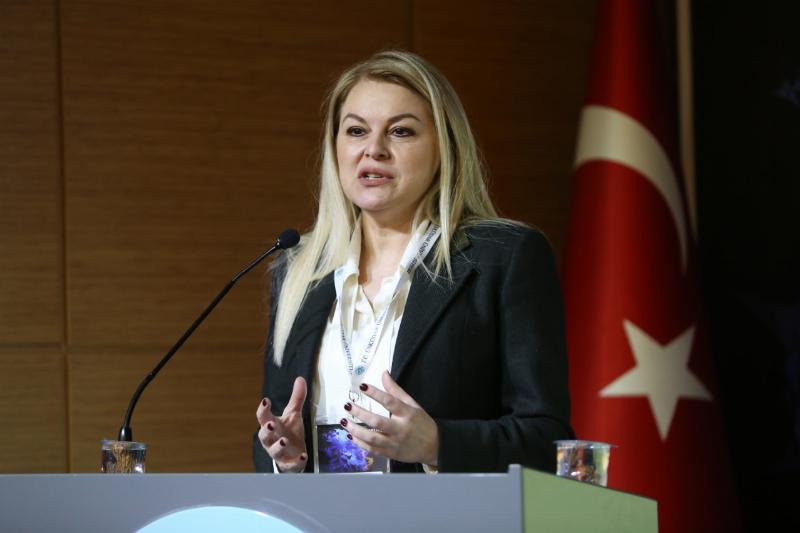 Üsküdar University Dean of Humanities and Social Sciences Prof. Deniz Ülke Arıboğan gave a lecture on “Psychology of Changing Politics on Authoritarianism, Radicalization and Malpractice”. She told the process of political psychology from the 1800s to the present. Prof. Arıboğan evaluated the changes in the world in terms of political, economic and social relations. Prof. Arıboğan stated that after September 11, the balances had changed and states were looking at the issues through security and said the following:

“Not only the World Trade Center is collapsing. The paradigm of globalization is collapsing. Issues such as cooperation, production and consumption are not important. Now the basic issue is a terrible threat. There's such a thing as al-Qaeda and it can shoot anyone at any moment. Total military spending in the world rushes from $ 700 billion to $ 1.68 trillion. All the economic resources of the world are being pumped into military resources where education goes on such channels as health cosmetics. Now we see the world on the axis of security. There are threats. We have fears. When we are afraid, our political behavior is changing. When we are afraid, we begin to see any kind of authoritarian regime legitimate. When we're scared, it's starting to look bigger than the thing that seems to be the enemy. Radicalization is a group of radical ideas that defines the enemy and on the other side has a concept of state that has to defend us. There's no problem with being authoritarian. We are afraid because there is no problem in obtaining our rights because we have security concerns. Al Qaeda ends, ISIS begins, MISID will be released tomorrow. This state’s authority gains more legitimacy and it means that the antidemocratic methods it adopts are accepted without much debate. While the Berlin wall was destroyed in the world, only 12 countries have a border wall, and today, 77 countries are turning their borders with walls.” 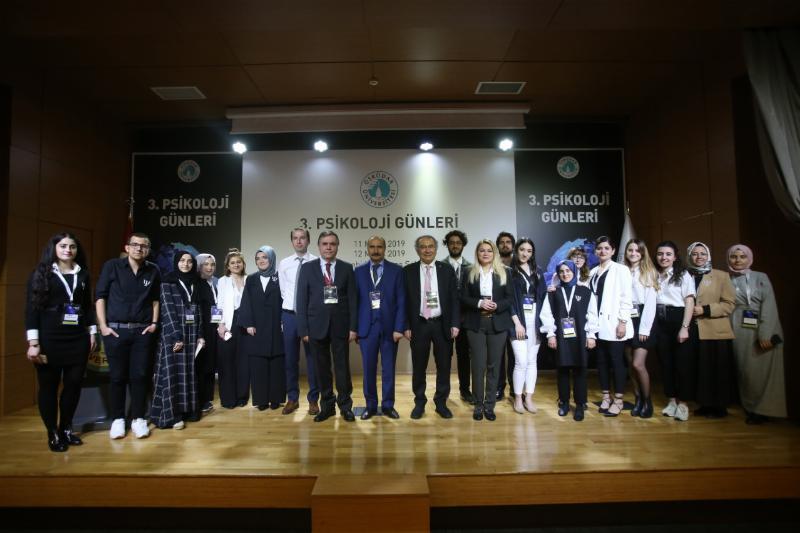 Psychology was discussed in different aspects