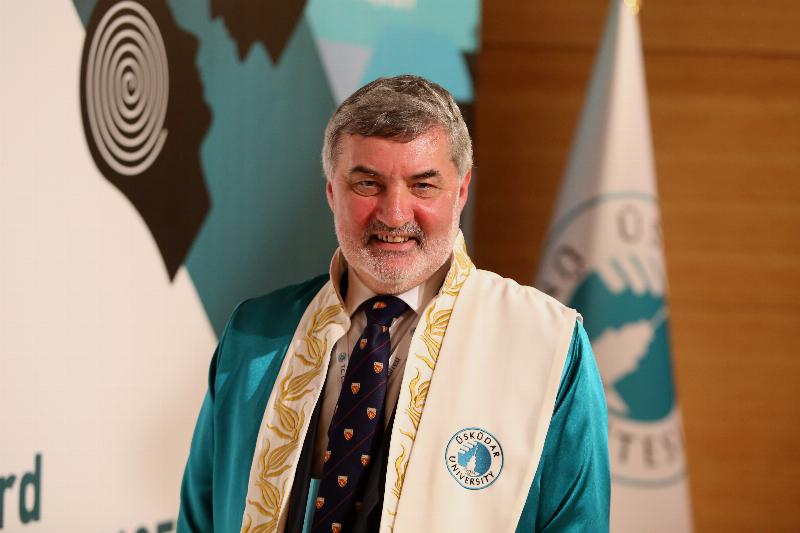 Leading the Northern Ireland Alliance Party for 11 years, Prof. Lord Alderdice played an important role in negotiating the Belfast / Good Friday Agreement of 1998 in the development of the Irish Peace Process, and in 1996 he was chosen as the youngest member of the House of Lords by the Queen of England for his efforts. Prof. Lord John Alderdice came to Turkey as Üsküdar University’s guest of honor and made statements specifically for Milliyet newspaper.

Prof. Lord Alderdice is presented Doctoral Honoris Causa by Üsküdar University Senate. Prof. Lord John Alderdice who is a Faculty Member of Oxford University, is deemed worthy of an honorary doctorate by the Üsküdar University Senate for his scientific work in the fields of political psychology and psychiatry as well as the projects he developed in the field of international relations and his unique contributions to world peace. According to Prof. Lord John Alderdice the conflicts in Syria will continue for many years and therefore an absolute world peace is definitely a dream.

Prof. Lord John Alderdice stated that “The conflicts in Syria will continue for many years, and an absolute world peace is definitely a dream.” And regarding the powers of the world, he added; “France is a nuclear power, a permanent member of the UN Security Council and has an active and significant military capacity.  Germany has none of these three things.  These are major countries which have the capacity to move the world toward peace or war.  They cannot deliver peace without working together and with others.   These countries also have very different agendas, different capacities and different levers of power.  I am not sure that it helps to put them together in this way.”

When asked about Turkey’s current position against terrorism, Prof. Lord John Alderdice replied that Turkey should turn to regional cooperation, especially in the southern border in the fight against terrorism. He continued as; “I doubt that Turkey can successfully address the various current threats without engaging constructively with her neighbors.  Most of the threats are transnational or cross-border.  The whole region is an increasingly chaotic and violent place.  Addressing these problems will involve the major states in the region sitting down together to resolve their differences and if they are going to be able to work together on terrorism and political motivated violence. When it comes to the feud between Israel and Palestine, I fear that the 2-state solution is dead.  Israel shows no interest whatever in a negotiated peace agreement on a viable 2-state basis.  Until this reality is addressed by the regional players and powers as well as the two sides, there will be no peace between Israel and the Palestinians.”

In terms of the violence and threats in the Middle East and how these affect the individuals, Prof. Lord Alderdice noted the following; “Violence and threats normally make people angry and frightened and they tend to search for security and certainty.   In the religious realm this often means a more conservative and even fundamentalist approach to religion.  It does not usually mean that people become more spiritual, but more committed to a particular religious identity.”

“The Security of Peace”

“It is certainly a dream, but the question is whether it is a dream that could ever be fulfilled!  We will never come to point where everyone agrees, however we could perhaps come to a place where most of the major areas of disagreement could be addressed politically rather than violently. After the fall of communism, it seemed for a while that we were moving in the right direction, but the last few years has seen a very serious reversal and we are now moving into a very dangerous period, not only because of the threats, and actuality, of war as we have known it in the past, but also the new hybrid forms of warfare including in cyber-space.

France, India and Pakistan, Iran and Saudi Arabia, Turkey and Egypt all play significant roles - just to give some of the obvious examples.
Wars will not end, but we can hope, eventually, that we find ways to conduct our disagreements in a different and less destructive way. Just now however we are moving into a period where the likelihood of wars is increasing not decreasing.”

“I think the EU is becoming somewhat unstable.   It may shed some members and it could at some point disintegrate, but it is too early to know what the next twenty years or so will bring.  The UK Government always supported Turkey’s membership application to the EU, but it was opposed by other countries.  I agreed with the UK position, but of course now the UK is leaving the EU that support will be even less effective. The old rules of politics have largely dissolved in recent years and it is increasingly difficult to predict the next six months, never mind the next 20/30 years. I do however believe that we are going to experience enormous and unprecedented change and speed of change and that is unlikely to come peacefully.  Some people will welcome change, while others will oppose it, and for everyone it will be uncomfortable and potentially dangerous.”