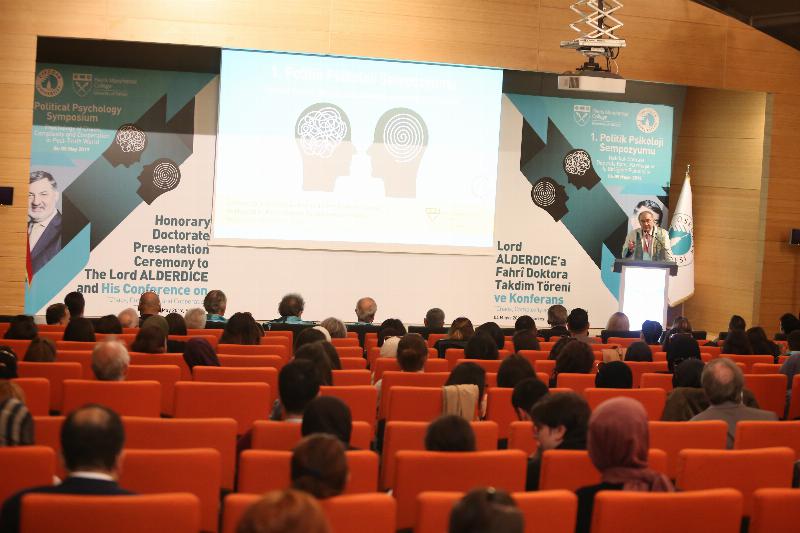 The 1st Political Psychology Symposium organized by Üsküdar University Political Psychology Application and Research Center in collaboration with Oxford University, brought together academicians from both universities. The theme of the symposium was “Psychology of Chaos, Complexity and Cooperation in Post-Truth World”.  In addition, Doctoral Honoris Causa was presented upon Oxford University Faculty Member Prof. Lord Alderdice by Üsküdar University Senate within the scope of the symposium. Prof. Lord John Alderdice was awarded an honorary doctorate by the Üsküdar University Senate for his scientific work in the fields of political psychology and psychiatry as well as the projects he developed in the field of international relations and his unique contributions to world peace. 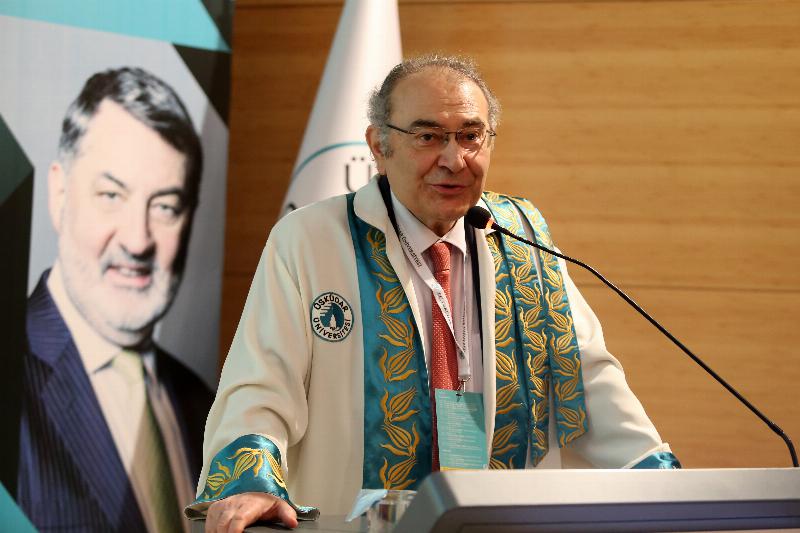 Üsküdar University President Prof. Nevzat Tarhan made the welcome speech of the symposium organized in collaboration with Üsküdar University Political Psychology Application and Research Center and Oxford University. Prof. Tarhan said that they planned two important events for the day which included the 1st Political Psychology Symposium as well as Doctoral Honoris Causa upon Lord Alderdice. Prof. Nevzat Tarhan added, “Long journeys start with one step and fires start with a spark. As a university, we are beginning to work in the scientific field with the authority of political psychology. I believe this is crucial for the world and we will also present Honorary Doctorate to Dear Lord Alderdice, who has worked hard on this issue. I would like to thank you for accepting our invitation.”

Prof. Nevzat Tarhan: Certain steps should be taken to make the world a better place.

Prof. Nevzat Tarhan stated that political psychology is an important field and he continued, there is a struggle between good and evil in the world. You see in cartoon films, sometimes good ones win, sometimes bad winners. This is a struggle that has existed since the existence of humanity. Even in recent years this struggle between good and evil is called social entropy. As you know, entropy is the second law of thermodynamics. According to this law, which is defined as the rise of entropy, the universe is going from order to disorder. In behavioral entropy, the universe is moving from order to disorder if there is no external intervention, but it gets in order if there is outside intervention. If we do not work in the garden of our house, the garden is covered with couch grass. If we don't light this place, it becomes dark. If we don't warm this place, it gets cold. In the universe, entropy exists in the field of psychology. If we don't increase the good and beautiful things in the universe, the evil rises. Therefore, if people who claim to be good, do not act then comes back as evil. There is a saying in Anatolia. The best way to fight the dark is to light candles. For this reason, political psychology stands behind the idea that if we do not strive for good in the world, the world will turn evil. It is necessary to take steps to make the world better and livable place. 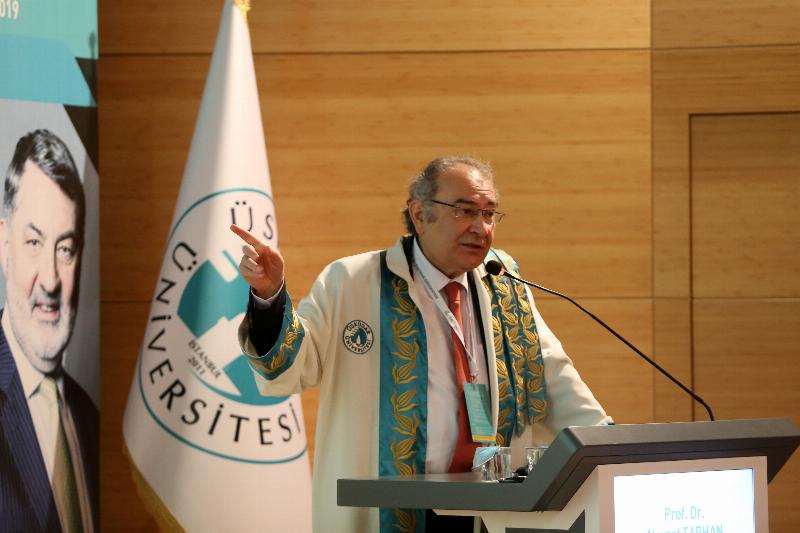 Prof. Nevzat Tarhan: “I have a dream. World parliament should be established.”

Prof. Nevzat Tarhan reminded Turkish thinker and sociologist Cemil Meriç’s statement. Prof. Tarhan said, “Cemil Meriç stated ‘Our greatest enemy is prejudice, the biggest need is dialogue.’ Think of the fights in society and in the family. The Pareto Principle is the 80-20 rule. In other words, if you solve 20% of the problems, the remaining 80% will be solved. This is also the case in the political arena. Politicians remain distant to psychology. But we should do our part. There is such a need in the world. I have a dream. When we look at the struggle for civilizations in the world, I think that for a world peace in the world, world parliament should be established. If every country is equally represented in this world parliament, problems in the world will be solved. The best way to combat terrorism, ethnic and religious radicalism is to initiate open dialogue area. When people start to have dialogue, they see that most of the problems can be solved.

“Center of Political Psychology will realize my dream”

Prof. Nevzat Tarhan shared that they started Political Psychology Application and Research Center by Üsküdar University. Prof. Nevzat Tarhan said, “As Üsküdar University, we claim to be a bridge between the past and the future, between east and west and make a contribution. Political Psychology Application and Research Center will realize my dream.” 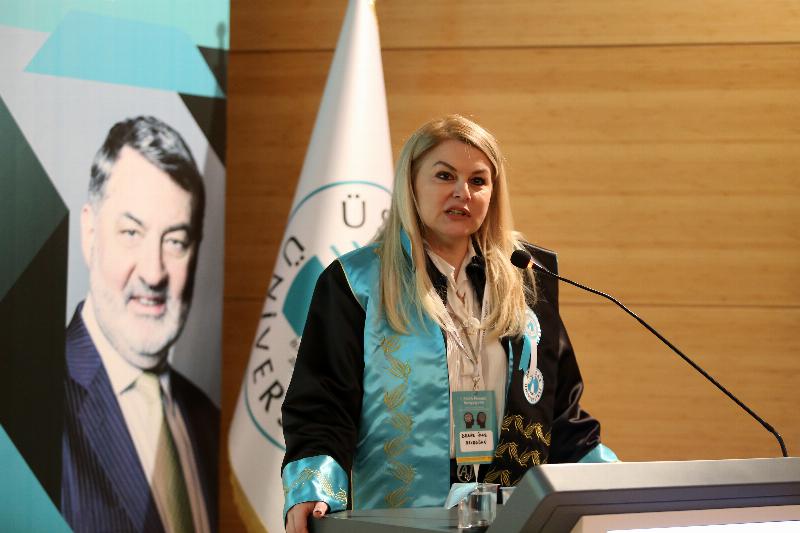 Prof. Deniz Ülke Arıboğan: The field of International Relations has started to enrich with a political psychology perspective.

Üsküdar University Dean of Humanities and Social Sciences Faculty, Director of Political Psychology Application and Research Center Prof. Deniz Ülke Arıboğan also gave a welcome speech at the symposium. Prof. Arıboğan stated that their aim was to bring a new dimension and perspective to the field of political psychology and continued as, “The field of psychology has been popular for the last few years because it is crucial to understand people, society and evaluate the psychology factors that direct its behavior. Nevertheless, the international relations discipline remained irrelevant. As standard, they tried to evaluate the relations of the world in the context of an interstate relations and tried to understand through diplomacy. Now international field is also enriched with this new perspective. The psychologies of societies, public perceptions, personality structures of leaders, historical traumas of societies, and narratives that built on national stories began to become vital.”

Prof. Arıboğan emphasized, “The political structure within the countries, their democratic understanding, the election processes of leadership, the perspectives of the leader were determined to a great extent by psychological environments and historical stories. For this reason, we are now using new technologies in order to understand the human brain through our stories. We will develop this field together. The motto of our university is to change the world through understanding human nature. We need to understand what we are dealing with and enrich this with different perspectives. Therefore, I hope that our Political Psychology Application and Research Center will be beneficial for this cause. Today we have very valuable speakers here. We will have a Doctoral Honoris Causa to be presented upon Lord Alderdice. Hopefully, we will conduct more events between Üsküdar University Political Psychology Application and Research Center and Oxford Crick Center.” 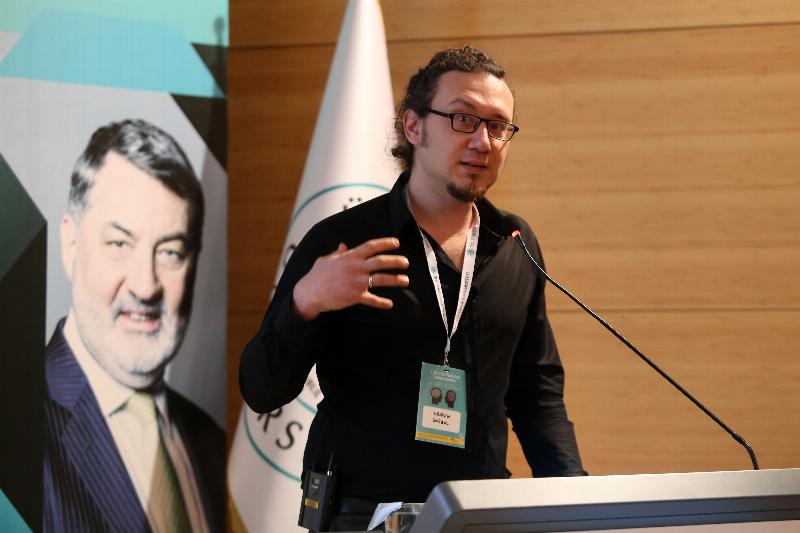 Emotion Map of Turkey was explained 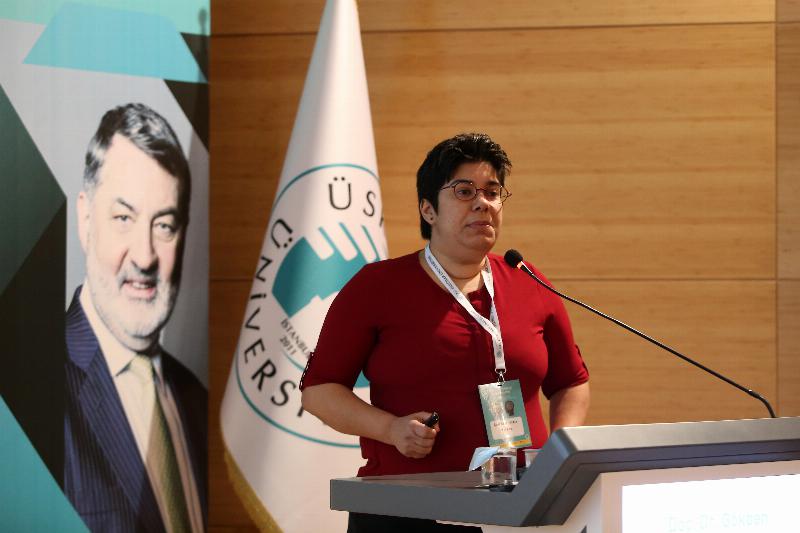 After the presentation, Doctoral Honoris Causa is presented upon Oxford University Faculty Member Prof. Lord Alderdice by the Üsküdar University Senate. Üsküdar University Dean of Humanities and Social Sciences Faculty, Director of Political Psychology Application and Research Center Prof. Deniz Ülke Arıboğan read the presentation of the reason behind the Honorary Doctorate. Prof. Arıboğan stated that Prof. Lord John Alderdice is deemed worthy of an honorary doctorate by the Üsküdar University Senate for his scientific work in the fields of political psychology and psychiatry as well as the projects he developed in the field of international relations and his unique contributions to world peace. Prof. Nevzat Tarhan presented the Honorary Doctorate Degree and wore his robe. 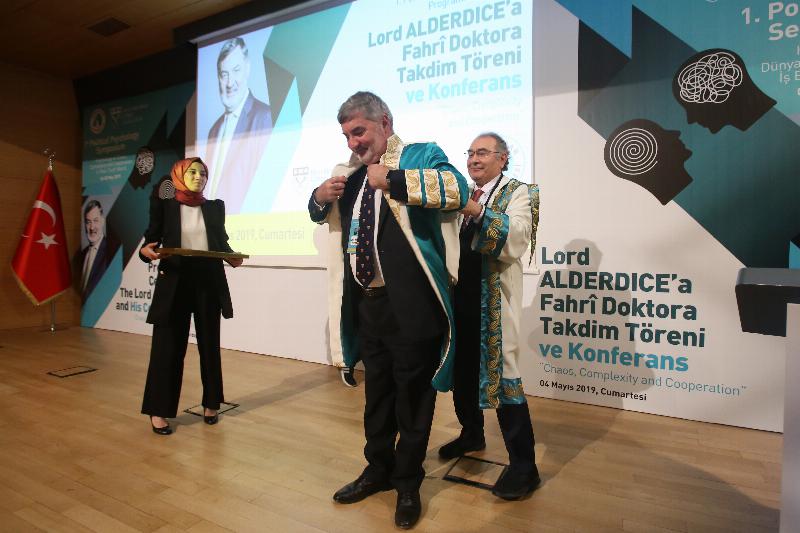 “I've tried to understand why groups exhibit behavior that could harm them. I wondered how can I better understand this situation. I turned to medicine and psychoanalysis. Of course, if you want to create an impact and influence, you have to be the head of a political party. There were two parties on one side of the group. One of them was the Protestant party and the other party was cohesive party. One of them was more moderate and the other was more extreme. But there was one party at the core. I thought it was the middle of the road, trying to bring people together. It was a therapeutic position, actually. What was the first thing we did here? We wanted to bring moderate people together from both sides. Could they find a compromise? In this way, can they distance the extremists? It sounded like a good idea. we tried it a few times, but it didn't work because the extreme people at the far end always did something to eliminate these efforts. We have searched for alternative ways and finally developed a new assay and analysis. The problem is not just a political problem. The problem is not a religious or economic problem. It's not just about justice. The problem is the history of the damaged relations between different glazes. 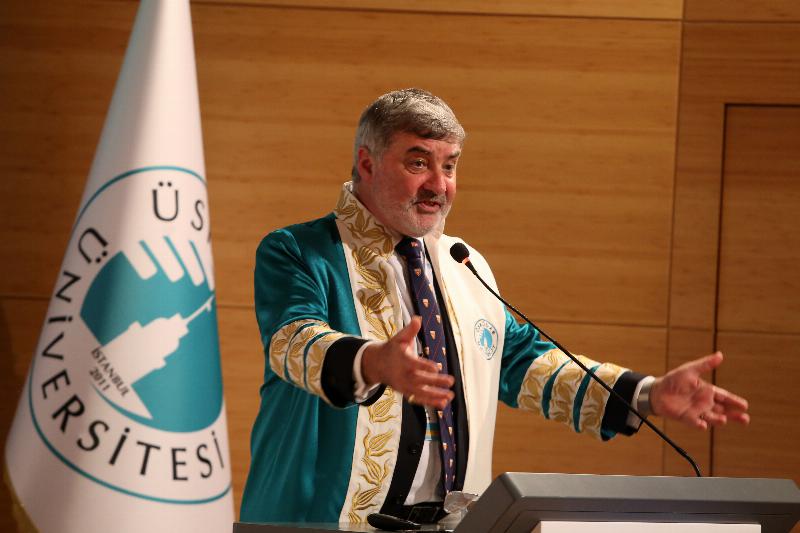 How can we tend towards to democratic politics?

So what are these deteriorating relations and the group? We focus on three different areas for a peace process. The first is Catholic Protestant nationalists. There was also a group in the south of IRA. One in London and one in Dublin, Ireland. We focused on three areas of the peace process by taking the representatives of these three relations. Usually people tend to be in a particular group, where they try to create a compromise. We are here to focus on external relations and be more unifying. We thought about how we could move towards democratic politics. Major areas have come forward. We discovered this first. We have to include people who are involved in violence because if we don't give them an alternative way, then they won't move away from violence. But if you go into democratic politics, if you provide an argument that will convince other people here, then we will be able to ensure your democratic participation. Thus, we can create a change that we can meet in the middle. Of course not everyone agreed with the idea. Democracy is not an area where everyone reaches consensus. When we talk about democracy, we are talking about an environment in which people adopt conflicts without killing each other. 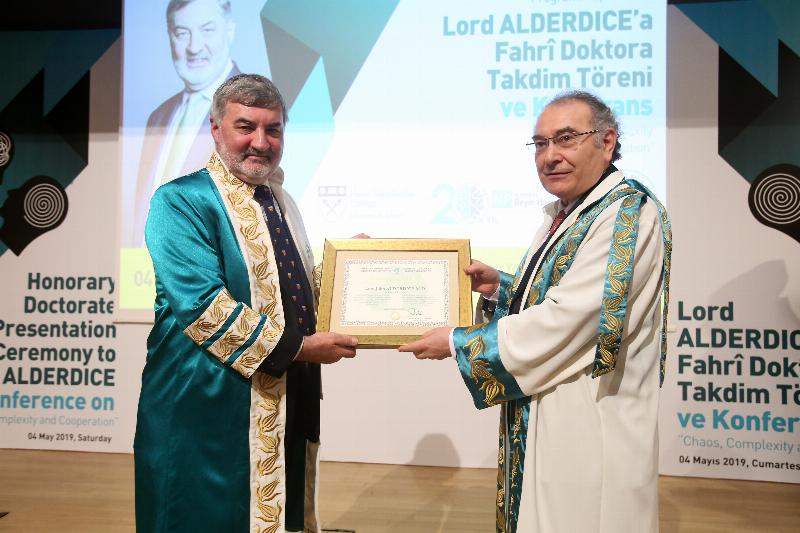 Emotions and thoughts need to be focused together.

Prof. Lord John Alderdice stated that they should live in cooperation both in personal and social evolution. He pointed out that in order to solve the problems in society, it is necessary to understand what the matter is. Prof. Lord Alderdice noted that societies need to focus more on justice. He continued as, “There are areas where we are not equal as humans, but there must be justice cooperation and community awareness. We can't ignore emotions and just focus on thinking. We must think both of them together. We must also understand faith to acknowledge what reality is and as we advance science, we must develop and advance faith as well. We should take the opinion of ordinary people as much as the elites and the hard part is that we all must be ready for change, as the right thing is to change. There is a chaos in every big change.” 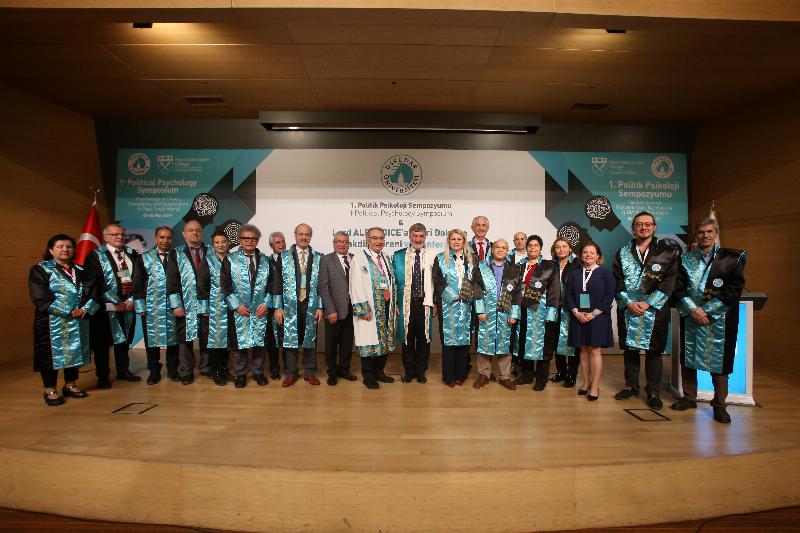 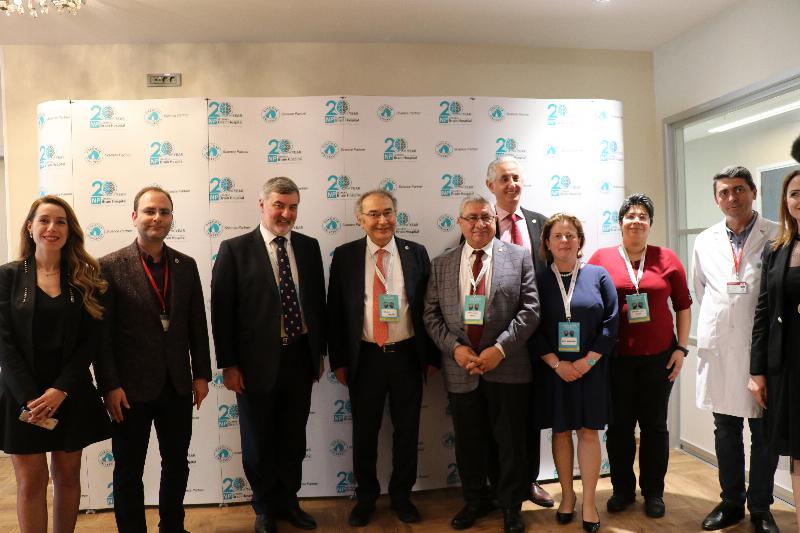 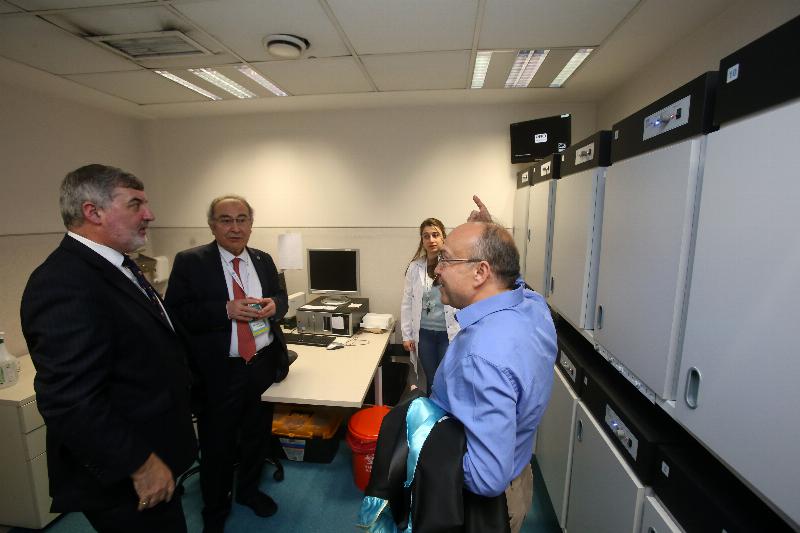 The symposium was  broadcasted live at ÜU TV and lasted for two consecutive days. Certificate of Attendance was presented to all the participants by Üsküdar University and Oxford University.