Youngsters competed with their ideas at the festival 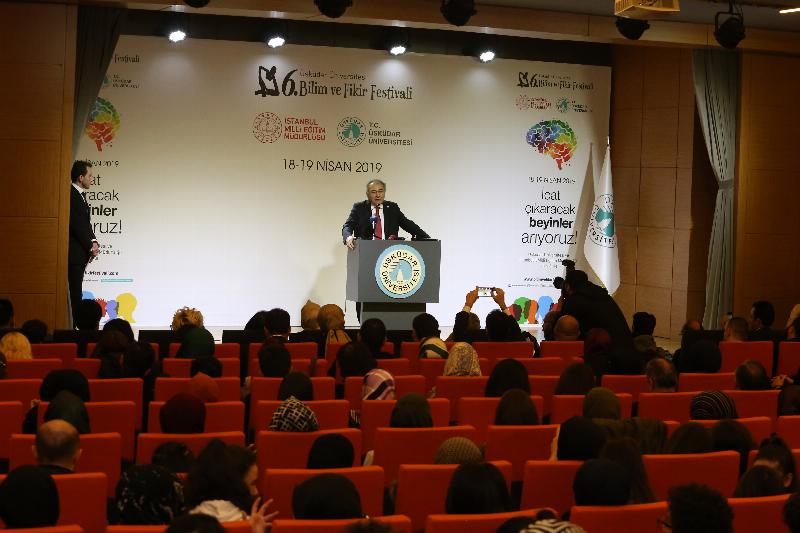 The Science and Idea Festival which is organized in collaboration with Üsküdar University and İstanbul Provincial Directorate of National Education, was organized for the 6th time this year.

Young people competed with their projects at the 6th Science and Idea Festival, which is intended for high schools, was organized in collaboration with Üsküdar University and İstanbul Provincial Directorate of National Education.

335 projects from 122 schools participated in the festival and 129 projects that passed the preliminary elimination competed. The festival, which aims to direct young people to observe, think, research and produce projects was executed with fun games, shows and concerts. 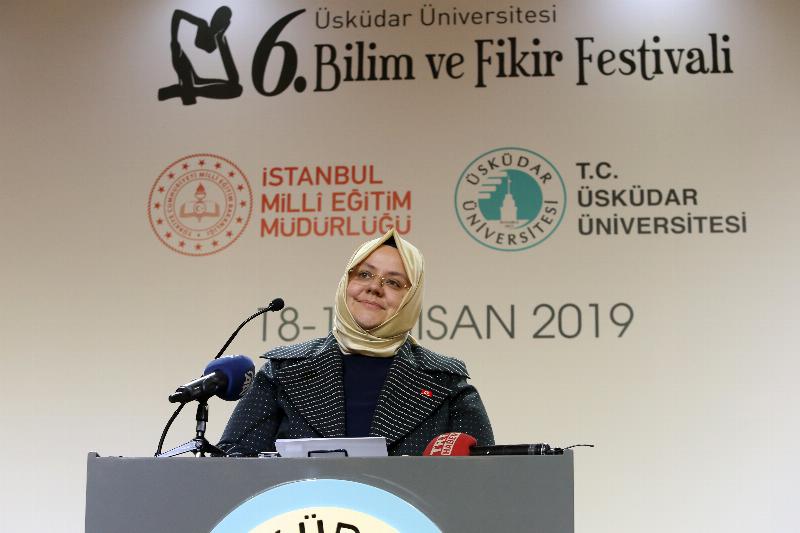 The Minister of Family, Labor and Social Services Zehra Zümrüt Selçuk attended the awards ceremony and thanked Üsküdar University President Prof. Nevzat Tarhan for inviting to such an important organization that targets the youth and the future of our country. Minister Selçuk stated that we live in an age where science and technology are now becoming a very strategic power for cultures and continued as following:

“You are the new generation. You are born with technology and you are growing with technology. You didn't experience the technology we saw in our time and you will experience the technologies that we will not. New technologies also offer a wide range of new ideas for young people. All this change necessitates a review of all processes in our education system. We should continue to prepare our children not only for our age, but also for the conditions of the future. We need to ensure that young people capture the spirit of the age by combining them with both national and spiritual values as well as science, technology, art and literature. It is also important to enable the goal for young people so that they will be able to reach that goal. This festival has an encouraging content that encourages all young people and also serves as a strong bridge between high school, secondary school students and the campus.” 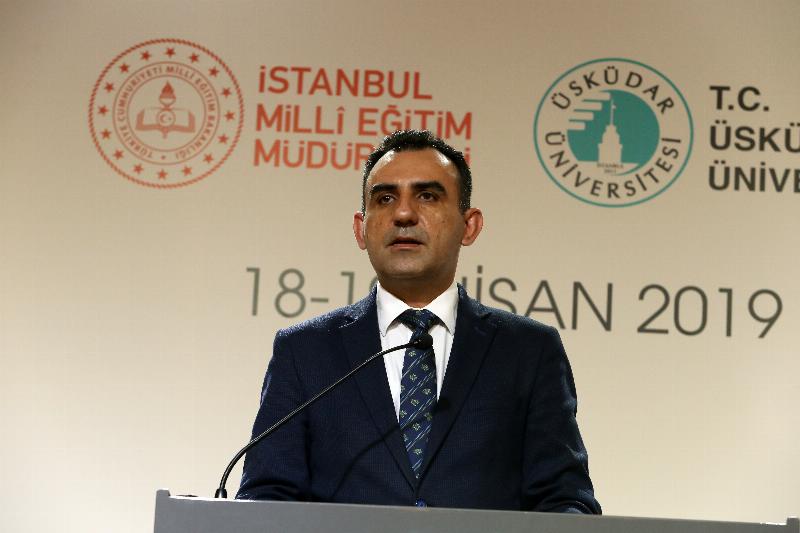 Levent Özil: “The important thing here is the exhilaration of scientific ideas.”

İstanbul Provincial Directorate of National Education Deputy Director Levent Özil stated that this year’s festival holds highly qualified studies and he said, “335 applications were made as a result of the announcement made among our high schools across the province.

Each of them are valuable and qualified projects. The aim of this event is to ignite the scientific ideas of our children rather than competing, their project-based studies, the evaluation of the studies they carried out in this context and their contribution to this process.

I would like to thank students and teachers. We think there is no winner and loser here.” 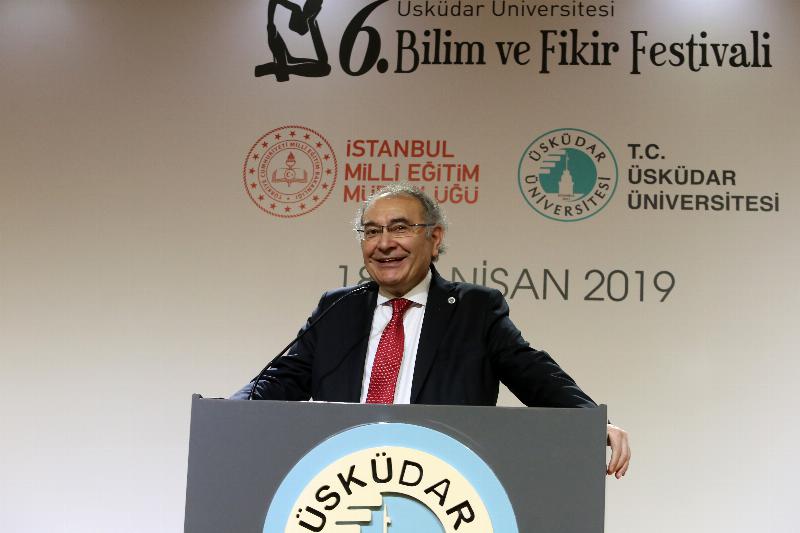 Prof. Nevzat Tarhan: “Entertainment and discipline should coexist together while learning.”

Üsküdar University President Prof. Nevzat Tarhan said that individuals learn a lot while competing. Prof. Tarhan stated that when the festival was organized for the first time in 2013, the developments in neuroscience signaled brain-based education and that they designed the competition in a festive mood. Prof. Tarhan continued as; “Brain-based training meant; ‘How does the human brain learn best?’ and brain-based educational studies are conducted. The conclusion of the brain-based studies was that human brain learns the most in fun, entertaining and disciplined conditions. So I thought, how do we train new generations in brain-based education, how do we prepare them for life? We searched whether there are festivals in the world that combine science and festival. We could find one only in America. On this, we decided to prepare students for this conceptual change in the high school period and to make them like to love the project, to be able to ignite the brain and make projections about their future and our National Education fancied the idea. Therefore, we conducted the first Science and Brain Festival in 2013.”

Prof. Tarhan: “Youth should also have projects related to society.”

Prof. Nevzat Tarhan said that while students compete at the festival, they in the meantime learn about project discipline, project culture and that life is a project. Prof. Tarhan continued, “We started out with the aim of contributing to the emergence of these beauties and gaining their future at a young age. Young people have projects related to themselves, but young people should also have projects related to society, future and life in general. There should be projects that are challenging for the youngsters. Given this reason, we have not only included science, but also health sciences and social sciences. In addition, we have also included family projects and social sciences.”

Prof. Tarhan: “There is a social risk, precautions should be taken.”

Prof. Nevzat Tarhan shared statistics about the family, which is the foundation of society. Prof. Tarhan said, “In 2001, the number of marriages in Turkey was 544 thousand. In 2018, it was 553 thousand. There is 1% increase but the divorce rate in 2001 was 91 thousand and in 2018, it reached to 142 thousand. Interestingly, young people have a tendency towards digital addiction. These are also a social risk. We wanted them to do social projects on these issues. We aim to contribute to projects that will also include the Ministry of National Education together with the Ministry of Family, Labor and Social Services. The attendance of the Minister encouraged us in this regard and it has been a great support as well. It is beneficial for these type of projects to continue.”

Prof. Tarhan: “Young people must have a life project.”

Prof. Tarhan expressed that young people also need ego ideal. He continued as, “Young people should have their own passionate projects in the first, middle and high school ages. While dealing with this passionate project, this actually meets other needs. The youngster who act to actualize the project can also own a job, earn money and be a spouse. But he /she should have a life project. Therefore, project based life approach should be taught to the youngsters. Modernism does not give a meaningful purpose to young people at this time. It only gives aims such as ‘own a car, a house and be famous’. It does not offer a purpose about helping others, giving happiness to others and being happy. A person who doesn't have ideals doesn't motivate the self, therefore conditions control them. The projects of our youth are very pleasing. I find it very promising for Turkey’s future that youngsters’ project culture increases on behalf of our country. I want this idea to spread to all our schools. I would like to thank everyone who contributed.”
Üsküdar University Vice President Prof. Muhsin Konuk provided information about the festival in his speech. He thanked the students who participated in the festival, teachers and school principals who encouraged them, teachers from the National Education Directorate who contributed to the evaluation of the festival and the academicians of Üsküdar University. 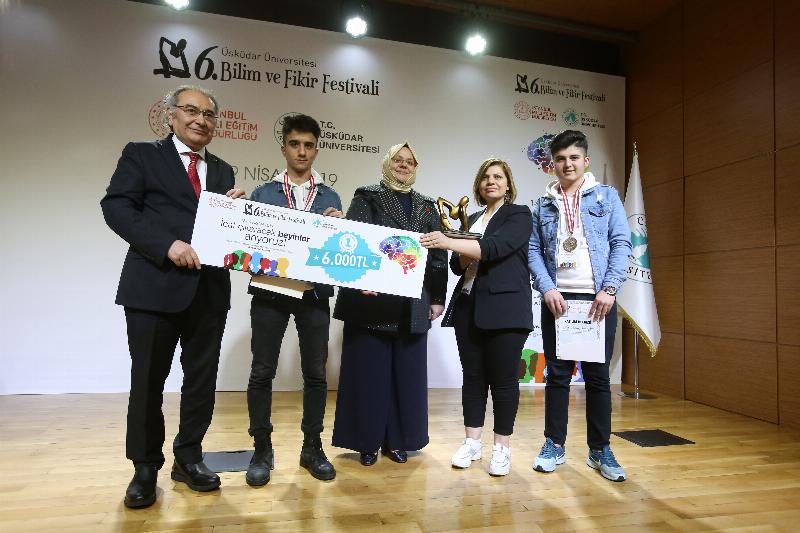 The award ceremony was held after the opening speeches. Üsküdar University Science and Idea Festival awarded in three categories of Health Sciences, Social Sciences as well as Science and Technology Sciences. 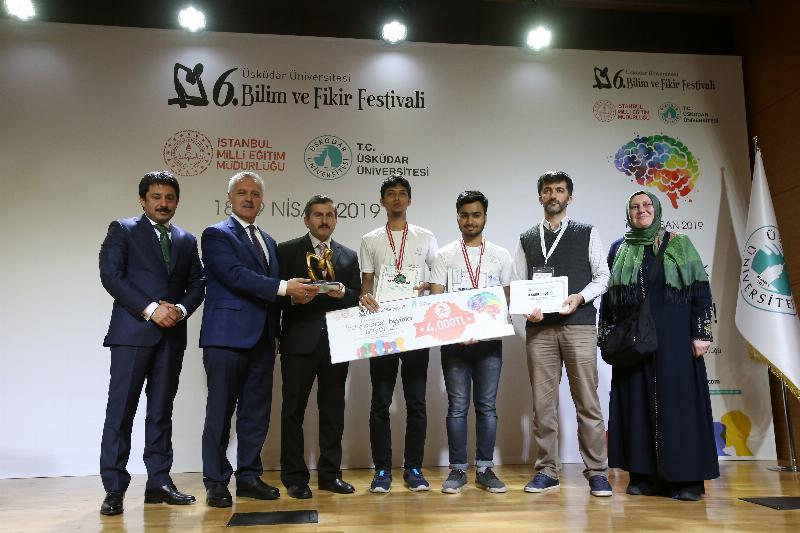 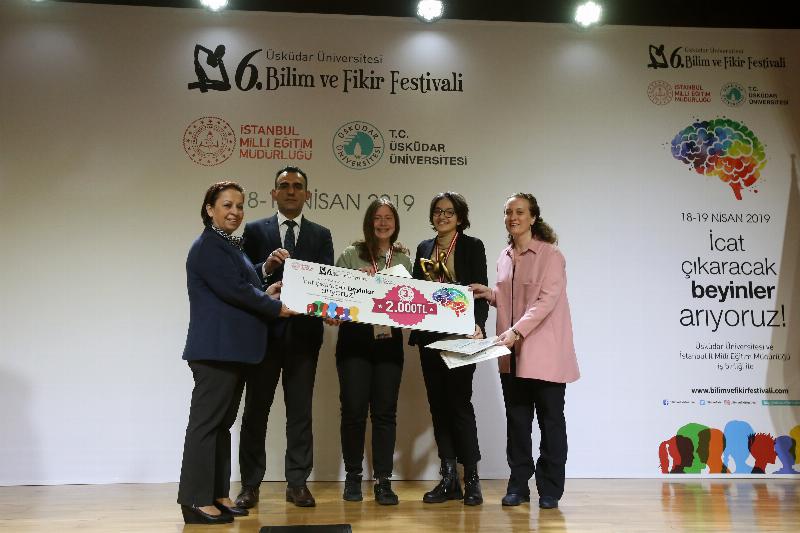 In Health Sciences category, Betül Sancaklı and İpek Kayrancıoğlu from Hüseyin Bürge Anatolian High School, under the supervision of their teachers Neslihan Savgaman received the third place with their project titled “Investigation of the Effects of Taflan (Prunus Laurocerasus L.) Fruit on Aging in Drosophila Melanogaster”. 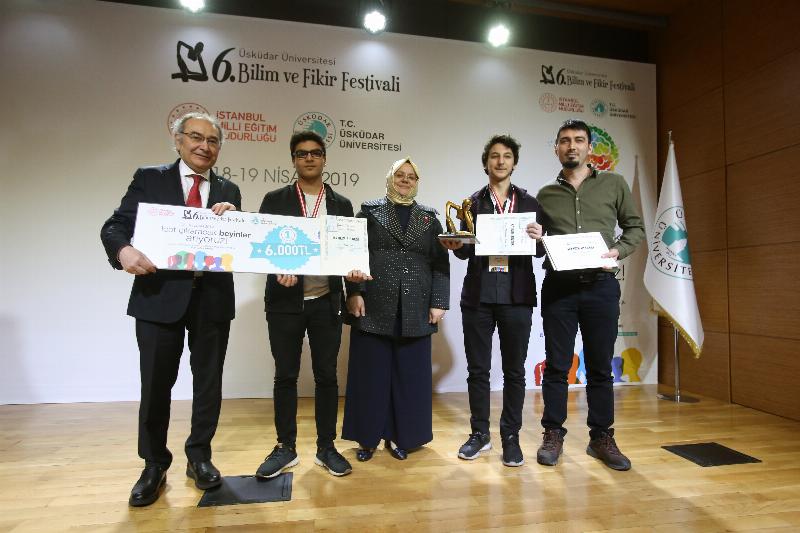 In Social Sciences category, Muhammad Talha Ökte and Umut Çakar from Cengizhan Anatolian High School, prepared their project under the supervision of their teacher Ömer Muştu. They received the first place with their project “Social Book Network”. 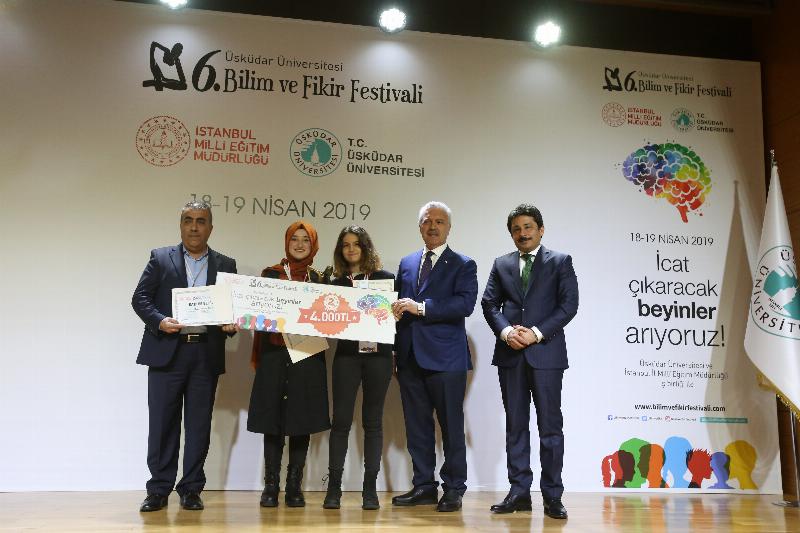 In Social Sciences category, Ece Sena Gökçegözoğlu and Nur Belemir Kumsar from Habire Yahşi Anatolian High School, received the second place under the guidance of their teacher Oktay Tekel with their project “Hydroponics and Aquaponic (Hydroponics) Agriculture in Underground”. 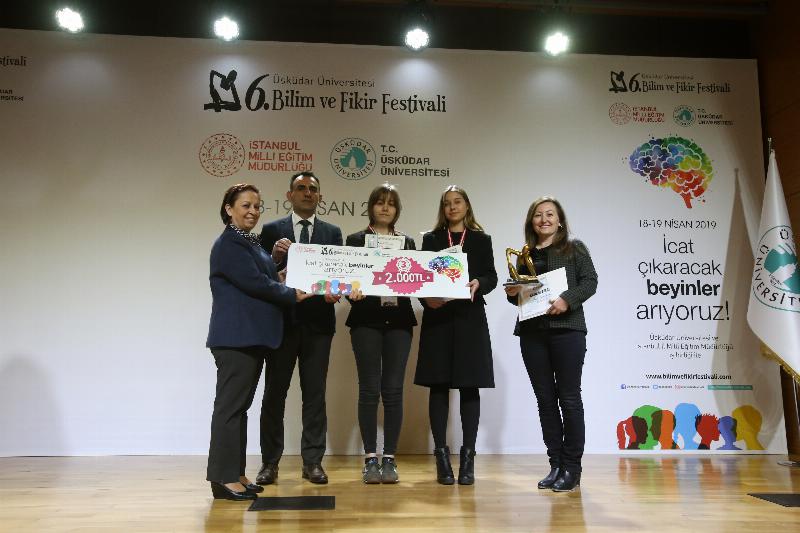 My Hero Stops at Nothing project became the third

In Social Sciences category, Selin Ebrar Özkan and Beyza Bayramçavuş from Private Küçükçekmece Halkalı Okyanus Anatolian High School became the third under the guidance of their teacher Duygu Yavuz with their project “My Hero Stops at Nothing”. 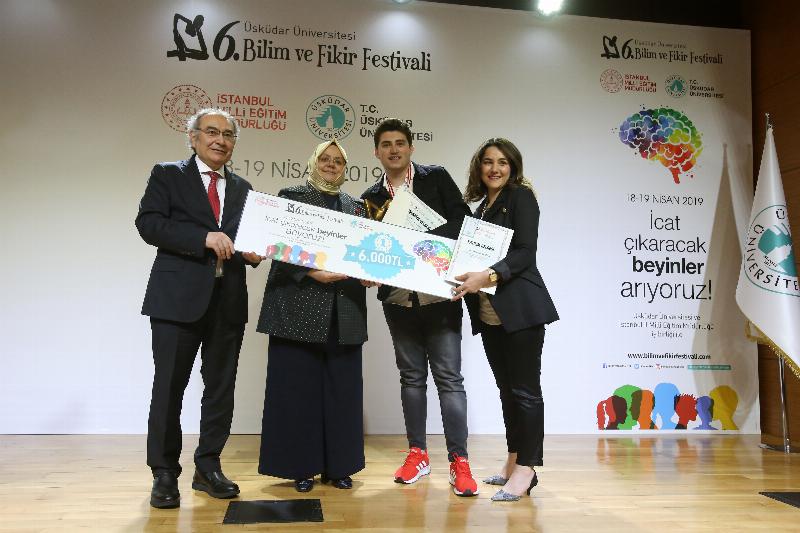 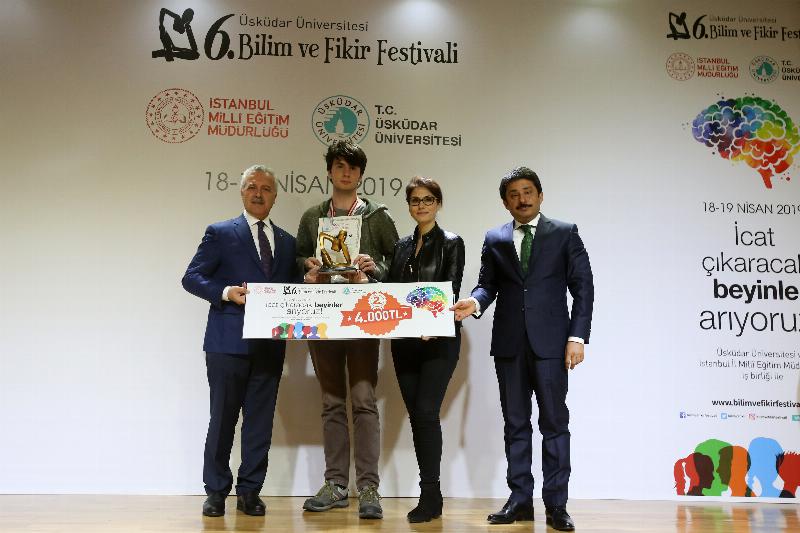 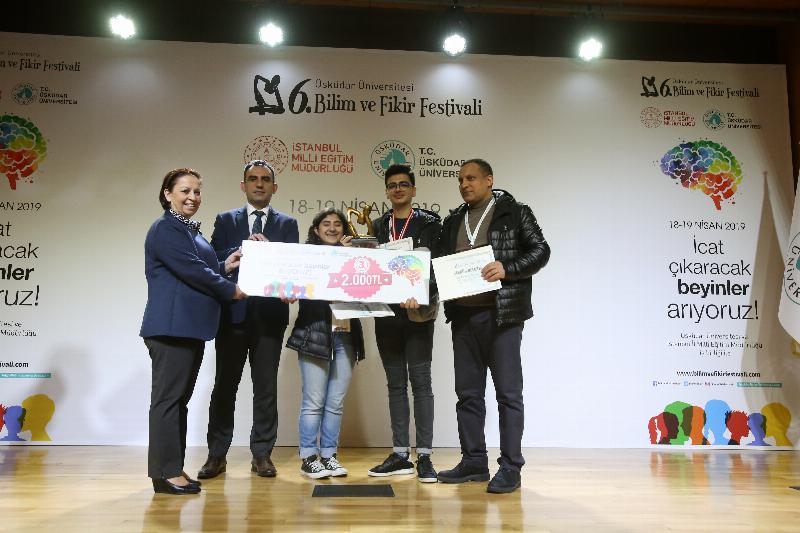 The project of Kaylin Nayra Özyerli and Hamdi Kerem Işık from the Sainte-Pulperie French High School that was prepared by their teacher Thami Bukhari became the third. Their project was titled “Use of Photopletismography Technology in Heart Rate Measurement and Consciousness Control of Drivers”. 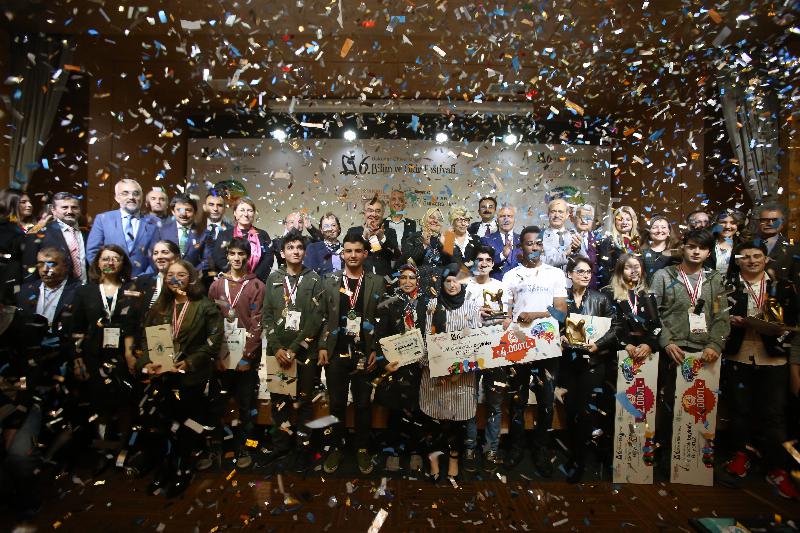 6 thousand TL prize was given to the first winners 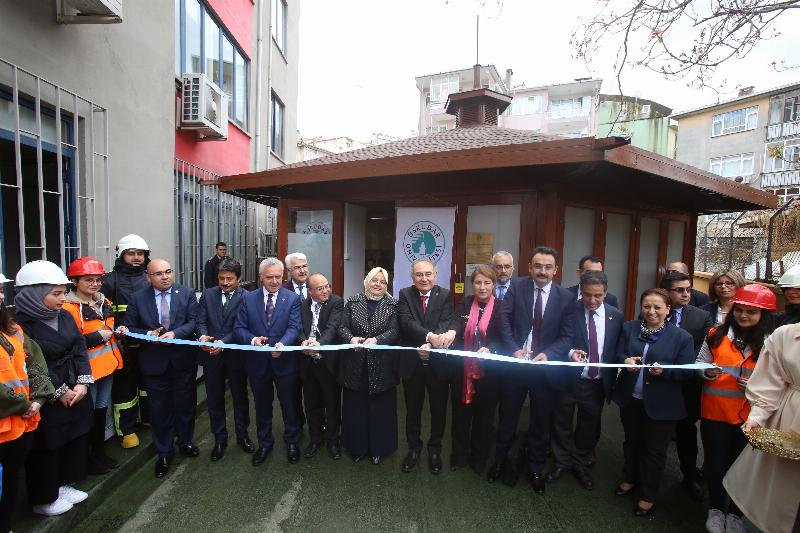 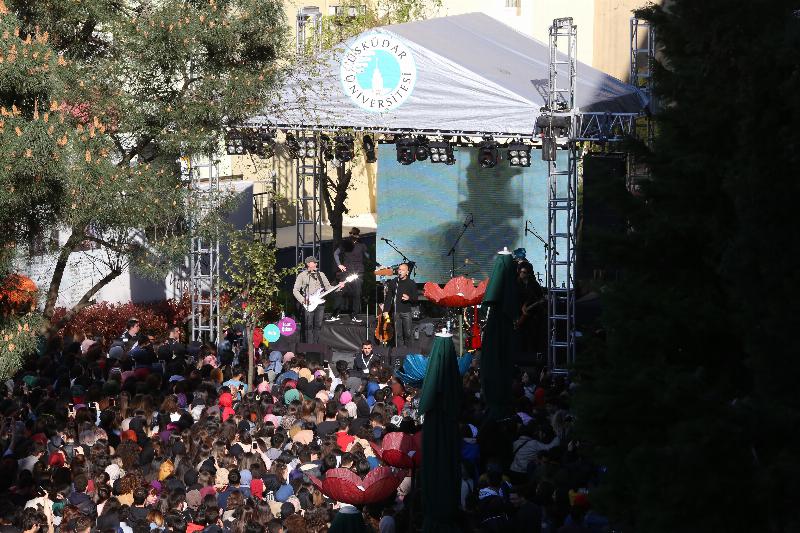 Students had a nice day due to the festival, and enjoyed the concert by Yüksek Sadakat. 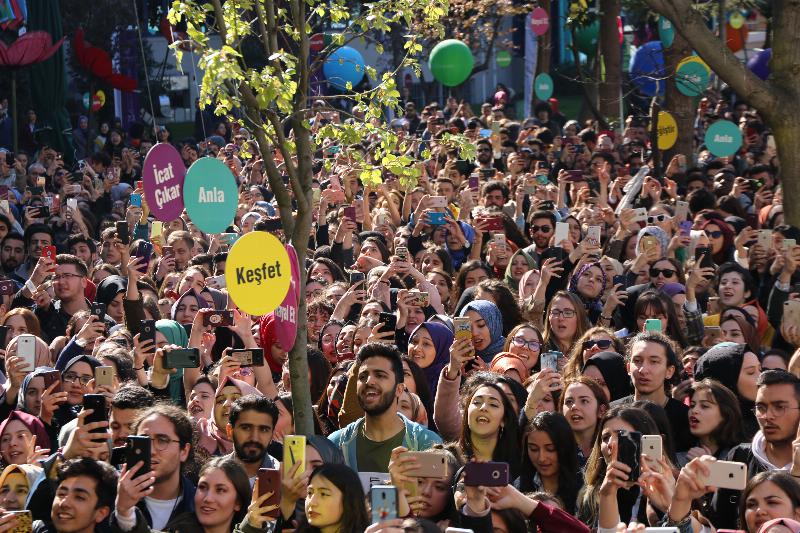