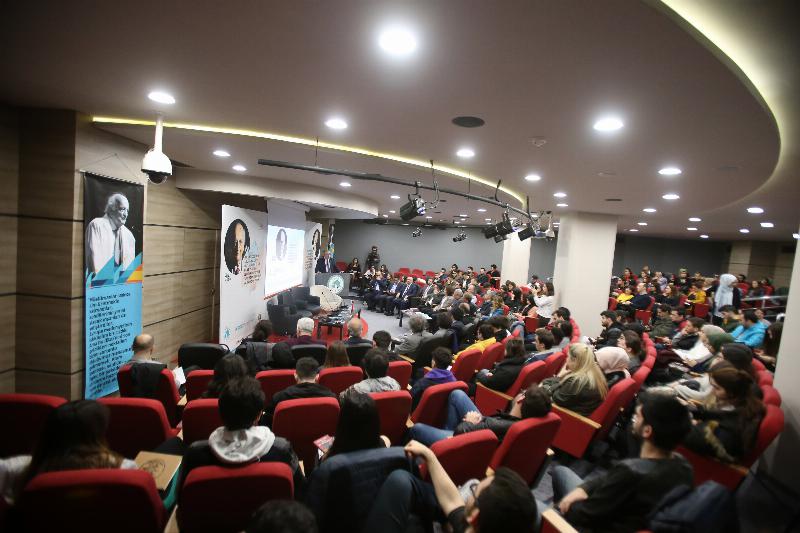 2019 is declared by the Presidency as “Fuat Sezgin Year” due to his important works and contributions to the introduction of the History of Islamic Science all over the world. Within the scope of this year’s declaration, “Fuat Sezgin and the Heritage of Islam against the Understanding of Science based in the West” Panel and Üsküdar University Fuat Sezgin Conference Hall inauguration ceremony was conducted at Üsküdar University. 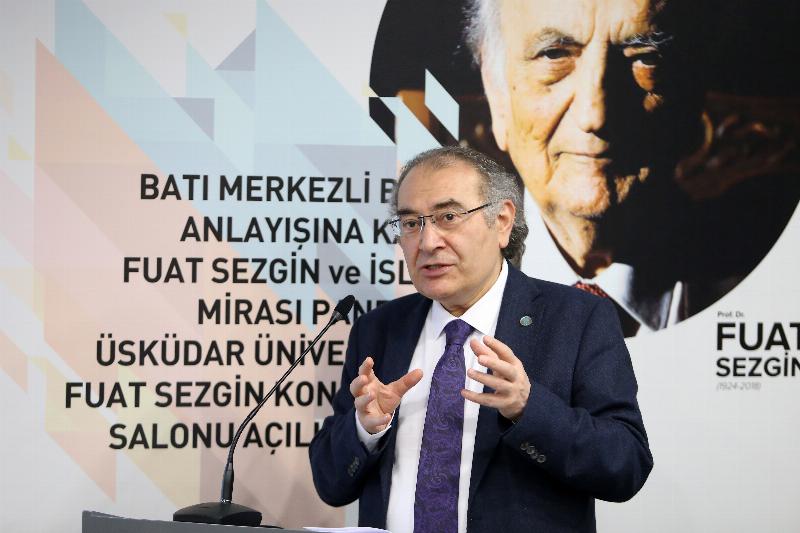 Üsküdar District Governor Murat Sefa Demiryürek also attended the panel and ceremony in which Prof. Nevzat Tarhan gave the opening speech. Prof. Tarhan stated that as a university they decided to keep his name alive way before 2019 was declared as Fuat Sezgin Year and before his death. Prof. Nevzat Tarhan continued as following;

Tarhan: “We could not mourn the end of Ottomans”

“We want to keep Prof. Fuat Sezgin’s name alive because he discovered the hidden treasure. Culture has two types; tangible and intangible. Tangible culture is roads, bridges, mosques and intangible culture is transferred. If intangible culture disappears, the identity of a society changes its memory. There is such a way of things in the world as well as popular culture. If we do not hold on to our own cultural identity, many cultures will disappear after 50 years, 100 years later. If our cultural identity disappears, if we are assimilated in some way, maybe our children and grandchildren will be children of other cultures. Therefore, Turkey must make modernization movement of its own culture and preserving their cultural identity. We still have not overcome the identity crisis in this direction. To overcome the identity crisis, one needs to make peace with the past. We could not mourn the end of Ottomans. Ottomans did their duty, but we are their children at the end. We carry the continuity and many features of Islamic history. But all of a sudden, it was a mistake to remove and throw all away. Wiping it out means destroying our own cultural identity. After a while, an identity that is considered to be an unworthy and impersonal culture that thinks other cultures to be above, as if we are a more worthless culture, emerges.

This is the cultural colonization movement. In the history of mankind, Britain and France found the colonial states. These countries have established a ministry of colonialism, but the Ottoman Empire never established such a ministry. Because there was no intention, there was no need to exploit. In order for us to stand up to our exploitation and imperialism, we had to protect our own values. One of the first thinkers and owners of this was Fuat Sezgin. In order to show that we exist by preserving our values, our identity, we had to make peace with the past, live our age, say goodbye to the Ottoman. For this, we had to see the pros and cons at the same time. There should have not been a mistake to establish an identity over anti-Ottomanism. Fuat Sezgin gave one of the first signs of turning from this wrong doing. When you look at the history of science, it is as if science has ended with Islam, and then it has started again in Europe. That's how we were taught. It was supposed to show scientifically that this was wrong. Fuat Sezgin has shown this through his references and manuscripts and used the scientific methodology.” 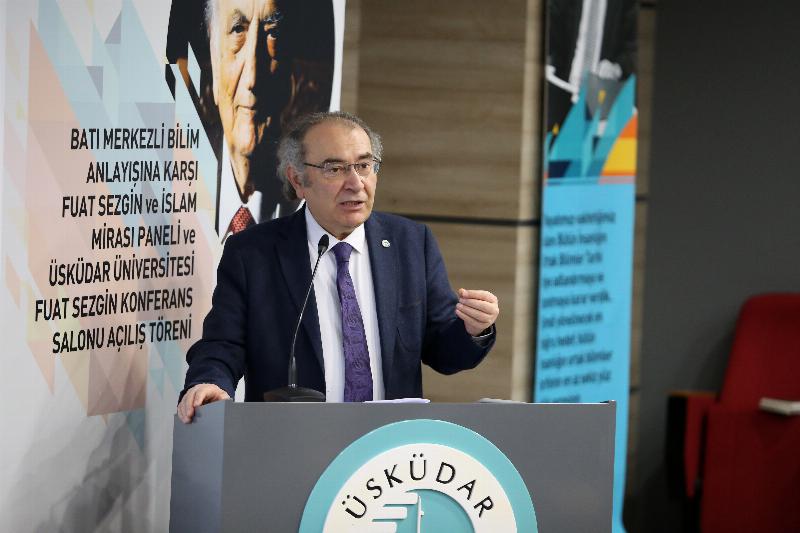 Prof. Nevzat Tarhan stated that Prof. Fuat Sezgin’s life should be taken as example as he was never offended even though he was hard done in 1960 revolution. “Do not get offended by wrong doings. Find one way does not work, find the alternative. Try to reach your goals. Prof. Sezgin became one of the peaks in the history of sciences and never gave up. Therefore, do not be afraid of making mistakes but be afraid of giving up.”

As Üsküdar University, an award was presented on behalf of Prof. Fuat Sezgin at the 4th Outstanding Humanitarian Awards this year and also Prof. Nevzat Tarhan stated that they would also organize an article competition and stated that it is essential for the West-based concept of science to investigate not only historians, but also about what should be done in their field. Prof. Tarhan said, “We should visit the museum in Gülhane. You can see compasses, maps, materials and scientific works used in Arab-Islam world. Science is formed of chains and links. There are missing links in science. We know that science began in the Renaissance, and Prof. Sezgin found these missing links. Starting from Aristotle led to the completion of many gaps. The other feature did not lose its national feelings, never gave up Turkish citizenship. I feel that Prof. Sezgin's soul is here, I wish him mercy from Allah.” 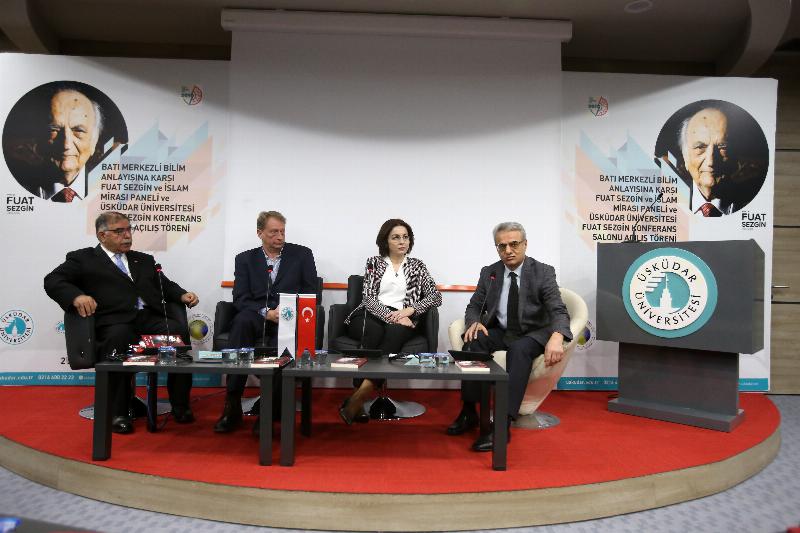 After the opening speech, “Fuat Sezgin and the Heritage of Islam against the Understanding of Science based in the West” Panel was actualized. The panel was moderated by Üsküdar University Faculty of Humanities and Social Sciences, Department of Political Science and International Relations Asst. Prof. Fehmi Ağca. The attendees were Fatih Sultan Mehmet Foundation University Asst. Prof. Detlev Quintern, Üsküdar University Department Head of History Asst. Prof. Halide Yılmaz Odabaşı and Former Governor Adnan Yılmaz. 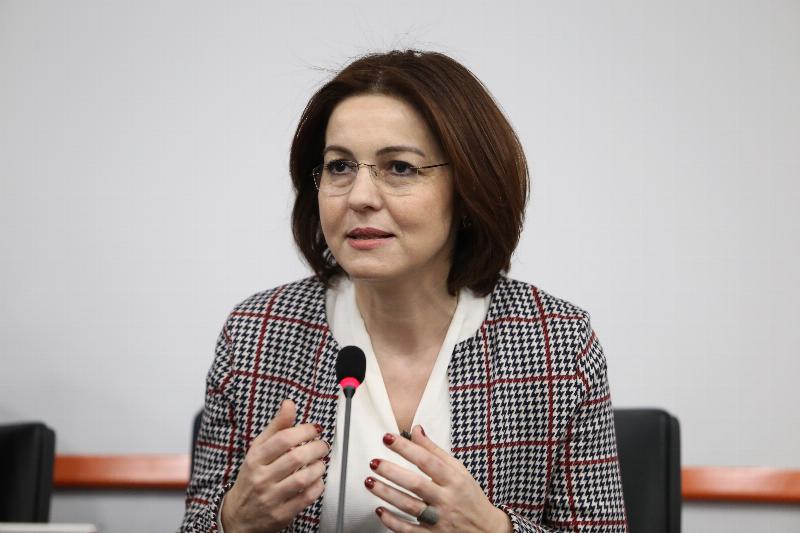 Asst. Prof. Hadiye Yılmaz Odabaşı said that the European-based perspective positions the East in the way it wants, and that Orientalism has a perspective centered on the East. She also emphasized the fact that Prof. Fuat Sezgin provided a third objective stand point that approached the history of science. Odabaşı continued, “Prof. Fuat Sezgin’s hallmark and greatness stands right here. As you are aware, Prof. Sezgin was not an Orientalist but he was far from Occidentalism. He gave an excellent answer to this; in one of his speeches he said, ‘The studies in the history of science are multilateral while working with friends in Germany, it is centered in European-oriented. We did not think it was right and decided that it should be called a common history of all humanity.’ This is far beyond just a conceptual determination. In fact, this is the basic codes of Fuat Sezgin's mindset world. This point precisely emphasizes that science is the common heritage of humanity, history and what we call civilization.” 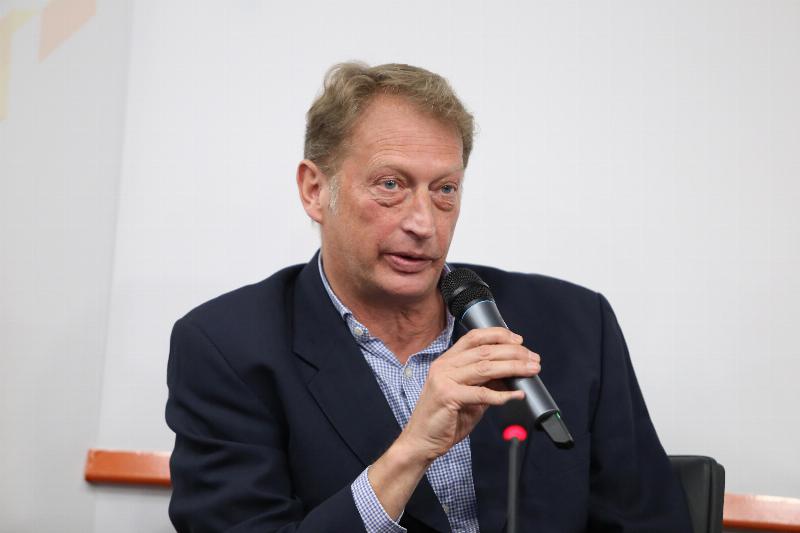 Asst. Prof. Detlev Quintern talked about the studies done for the history of Islamic science and the contributions of these studies to the history of science. He expressed the tolerance of Islam and said, “This tolerance contributed to the gathering of scientists from all religions in Baghdad and the development of science with their contribution.” Asst. Prof. Quintern, who met Prof. Fuat Sezgin at an exhibition in 1991, said that he benefited from Sezgin's studies in his own works. 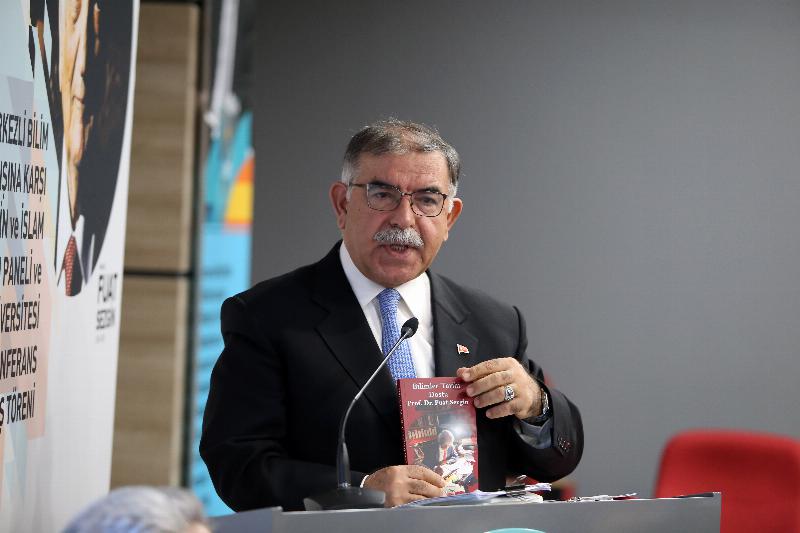 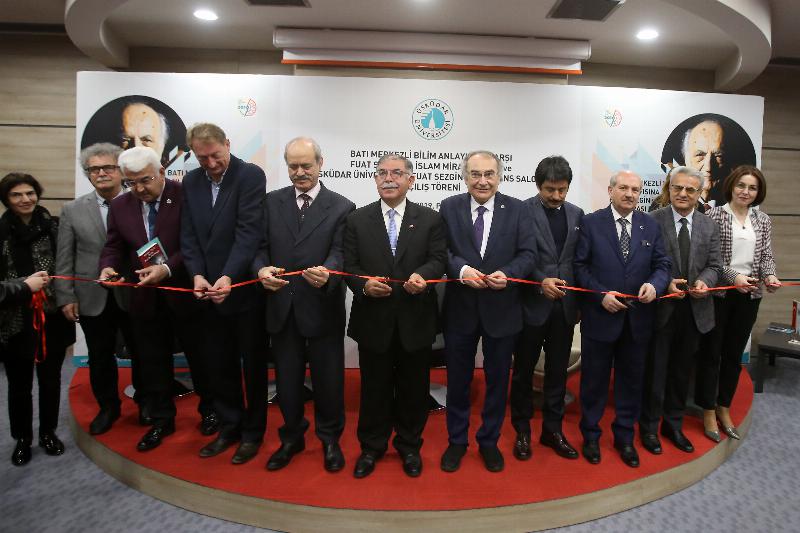 At the end of the panel which was broadcasted live at ÜU TV, participants took a souvenir photo. 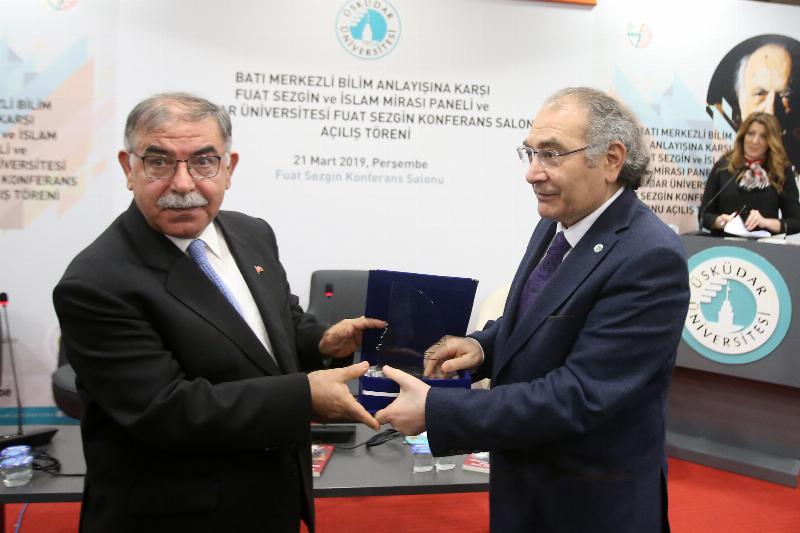 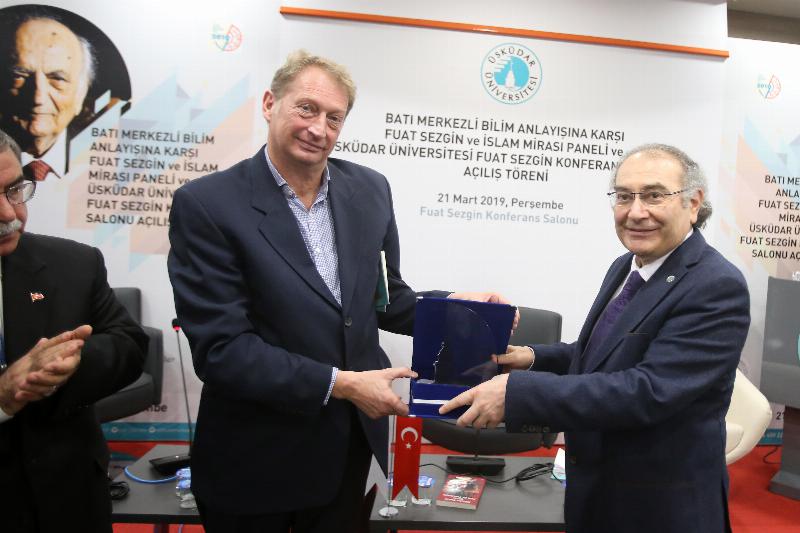 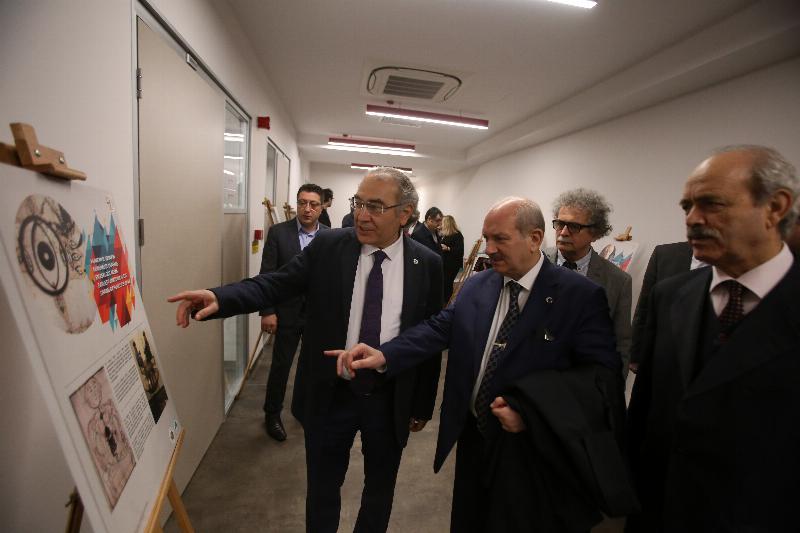