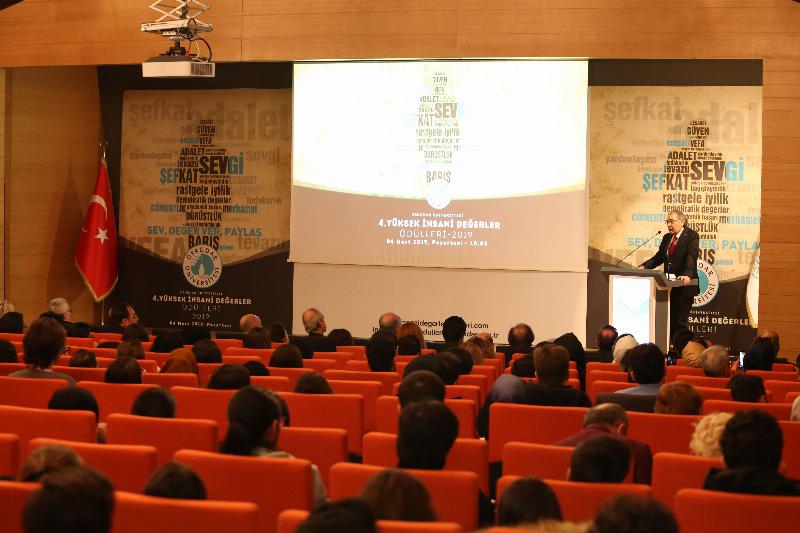 The Outstanding Humanitarian Awards ceremony, which is organized with the aim of promoting the social values, rewarding the behaviors, events and individuals who are examples of society and which encourage goodness, was held for the fourth time this year by Üsküdar University. This year, the deceased Prof. Fuat Sezgin’s wife Dr. Ursula Sezgin, Doğuş Group Board Chairman Ferit Şahenk, Darülaceze Chairman Hamza Cebeci and Tile Artist Mehmet Gürsoy were awarded by the university jury. Üsküdar University President Prof. Nevzat Tarhan stated that the ties that maintain a society together are common ideals, goals, historical and cultural values. He continued as, “If they have common values in these three areas, then the society can be one and together. These values are invisible bonds.” 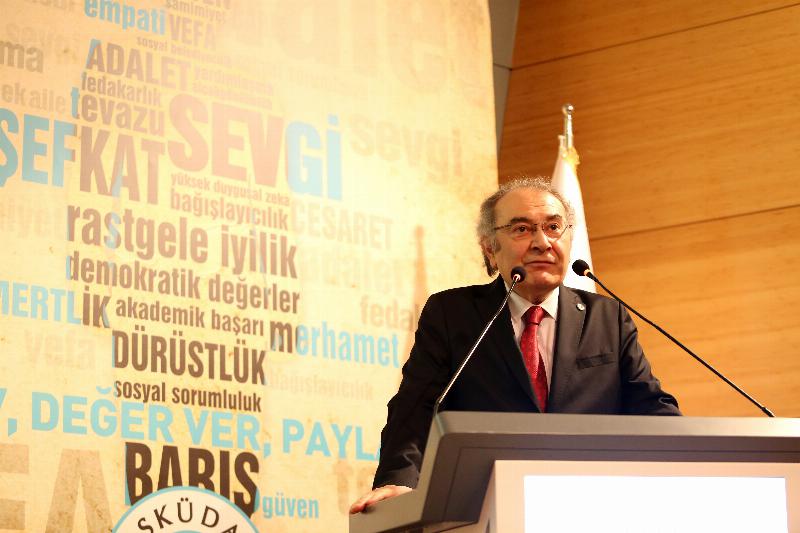 Üsküdar University President Prof. Nevzat Tarhan, mentioned in his opening speech that there is a serious change and transformation within the society and humanity as well as a serious civilization crisis especially happening in Western society. Prof. Nevzat Tarhan stated that the study of loneliness, conducted with 55 thousand people at Manchester University, reveals that loneliness issue is greatly observed in large sections of the society. He said, “As you are aware, Ministry of Loneliness is founded in England. 8.5 million people live alone and there are serious suicide cases. Measures are being taken regarding this issue.
The study conducted by the University of Manchester aimed to reveal the loneliness of the elderly, but it also revealed a strange loneliness among young people aged between 16-24. There are lonely teenagers in the crowd. These young people are in the crowd but they are in social and psychological isolation because of digital dependence. Self-care skills are lacking and they do not eat warm, homemade food. They are only interested in the digital world. Several features have been identified in this generation; weakness in religious, national and ideological affiliation. They give more importance to nature. They do not care about family values and they are against the marriage institution. This is not only the case in our society, but also in the world.”

Three things that sustain the civilization are weakened

Prof. Nevzat Tarhan expressed that three reasons cause the current situation and said that the weakening of three things that have sustained a civilization, has led to these consequences. Prof. Tarhan said, “The first is the weakening of family and family ties. Because the primary school of values is home and family. Divorce rate is over 50%. Even in the first 5 years, the divorce rate in Turkey is 39% according to 2017 TÜİK data. This rate is high in many parts of the world. Humanity is going through a crisis in civilization. There are three important reasons on why this crisis occurred. The first is the social anomaly, the disappearance of social norms. There is imperceptibility in the area identified as the common communication area. There is a confusion and uncertainty about what is good or right under the name of freedom.
People have weakened the values that hold us together. Another reason that humanity is in a serious Secularism. They don't care about inner conscience. Self-centered people only live for themselves. The weakening of higher emotions and changing the concepts of the meaning of life have an important role. Another factor in the depreciation of values is confusing individualism with self-centering. Individualization is a good move for the emergence of people's abilities, but individualization does not mean that human social ties should be weakened. Therefore, an individual is not just a person who lives for the self. When a person should have dreams for the society and humanity, a human type that only dreams for itself emerged. When the individual deteriorates, the society begins to deteriorate.”

Prof. Nevzat Tarhan stated that the 24 values that are awarded by the university, are underestimated in the society. He continued, “Values are depreciated. As a result, the elderly, weak, patients and disabled suffer the most. After a while, the problem of loneliness emerges in people who ignore the disadvantaged individuals. The level of development of a society is not about being rich, but about the value it gives to disadvantaged people.” 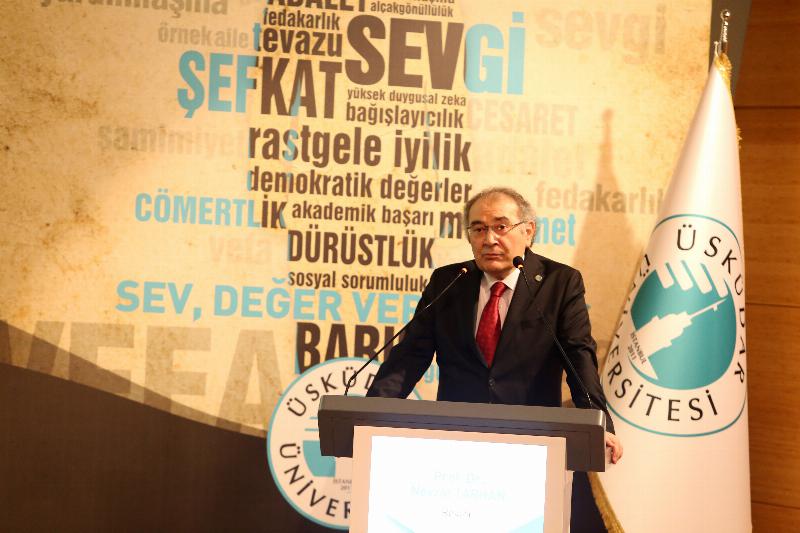 “The value of values are only known now by antique dealers”

Prof. Nevzat Tarhan added that the value of something can only be understood by the master of that work and he told a story between father and son:
“A boy who questions life asks his father about the meaning of life. He asks why people are precious. And the father gives to his son the precious stone he owns. He tells him to take this to a tradesman first and show only two fingers with his hand but not to sell it. The child goes to a shop and shows two fingers that his father wants him to do. The tradesman says he'll pay $ 2. Boy goes to his dad and tells him that the tradesman offers 2 dollars. Then father asks his boy to go to a museum and tells him to say “Do the same sign but do not sell the stone.” The boy did the same. The employer at the museum offers $ 200. The boy goes to his dad and tells him that. This time the father sends his child to an antique shop. When the antique dealer sees the antique stone, says that it is very valuable and wants to offer 200 thousand dollars.

After that the father tells his son; ‘Look son. Stone is the same stone. Locations is what makes the stone valuable. Those who know their value and worth can appreciate it. Therefore, it is necessary to live with the people who understand the truth.’ And he's teaching his kid that. The value is the same and today you can find the value of these 24 golden values in the antique market. The bazaars of modern life devalued the values at the moment. Therefore, we need to rebuild the values. People and institutions that contribute to these values need to form a common language. This is what we aim.”

Common values are the hidden link that holds society together

Prof. Tarhan indicated that the Humanitarian Awards are presented to the individuals and corporate to uncover their contributions to the society. While Prof. Tarhan mentioned that there are about 19 thousand students and a thousand employees, he said, “All these individuals need to create a common language. It is the common ideal and goals that sustain society. Solid society cannot be maintained with self-centered people.

There will be mutual ideals, historical values and cultural values. If the society has common values in these three areas, then they can be one and together. These values are invisible bonds. When these bonds are resolved, they dissolve spontaneously. For this reason, we will continue our studies in order to achieve these values and set good examples to young people.” 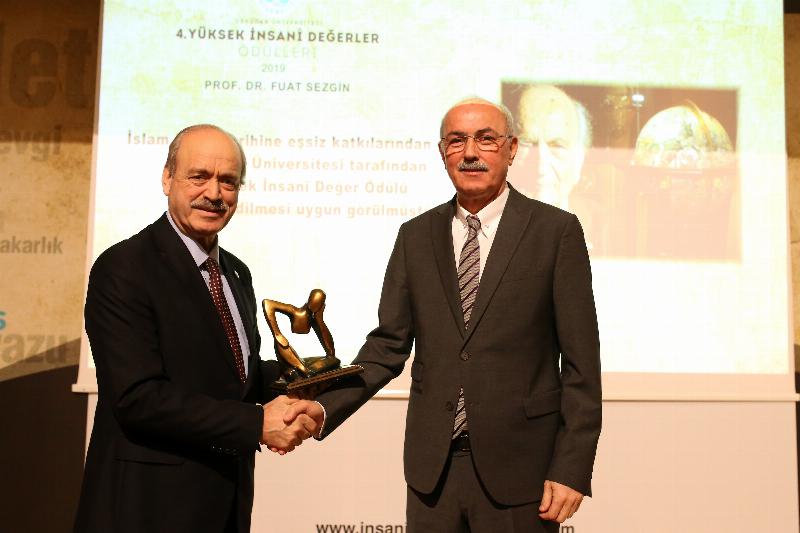 The first award was presented to the late scientist Prof. Fuat Sezgin, who died on June 30, 2018 due to his contributions to the History of Islamic Science. Prof. Fuat Sezgin Research Foundation for the History of Science in Islam President Mecit Çetinkaya received the award on his behalf. Üsküdar University Vice President Prof. Mehmet Zelka presented the award. Çetinkaya said that Prof. Fuat Sezgin, who lived in Germany for 60 years, never thought of becoming German citizen and had a very modest life. He expressed that Prof. Fuat Sezgin did not avoid any sort of sacrifice to reveal the true History of Islamic Science. Çetinkaya said; “My teacher advised young people the following: Muslims have a great sense of inferiority in the face of the Europeans because they do not know the enormous places in the history of science. My purpose is to show and teach them the great places of their ancestors in the history of science.” Mecit Çetinkaya conveyed the greetings of Dr. Ursula Sezgin who could not attend the ceremony due to health problems and thanked Üsküdar University for the award. 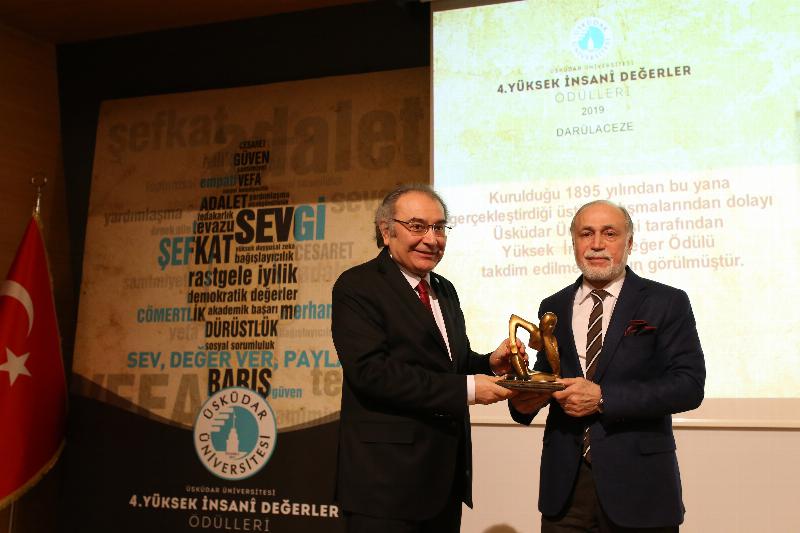 The second award was presented to the Darülaceze President for its outstanding work since 1895. Üsküdar University President Prof. Nevzat Tarhan presented the award to Darülaceze President Hamza Cebeci. Hamza Cebeci thanked Üsküdar University for the award. He said, “We are a nation who looks after the elderly, gives hand to other people in the world and not only in the country and who believes in worship. We have such history.” 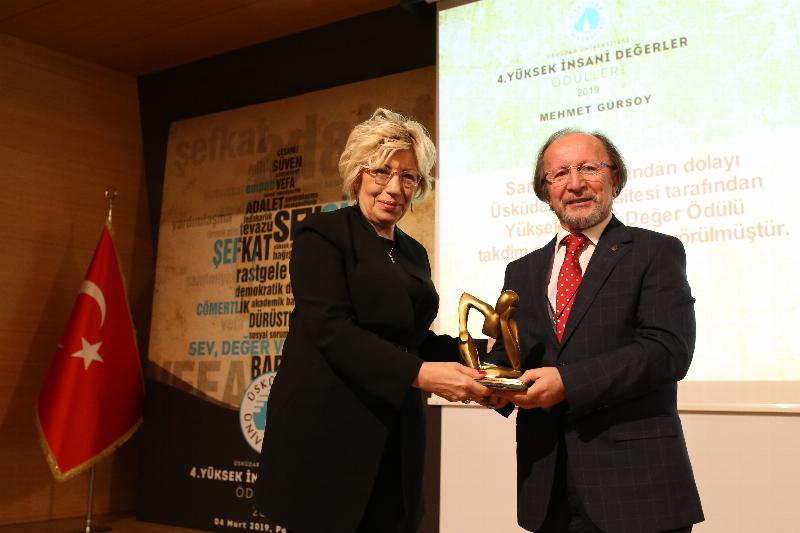 Tile artist Mehmet Gürsoy awarded due to “contribution to art” 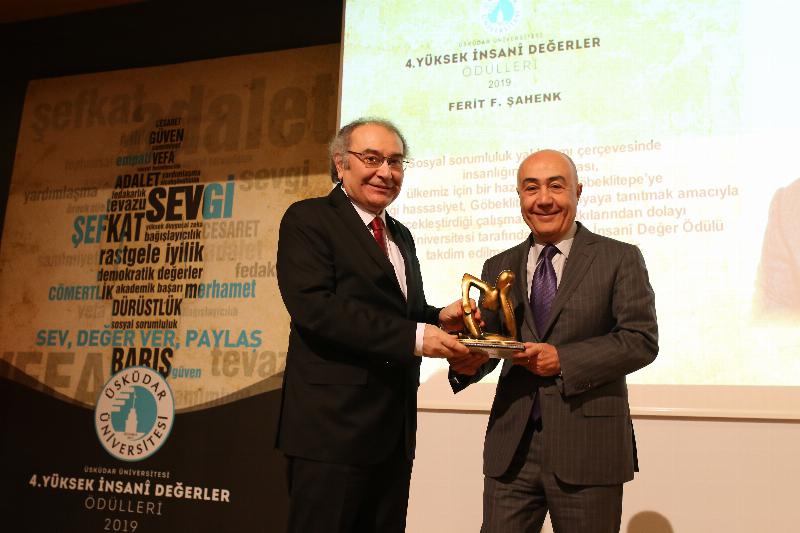 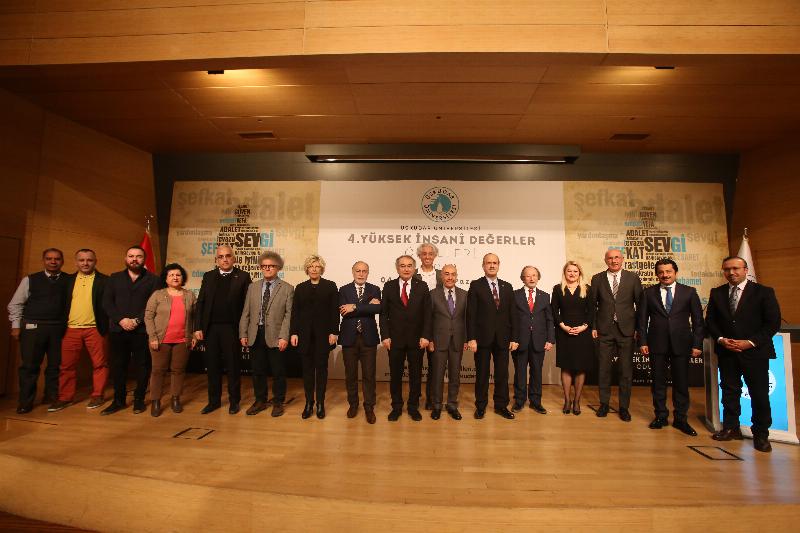 Üsküdar University brings the “Outstanding Humanitarian Values Awards” to the society in the 24 Golden Values categories. The fourth award ceremony was presented this year once again for the 24 golden values such as “Justice, Compassion and Honesty, Transparency, Courage, Empathy and Responsibility, Confidence and Loyalty, Humility, Charity, Greetings, Sincerity, Forgiveness, Generosity, Sacrifice, Gratitude, Pluralism, Participation, Liberation, Accountability, Conciliation, Innovation.” Trees are planted at Şile” İyilik Forest” for the individuals and institutions awarded at Üsküdar University 4. Outstanding Humanitarian Values Awards. In addition, student scholarships will be given on behalf of the individuals and institutions in the 2019-2020 academic year.