Dr. Babak Kateb has given the title of Honorary PhD

Üsküdar University hosts an important event. Middle East & Balkans Brain Initiative Summit held by Üsküdar University and Society for Brain Mapping and Therapeutics (SBMT) will last 3 days. Dr. Babak Kateb was given the title of “Honorary PhD” by Üsküdar University due to his valuable contributions to neuroscience studies on both local and global scale and his great devotement shown in treatments of brain diseases in the opening ceremony of the summit. 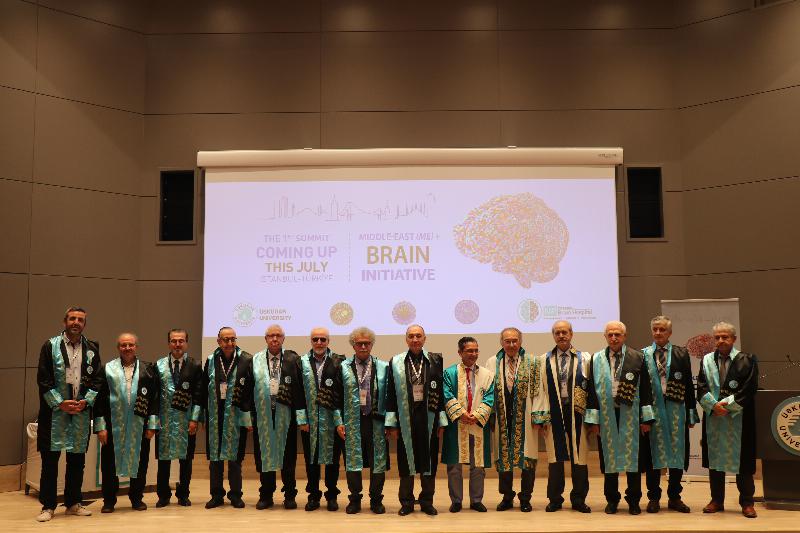 Üsküdar University President Prof. Nevzat Tarhan expressed that digital control system will be popularized and accepted globally, and there is a way for this in metaverse.  Prof. Tarhan also indicated that neuroscience policies in the world will be discussed on N20 summit that will be held this year. Prof. Tarhan said: “Brain Summit is a work of innovation and entrepreneurship in neuroscience. We made a beginning by setting the first example in Türkiye.”. 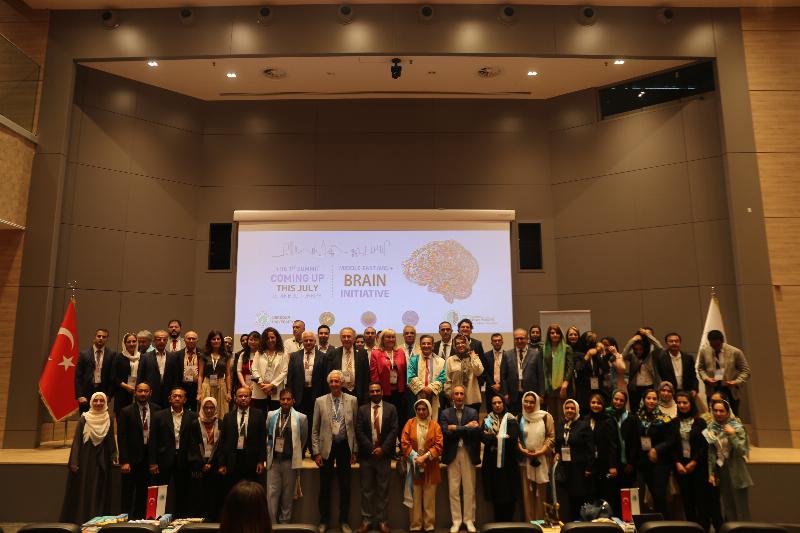 Over 50 scientists from our country, Iran and Egypt will discuss the latest developments on the area of brain diseases and brain mapping in the congress where world-wide known names who carry out works on a global scale, will attend.

It is aimed to create a local consortium in Balkans and Middle East that will examine neurological disorders on brain, spine and mental health in the Middle East & Balkans Brain Initiative Summit that will continue for 3 days held in Üsküdar University NP Health Campus. Distinguished scientists from Türkiye and various countries of the world attend with their presentation to the summit where policies on neurosurgery, neurology, neuroradiology, psychiatry, neurotechnology and neuroengineering will be discussed. 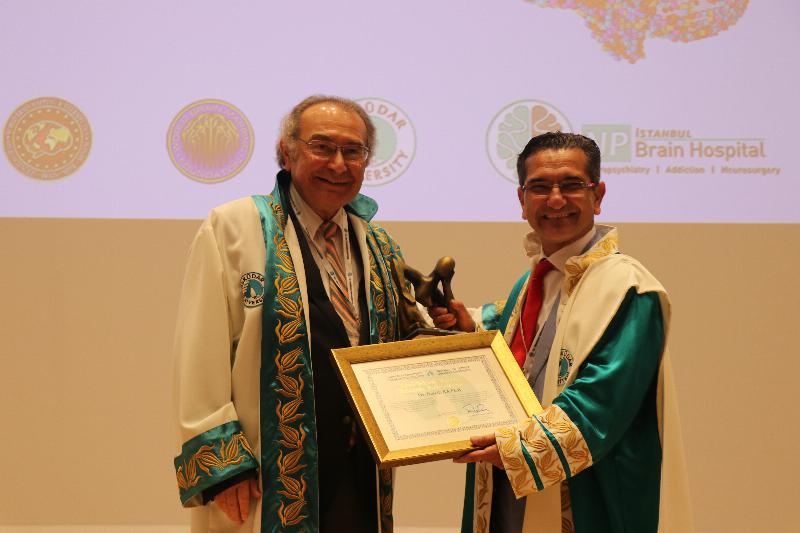 Dr. Babak Kateb was presented with the title of Honorary PhD

In the opening ceremony of the summit, “Honorary PhD Presentment Ceremony” was held by Üsküdar University for Founder of Society for Brain Mapping and Therapeutics (SBMT) Dr. Babak Kateb due to his valuable contributions to neuroscience studies on both local and global scale and his great devotement shown in treatments of brain diseases. 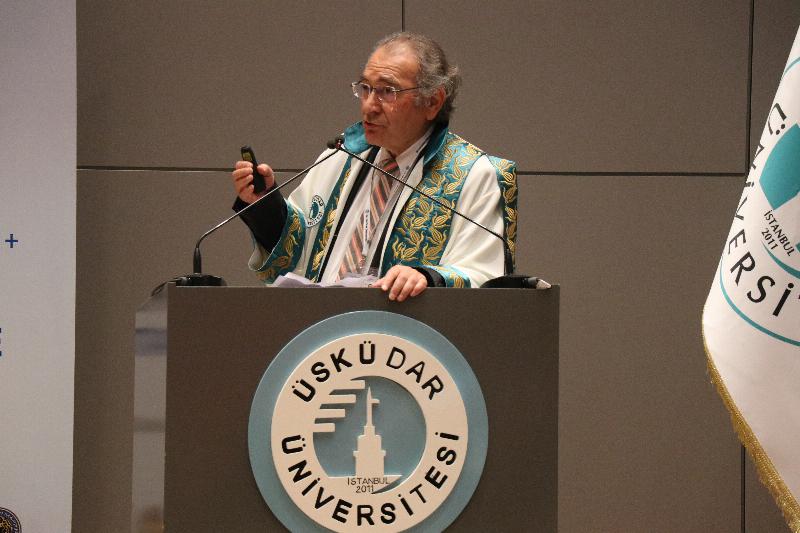 It has been a year since Üsküdar University President and Supreme Council of Management President, Psychiatrist Prof. Nevzat Tarhan has been the Chairperson of the MeBrain + Initiative. Tarhan said that this initiative called as brain initiative was firstly brought forward by Obama in 2013.

Prof. Nevzat Tarhan said: “In that time, a budget worth 100 million USD dollars was reserved. In 2015, a speaker from NASA who attended the congress that we attended with SBMT (Society for Brain Mapping & Therapeutics) team that also organized today’s summit, said over 2000 students within NASA were studying neuroscience. In Davos 2018, the first results are announced. It is said that minds can be controlled and artificial intelligence will be the god-king. Historians like Harari rebuked this rightfully and they stated ‘The world is heading to a digital dictatorship, we are the last free generation.’”.

Prof. Nevzat Tarhan: “Neuroscience policies will be discussed in the 2022 N20 Summit”

“It’s a method in realizing this by launching Metaverse. It will be actually used in daily practices under ELG. Brain Initiative is very essential for this. In world, it was continuing in parallel with the G20. The G20 was held in Italy in last year. This year, it will be held in Indonesia. We will hold the N20 in parallel with that. Üsküdar University will attend as a university from Türkiye. In that meeting, neuroscience policies in the world will be discussed. Digital artificial intelligence, neuroscience and genetics cooperation will be brought out. We held the first local meeting of the SBMT foundation.  We try to express infrastructures of the university and the things behind our claim of brain base.  We informed on which treatment methods are used as Türkiye’s first and Europe’s second brain hospital. About 50 speakers will attend the program that will continue for 2 days.”. 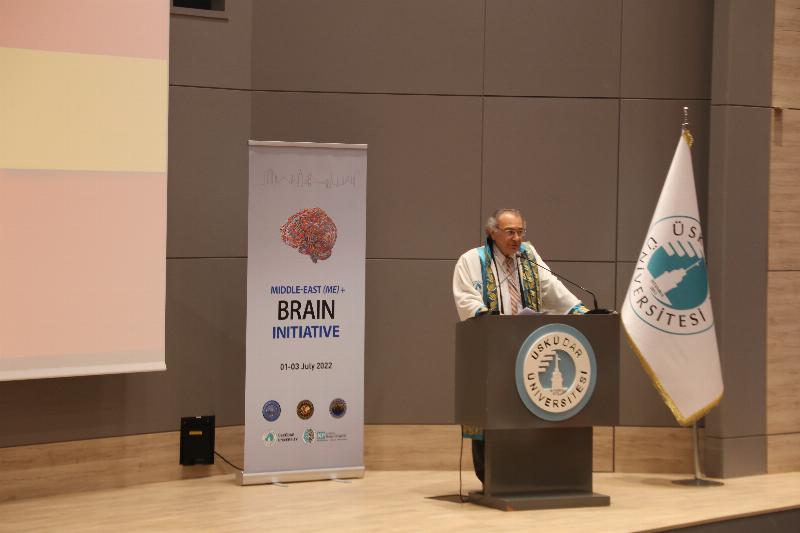 Prof. Nevzat Tarhan: “The beginning of the summit was made in Türkiye.”

Prof. Nevzat Tarhan said that they aim to conduct projects together within a local cooperation with shareholder scientists in the Middle- East Brain Initiative program due to its more specialized area. In addition, Tarhan said: “There are recombinant protein producing techniques in new medication production in the genetic laboratories. When this is produced, it is turning towards using brain signals in treatments. It is aimed to present these studies by realizing it to the scientific course. We showed the infrastructure of the university on this opportunity provided by this program.  Team work is really important in international studies. There are many participants from Egypt and Iran. It is quite pleasing. If it goes as planned, it is like to hold this program in Egypt, as well. Brain Initiative is a work of innovation and entrepreneurship in neuroscience. We made a beginning by setting the first example in Türkiye.”.

Prof. Nevzat Tarhan: “The Success of Üsküdar University is registered.”

Prof. Nevzat Tarhan informed on research and application areas that are focus of Üsküdar University and its application partner NPISTANBUL Brain Hospital. Tarhan said that Üsküdar University represented successfully our country globally by ranking in evaluations on different areas such as research, innovation, social effect, education quality, and healthy life-wellbeing by worldwide institutions such as Times Higher Education (THE), Scimago Rankings.  Prof. Tarhan said: “The success of Üsküdar University in research and education activities was registered officially by an international ranking institution that is Times Higher Education (THE). The studies that are carried out, are deemed worthy to the ‘4-quality education’ label by THE and R&D studies that are carried out in the health sciences are strengthened by 2-good health & wellbeing’ label.”. 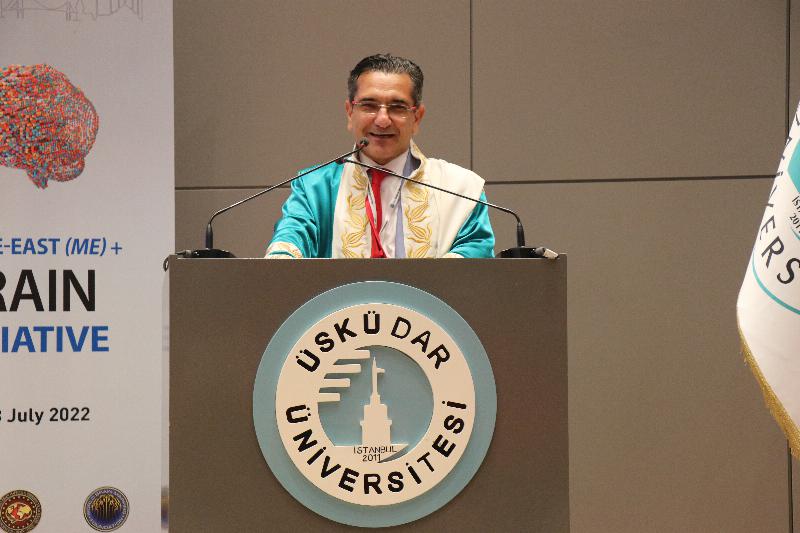 Dr. Babak Kateb: “All good things must be shared.”

Dr. Babak Kateb said “I am so honored for this precious award. Thank you so much.”. Dr. Babak also said: “I believe that all the good things must be shared. First one of these is wealth, the second one is information and third one is network and another one is affection and health. To discover a new information will find its meaning when you share it with others.”. 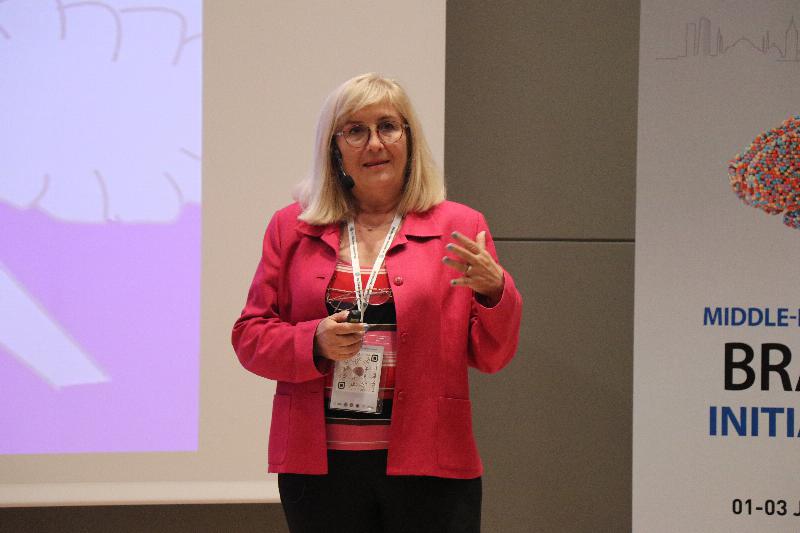 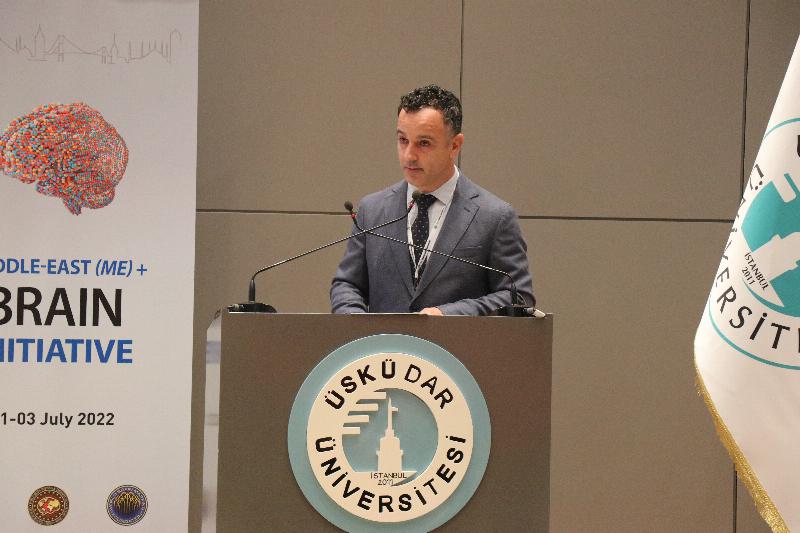 Scientist from Iran Brain Initiative attended with their presentations

Scientist from Iran Brain Initiative attended with their presentations in the summit where Christopher Glaser made an opening speech. Those who presented their presentation in the panel where Harvard Mental Health Alumni and Middle East Ambassador Mohammad Nami were chairperson, are as follows: Jalal Jalal Shokouhi from Iran Radiology Foundation with “Neurotrauma Imaging”, Maryam Noroozian from Tehran University of Medical Sciences with “Dementia and Cognitive Disorders in Middle East: Threats and Solutions”, Sajad Sahab Negah from Mashhad University Medical Sciences with “Exosomes for Stem Cells during a Traumatic Brain Damage”,  CEO and Founder of IQBMI LLC Mojtaba Barzega with “The Role of Advanced Neuroimaging Techniques in Brain Mapping”. 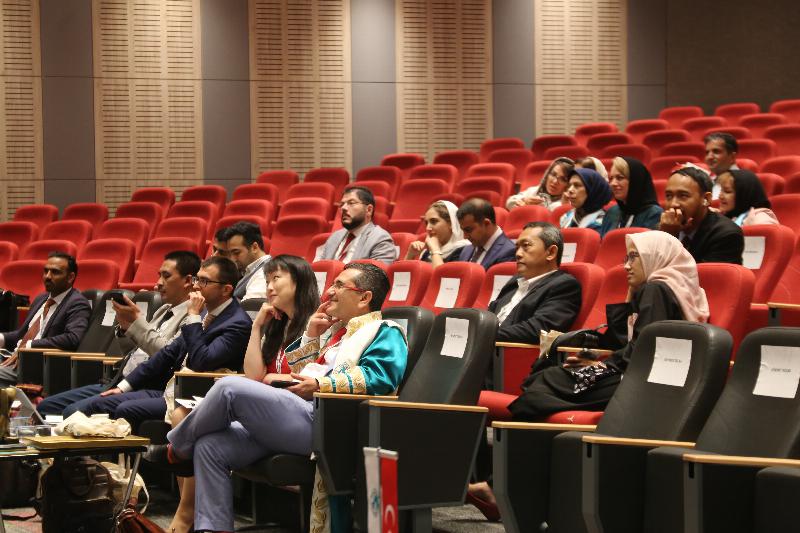 Under the moderation of Mohamed Fahmy Zeid, scientist from Egypt Brain Initiative also contribute greatly to the summit.  Those who presented their presentation in the summit where Dr. Babak Kateb was invited to make a speech, are as follows: Mohamed Ahmed Fahmy Zeid from Alexandaria University with “A New Aspiration, Irrigation and Dissection Microsurgery Bipolar Coagulation Forceps”, Sahar Elkaradawy with “Handicaps of Suitable Pain Treatment”,  Ebtesam Abdalla with “Solving Molecular Basis of Neurodevelopmental Disorders in  Egypt”, Jaidaa Mekky with “To Establish a Sleep Disorder Department: Difficulties and Requirements” and Nasser El-Ghandour from Cairo University with “ E-Learning and E-Education for all Continent Countries from Egypt”.

In the first day of the summit, a panel was held, which Rialda Kovacevic was invited as a speaker. In the panel that was held under the moderation of Dr. Babak Kateb, speakers attended from the USA, England, Italy and Indonesia. Those who attended the summit also visit NPISTANBUL Brain Hospital. 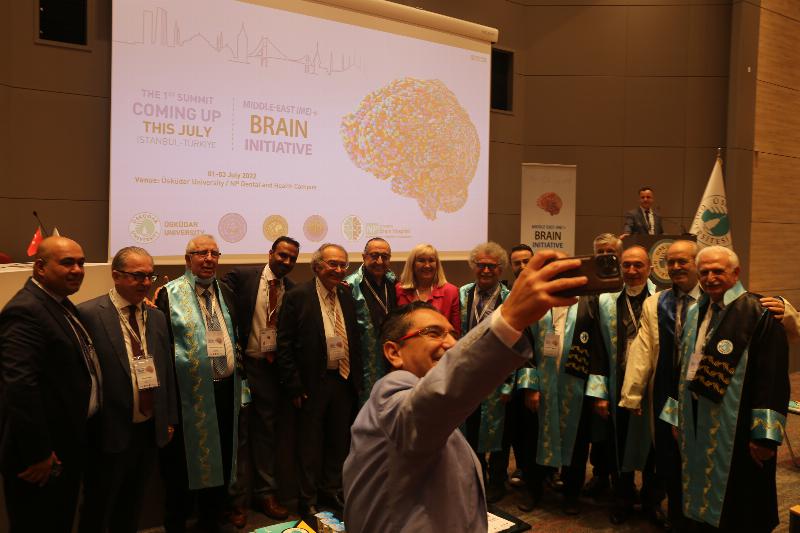 In the second and third day of the summit, panels will be organized under the titles of neurotechnology, neuropsychiatry, neuro-oncology, epilepsy and connectome, neurotrauma (Brain and Spine Damage).