Prof. Nevzat Tarhan: “Those in advance ages become a victim the most...”

A certificate of appreciation was presented to the students and project coordinators who successfully implemented the “Your Call is Enough (Araman Yeter)” project. Demiryürek said: "I hope this project will turn into a ministry project" in the ceremony that Üsküdar District Governor Murat Sefa Demiryürek who is one of the project coordinators, attended. Highlighting to the importance of investing in the elderly and touching their souls and lives, Prof. Nevzat Tarhan said that the victims are mostly elderly people in such era where loneliness increased due to the effect of the pandemic. 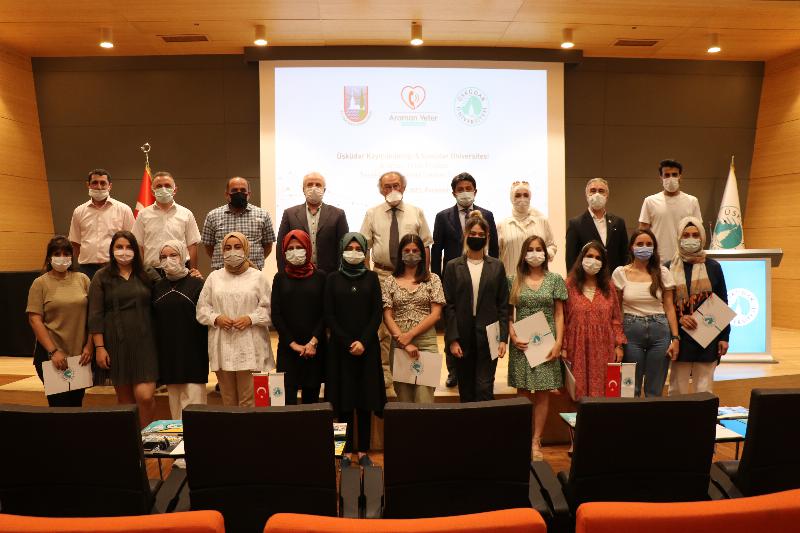 In cooperation with Üsküdar University and Üsküdar District Governorship, the "Your Call is Enough" project was implemented. A ceremony of presenting the certificates of appreciation of the project which provided psychosocial support to 500 elderly individuals and 25 young volunteers, was held. Asst. Ayhan Özşahin made his opening remark in the ceremony held at Üsküdar University Nermin Tarhan Conference Hall. 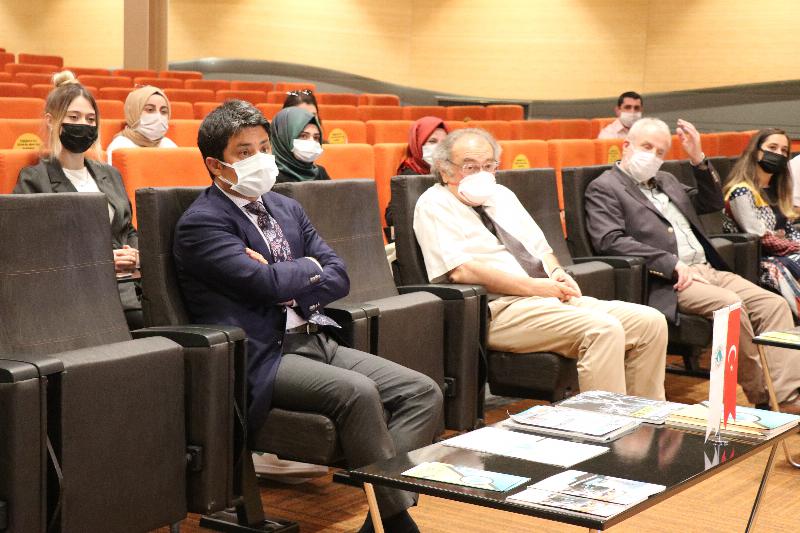 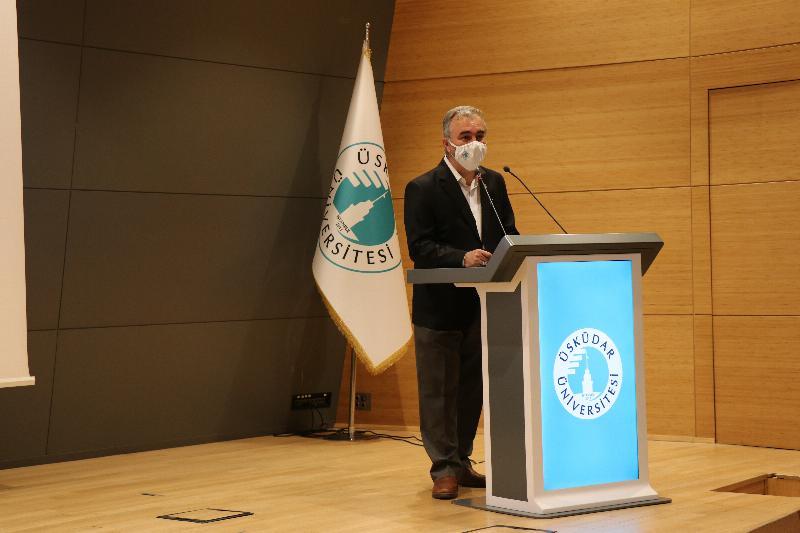 Asst. Prof.  Ayhan Özşahin: “My mother and father used to tell me ‘your call is enough’…”

Mentioning the beginning of the project, Üsküdar University Faculty of Medicine Head of the Family Medicine Department, Project Coordinator Asst. Prof. Ayhan Özşahin said: “Our professor Tarhan told us ‘Make a project so that we can always create benefits for us’ and our professor encouraged us. So, we presented our project to the esteemed District Governor of Üsküdar, Murat Sefa Demiryürek. With the foresight of a statesman who is also in the field, he said, let's do this first thing and therefore, we acted with zero financial support but with our own resources, our own spirit and our own energy, and the support of our students. We began to search for selected individuals over the age of 65 in the Üsküdar District Governorship region. I would like to thank the students of the social work department here. I was very happy with the dedication, smiling face and positive, sympathetic youth energies. Our professor Ismail Barış who raise our students, definitely has a lot of labor, thank you professor. We wanted to add a youth story to this youth excitement. The idea for this project comes from my deceased father and mother. When I called them to ask 'how are you, are you okay?’ or when I asked ‘Do you need anything?” they said ‘We have everything thankfully, your call is enough’ because I guess I did not call them very often. On this occasion, I have paid off my debt to them a little bit. Now, we have a nice service model. It has to survive, we are delivering it to the hands where it belongs, on this occasion.”. 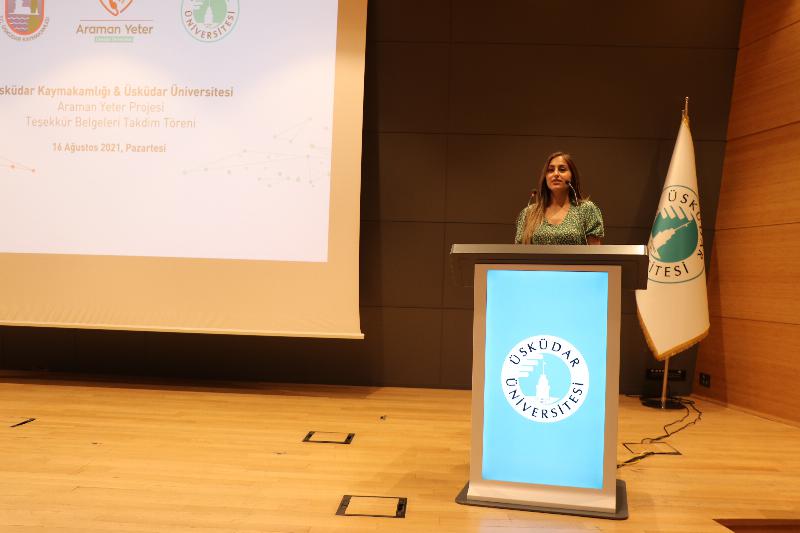 Hilal Yıldırım, a student of Üsküdar University Department of Social Work, who spoke on behalf of the project management team said: “I was a volunteer inyou’re your Call is Enough project. The people we were looking for, were people over the age 65 and living alone. This situation made us think that a person wants be asked by someone even if they do not know that person. The speech that impressed me was that they said we were no different than their own children. They saw us not as workers but as their grandchildren. They were speaking in such candor. We had both funny and sad memories.  Some of them said ‘Can't you call us again, I already live alone.’. I hope such voluntary projects continue and we reach more people. Thank you." 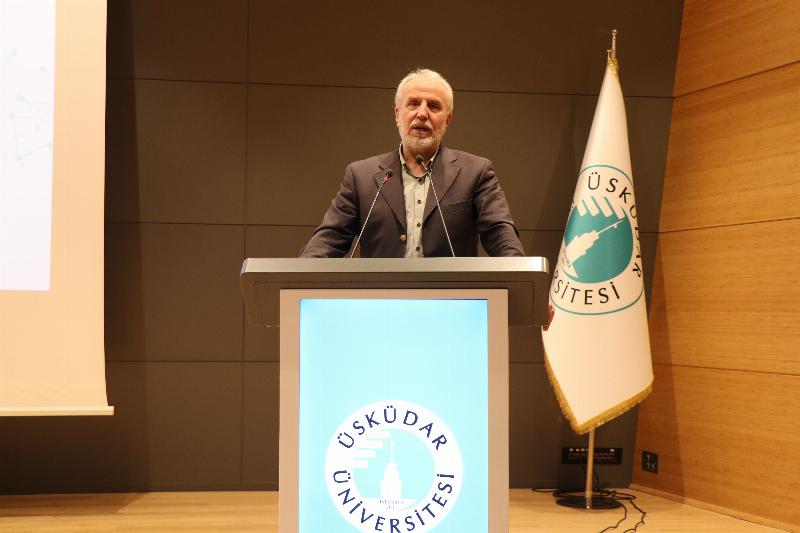 Head of the Social Work Department within Üsküdar University Faculty of Health Sciences and project consultant Assoc. Prof. İsmail Barış said: “Social work is a profession of humanity. This profession of humanity has four indispensable pillars. Since they are essentially a public servant, they have well-trained professional staff on one pillar, and I can say from here that a good social worker is raised in Üsküdar University. Here, 15 young people who are raised here, realized a project both in institutional terms and in individual professional terms. The second is, of course, science. Üsküdar University is a science center, and an indispensable part of it is the public sector. Üsküdar University's interest in this project in the public sector is an example of how the public service, which coincides with the statesmanship, can be accomplished with the district governorships. Fourth one is civil society. The non-governmental organization is also an association formed by our youth. For the purpose of this association, which was followed and managed by Ms. Nebiye, has realized this project on all four pillars. I would like to thank our president of university, our district governor, our professor Ayhan, who is the father of the project, and our dear students.”. 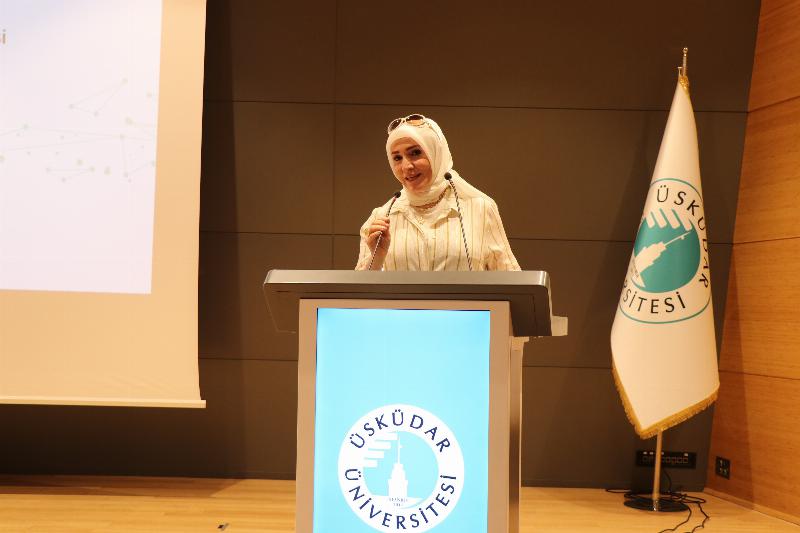 Dr. Nebiye Yasar: “We touched the wounds of society”

Mentioning the value that the project adds to the youth, Üsküdar University Young Brains Academy Application and Research Center Director Dr. Nebiye Yasar said “We were with the youth in the update of adding meaning and value to society. Young people really volunteered in the sincerest way. While the projects, in which young people are present, add value to the society, they also add value to the young people themselves. They learned to manage time, to communicate. They learned to find innovative initiatives to the problems of society. They also learned to work in a team spirit in communication with each other. When the Provincial Health Directorate came to visit young people in the past months, these young people are not like other young people. I said that within the project, young people mature and become different young people. They train themselves. As a corporate social project, we carried out both Istanbul Development Agency (ISTKA) projects and ministry projects. I would like to thank our president of university once again for giving us value in these projects.”. 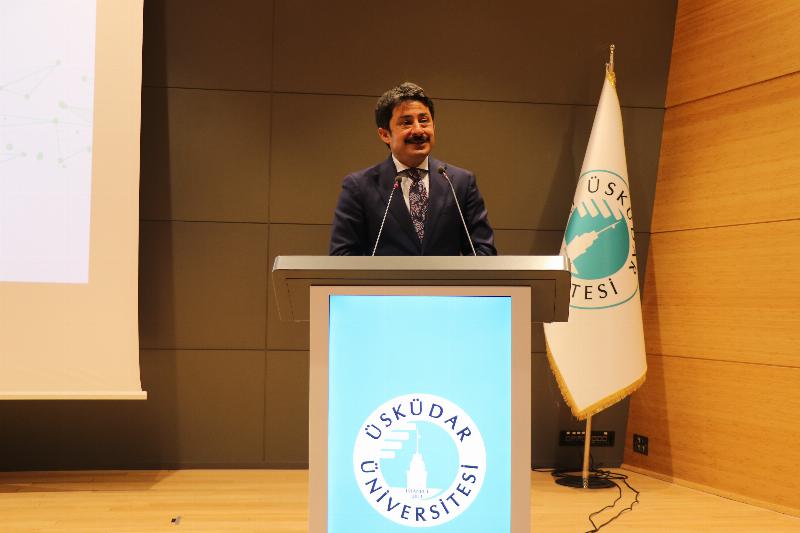 Üsküdar District Governor Murat Sefa Demiryürek; “I hope this project will turn into a ministry project”

Üsküdar District Governor Murat Sefa Demiryürek emphasized that social deprivation has been ignored for a long time and said “The other area that hurts more than material deprivation is social deprivation. It is an area that Türkiye needs to think about. The need for this situation is felt more and more every day. That's why I see that your field of education will come to the forefront in the coming decades and will emerge as a much more indispensable field. You may have noticed during the project process. We have a large number of seniors suffering from social deprivation. We have many brothers and disabled people. The absence of being called and being asked how they are is so important that it will be difficult to fill the void, therefore, we are ready to work with you wholeheartedly for this project. We did good work with Üsküdar University. First of all, we worked with our president of university and our professors. We hope to work with you from now on. I hope this project turns into a ministry project. That's why the work done is so valuable. I would like to express my special thanks to everyone.”. 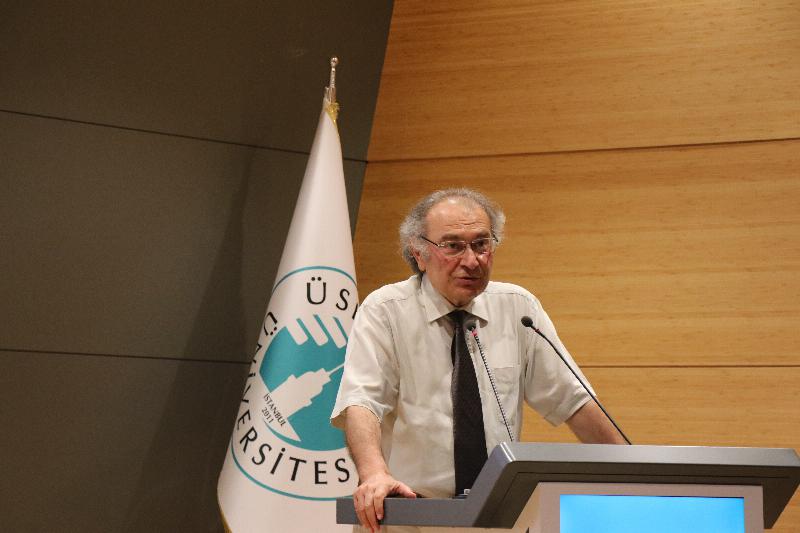 Prof. Nevzat Tarhan; “It is for the benefit of this country to receive the prayers of the elderly”

President of Üsküdar University, Psychiatrist Tarhan congratulated the young volunteers working within the scope of the project and said “Making people smile, and make them happy is the most beautiful thing. It is goodness, it is a moral gain. I especially congratulate the young people for their volunteering in this matter. I would especially like to thank our esteemed district governor for a public administrator's understanding of this. It's nice to have this sensitivity. A sensitivity that will make Türkiye regain what it has lost. There are many old people living alone now. A very good work was done for this. I thank you again. It is so nice to be together in such a beautiful work. Now, let our students take note of the examples they have experienced here. We turn them into a book and publish them at the university. Together with our district governorship, we will print it as a university. In fact, let's send this book to other places that see this project and did not care. It was like a pilot study, however, make sure that receiving the prayers of the elderly people is for the benefit of this country. The prophet had a word. If the elders did not have mercy, great calamities would fall upon you. It is truly a great spiritual trade to make such helpless old people happy and joyful.”.

Prof. Nevzat Tarhan: “Epidemic is a smaller version of the pandemic”

Mentioning that older individuals are more solution-oriented, Prof. Tarhan said: “Something like increasing the skill of emotional intelligence has emerged. For example, there is an argument in a house, there is tension; therefore, the children are unhappy… Grandmothers come to the house and say something to them and the argument in that house ends. How can a grandfather, grandmother, who does not know how television remote control works, solve the problem? This is pure wisdom… To give an example from animals regarding the development of emotional intelligence skills, for example, a deer… Young deer would take care of the senior deer in times of danger. Wherever the senior deer goes, the young deer goes in that direction. They have also experienced where fear and danger come from. Such a social capital is referred to as social capital in scientific terminology. Because new generations are growing up egocentric. Self-centeredness is the disease of this age.”.

Prof. Nevzat Tarhan: “It is very important to touch the souls of these people, to touch their lives”

Prof. Nevzat Tarhan said: "Egoism, narcissism... The disease of narcissism, the pandemic of narcissism… The book called 'The Epidemic of Narcissism' has been published. An epidemic is a smaller version of a pandemic. At this time, the most victims are older people because they are in an old age and live alone. During this year, a significant number of suicide cases occurred in Japan. There is even a case that was reflected in the press in Germany. A couple over 70 years old commit suicide by turning on the gas and leaving a letter behind. In the letter it is written that ‘for three and a half months, no one else knocked on our door but the doorman…’ That's why it is very important to invest for older people. It is valuable to touch the souls of these people, to touch their lives.”. 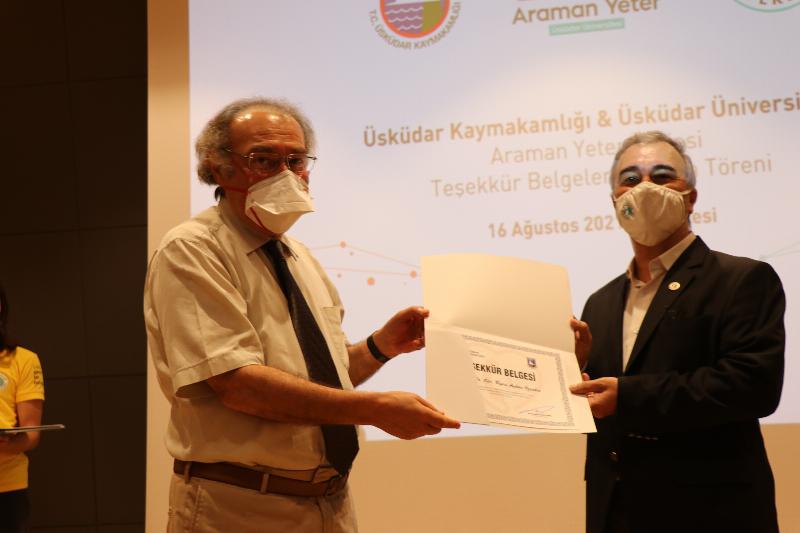 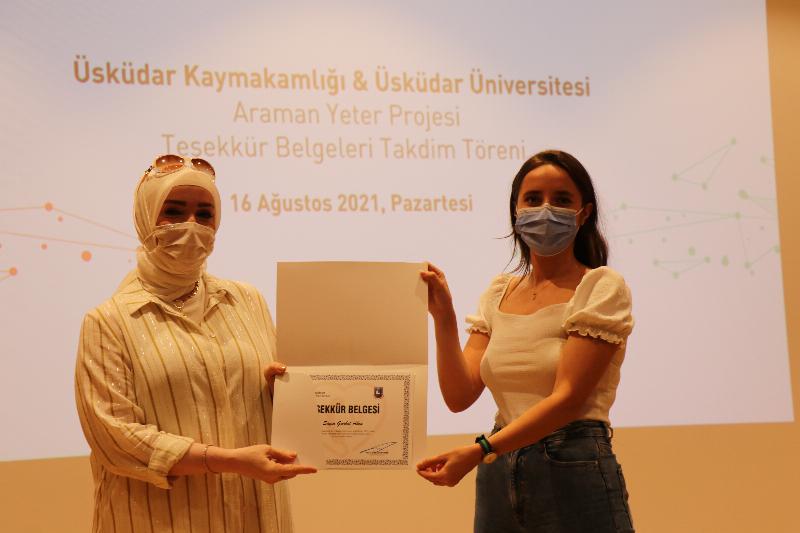 After the speeches, a certificate of appreciation was presented to the project coordinators and the students who took part in the project within the scope of the "Your Call is Enough" project implemented in cooperation with Üsküdar University and Üsküdar District Governorship.

The presentation ceremony ended with a photo shoot.