Prof. Nevzat Tarhan: “Epigenetic traits are the responsibility of the parents”

President of Üsküdar University, Psychiatrist Prof. Nevzat Tarhan participated as a guest in the Educator Training program organized by the World Children and Family Protection Platform. Tarhan, who gave a speech under the title of "Scale of Sexual Identity Disorder and the Importance of Age" said that “If you bring the child to us after the age of 14 -15, we have to say that you are too late. A person in the puberty age asks the questions “who am I, which direction should I go, why”. It is the period of the child to search for their own identity. The most important thing we will do in this period is to teach the child our age-appropriate sexual and social role at a young age.”. Pointing out the reparability of epigenetic mechanisms, Tarhan noted that the epigenetic trait is the responsibility of the parents. 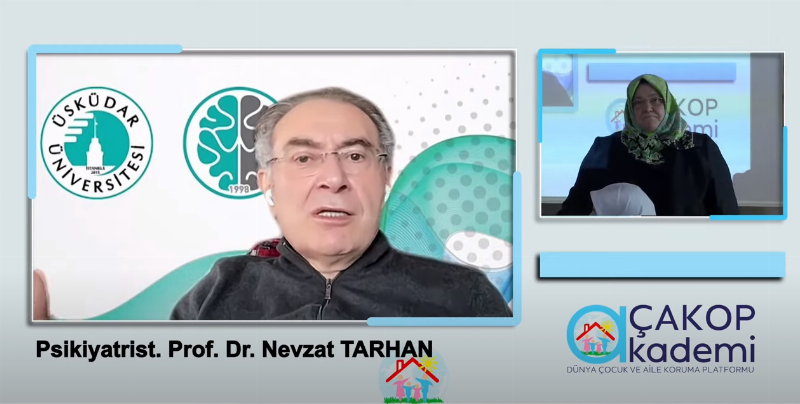 "Epigenetics is the quantum of genetics"

President of Üsküdar University, Psychiatrist Prof. Nevzat Tarhan expressed that people are also open to epigenetics because they are open to social change. Tarhan said, “Epigenetics is the quantum of genetics. How we treat a child at a young age or until early adolescence affects the things that child learns and their learnings can be genetically present in the developing psyche of the child. These are epigenetics. Actually, it is not innate. Later, there is a sequence change in the genes, which is polymorphism. This happens in addiction. In addiction treatment, epigenetic changes occur and brain plasticity is impaired. Addiction cannot be cured without hospitalization and intensive treatment without biological treatment. Epigenetic sequencing is important. In fact, if it continues to be taught, it can pass on one or two generations. If a person does not continue with the same social teaching, it disappears by itself, it is not hereditary for this reason. Maybe a generation or two generation can be passed on genetically. There is such a difference between epigenetics and genetics. This is something planned in creation, and since humans are open to social change, they are very open to epigenetics. There is no epigenetic excess in other living things.”.

“Natural guardian is the parents up to the age of 18”

Prof. Nevzat Tarhan also shared about sexual identity. Tarhan said, “What do we understand by the definition of sexual identity? Gender identity disorder is a condition in which a person intensely wants to be the opposite sex or believes in the fact that they are the opposite sex. If the patient is extremely uncomfortable with his or her biological sex, we call it sexual dysphoria. Until the age of 18, parents are natural guardians. Here, parents have the right to say, 'I do not approve of your sexual identity’.”.

“Epigenetic traits are entirely the responsibility of the parents”

Pointing out the reparability of epigenetic mechanisms, Tarhan mentioned that the epigenetic trait is the responsibility of the parents. Tarhan said, “There are fifty-sixty cases on the phenomenon of the wild child in the literature. The parents are both alcoholics and the child is growing up with complete physical and emotional neglect. There is a 10-year-old boy growing up among the dogs in the garden. When a child is found, it is observed that he imitates the behavior of the animals he grew up with. Epigenetically, this child has now acted according to the genetic expression of the animal he has learned in all of his eating, drinking, walking actions. It is not clear from his behavior that he is a boy or a girl, or even a human being. This child is 10 years old. At the age of 22, he is only learning to stand and speak a few words, he is taken from the family at the age of 22. After the child is found, he can learn. This shows us the reversibility of epigenetic mechanisms even though it is little bit. There are some mothers who are eager for a son because there are always daughters in the family. If the last child is born a girl, even if her name is a female name, they feed her like a boy, they give gun toys and so on. The child becomes like a man, behaves like a man. After reaching puberty; when they say, 'You are actually a girl,' the child does not accept it. She says, 'I'm more comfortable that way.' This woman is transgender. This is a complete education mistake. The epigenetic disposition is therefore entirely the responsibility of the parents.”.

“How can a society that eats even tomatoes organic, do that?”

Stating that the most important thing to do in this period is to teach the child our age-appropriate sexual and social roles, Tarhan said, “If you bring the child to us after the age of 14 -15, we have to say that you are too late. Age is very important in this case. At the age of puberty, the person asks the questions ‘who am I, which direction should I go, why’. It is the period of the child to search for their own identity. The most important thing we will do in this period is to teach the child our age-appropriate sexual and social role at a young age. When we cannot teach the child in kindergarten about this, they ask ‘Do you want to be a girl or a boy?’. They are given a hormone pill to decide about their identity, about their genes. It is common in America, Northern Europe. The little boy is given hormone pills. If it is a girl, male hormones are given. If it is a man, female hormones are given so that their organ can develop like that, how does a society that eats even a tomato organic do this? It is currently being discussed to reduce the age of sexual freedom to 12. There are theses so that children between the ages of 12 and 18 can experience sexuality randomly. We have to be very careful. There is a global cultural imperialism that has penetrated into our homes right now. This issue has been targeted, we need to know that.”.

“We applied the gender dysphoria scale”

Prof. Nevzat Tarhan informed on the gender dysphoria scale. Tarhan said, “In 2021, we conducted validation studies for the applicable adult form over the age of 18. We created the Turkish form with 25 items and one dimension, and we can use it in the clinic. Women are given the female version and men are given the male version. While applying the scale, biological gender is considered and the frequency of participation in the statements in the scale is 1 never, 5 always. After it is published academically, it is open to the public on the website of NP Istanbul under the name of the gender dysphoria scale, and anyone who wishes can evaluate themselves. It is then automatically finalized and sent to the e-mail address originally requested from the person. Here, the lowest score that can be obtained in the Turkish version of the gender dysphoria scale is 25, and the highest score is 125. Accordingly, as the score obtained from the total scale increases, gender dissatisfaction increases. In the studies carried out in 2007, the business consistency coefficient was calculated with 462 participants. We found 0.89 in the Turkish version. America sensitivity 97 output, a good high sensitivity. The first scale of the security study valid in Türkiye was applied to 368 university students, transgender individuals. It was determined that university students had a low level of gender dysphoria, and a moderate gender dysphoria in the non-social male group.”.

For the Gender Dysphoria Scale (in Turkish):