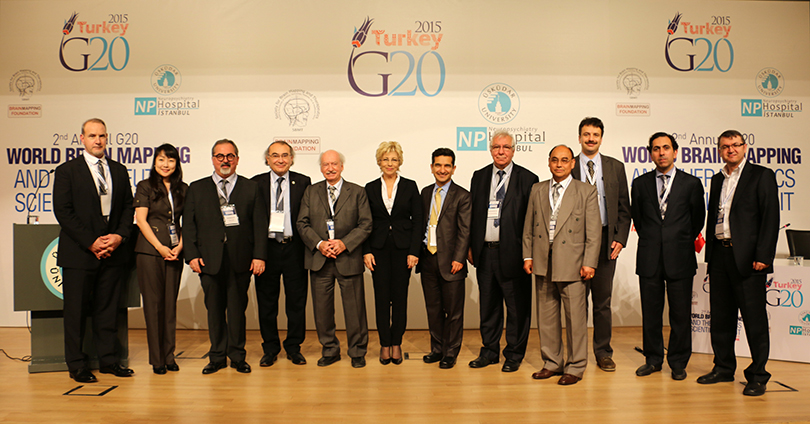 The result was shared with the World Leaders at G20 Summit.

Üsküdar University, representing Turkey in the Brain Initiative Project launched by the U.S. President Barack Obama in 2013 to investigate the unknown secrets of the brain and to develop treatment for major diseases such as Autism, Schizophrenia, Parkinson's disease, MS, Alzheimer’s disease and Depression, hosted an international symposium. At the 2nd  G20 World Brain Mapping and Therapeutics Summit, the latest developments about the activities of the brain were discussed, and the final declaration of the summit was announced on November 15th at the G20 Summit in Antalya. There are Titles featured in the report.

Üsküdar University conducting Turkey’s first brain park project and providing treatment and training on brain diseases hosted a very important symposium on this subject. Üsküdar University representing Turkey in the Brain Initiative Project, most remarkable project of the USA after Human Genome Project, brought scientists who are experts in their fields together in the 2nd G20 World Brain Mapping and Therapeutics Scientific Summit.

Opening speech of the summit organized in cooperation with the Society for Brain Mapping and Therapeutics (SBMT) in the Üsküdar University Altunizade Campus was held by Prof. Nevzat Tarhan, the Rector of the Üsküdar University and Member of the Board of Directors of the Association. Tarhan pointed out that the limits shall be pushed through interdisciplinary collaboration to unravel the secrets of the brain. 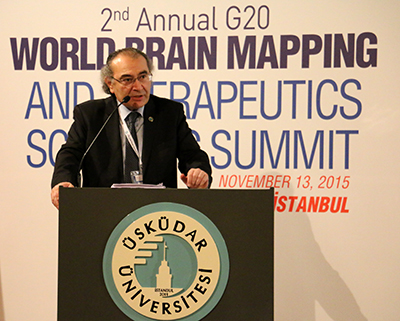 Prof. Tarhan: "There are revolutionary innovations"

“Today, we live a unique day in the history of Neuroscience. We are in a moment of technological innovations that enables us to understand the brain through revolutionary discoveries. Understanding the brain is solely an intriguing intellectual mission, however in long term, unrevealing secrets of the brain means the creation of new treatments for brain diseases. When we deepen our knowledge of how our brain works, we'll see ourselves differently, we will be able to treat diseases more accurately, we will be able to educate our children more effectively,  we will have insight in law and management.”

Prof. Tarhan stressed that the Brain Initiative primarily will work on “mapping brain circuits, measuring variable model of the electrical and chemical activity that occur between these circuits, development of new technologies to understand how the interaction of these circuits creates our cognitive and behavioral abilities”, and will create opportunities for international cooperation.

Prof. Tarhan said that  one third of the world's population suffer from various neuropsychiatric disorders such as Alzheimer's disease and depression according to the data of the World Health Organization (WHO), 13 percent of all diseases are brain-borne illnesses, and continued: "The numbers reveal the importance of the studies on this subject. We, Üsküdar University, want to be one of the leading universities of transformational neuroscience in Europe and Middle East in line with the scientific vision of the Brain Initiative, we want to lead the studies on this subject."

President of the Society for Brain Mapping and Therapeutics, Dr. Babak Kateb pointed out that health care costs impose a great burden on the world economy, and addressed the project's long-term goals. Likening the Brain Mapping Technique to the working principle of google map, Dr. Kateb said: "Brain-borne diseases have high costs for the countries. For example, the care cost of 5.5 million patients with Alzheimer’s disease in the USA is 200 billion dollars. In Europe, the economic burden of brain disorders is 798 billion dollars. With Brain Initiative Project, it is aimed to treat illnesses and to reduce health care costs in the long term". 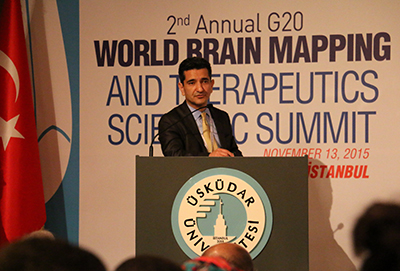 Accompanied by the music of Turkish culture, Turkish cuisine was presented

After the symposium, the guests attended to the program at NPISTANBUL Hospital. Before the program, guests toured the hospital and received information from the authorities about the services. Then, guests were served special delicacies of Turkish cuisine. The guests who ate dinner in the specially designed garden area of the hospital were presented performances from Turkish classical music. The guests enjoyed the night with the live performance of the Turkish Classical Music Research and Promotion Group (TÜMATA).

Then, the speakers met in Antalya where G20 Summit was held on November the 15th, the result of the preliminary report was announced by Prof. Nevzat Tarhan, Rector of Üsküdar University. Tarhan said following:

HOW WILL BRAIN INITIATIVE BE REFLECTED ON THE CLINIC?

“Reflections on the Clinic”, one of the milestones was discussed in accordance with the Brain Initiative 2025 Scientific Vision document.

"A study performed solely by a country or a research center is not sufficient to reveal the secret knowledge of the brain. To uncover this exciting secret, bridges need to be built between countries and fields of science. Both human and nonhuman models need to be investigated. This is compulsory to explore innovative ways.  Considering that a new medication can be found neither for schizophrenia nor for Alzheimer’s disease since 10 years, interdisciplinary and international cooperation has become a necessity today.

At the symposium held in Istanbul, presentations and discussions were mainly in the direction of the continuation of entropy studies by engineers and studies on the treatment of diseases such as schizophrenia, depression, Alzheimer's, Parkinson's, Autism, Epilepsy, post-traumatic stress disorder by replacement of brain implants by neurosurgeons. Additionally, it is discussed that biotechnology allows drug studies directly to the target tissue with new nanodrugs defined as “Nanoprobdrug”. Studies of NASA on this subject were discussed. Our approaches identified in İstanbul and Antalya meetings will be presented to the Directorship of the American National Health Organization as G20 summit report.

Here are the results of the summit:

1-In order to solve the secrets of the brain, Engineering, Health and Basic Sciences disciplines shall continue to work on brain imaging.

2-Normal neural circuits of the brain are to be mapped in order to understand the neural basis and brain correlates of our mental life in terms of Perceptions, Emotions, Motivation, Thinking system, Learning and Memory Functions and reflections on behavior. There are meaningful and promising developments in this regard. In addition to the drug therapy, “sonic”, magnetic and new electrical therapies are on the way.

6- Stem cell therapies give hope in diseases such as deafness, blindness, Alzheimer's disease and autism.

7- In the struggle with mutations that disrupt the genetic information in relationship of brain function and genetic risk factors, in Schizophrenia, autism, bipolar disorder and mental retardation, the importance of finding genetic code regions is remarkable.

8-Brain computer interfaces, known as BCI, were turned into microelectrode devices of the size of an aspirin and placed in the human brain. Through these devices, improvement in the use of legs and arms of paralyzed people and in the operation of the prosthesis is observed. In terms of seeing and hearing, the placement of implants in the inner ear and retina is encouraging.

9-The importance of “Brain Initiative” technologies is observable in the field of “Personalized Brain Medicine”. Magnetic and electrical treatments that provide “Functional Connectivity” and alternative ways in the brain draw attention.

10-We recommend the medical units in the style of "Head Clinic" that will form a council of main and related branches in terms of easy diagnosis and treatment to grow in number worldwide.

What is the Brain Initiative Project?

*The White House launched the Brain Initiative Project to reveal the secrets of the brain on November the 2nd, 2015. The project was started with a $ 100 million-Fund. By calling for scientist, President Obama wanted from scientist to create a dynamic picture of a brain functioning, and to understand better how we think, learn and remember.

* In line with the President's call, The Director of the National Labor Institute established a study group to explore models of neural activities that form the basis of the circuit mechanisms mediating mental and behavioral processes such as perception, memory, learning, planning, emotion and complex thinking.

*With the project, through using more simple systems to explore models of brain activity and to learn how the circuits work, a more comprehensive knowledge about how the brain generates complex thoughts and behaviors will be obtained. And it will be the fundamental guide for the diagnosis, treatment and improvement of neurological diseases and disorders that ruined so many lives.

*The success of this project launched with the announcement by President Obama at the White House depends on an innovative and multidisciplinary study at each level of nervous system functions (behavioral, electrophysiological, anatomical, cellular and molecular). In this regard, advances in theory, calculation and mathematical analysis will form the basis for interpretation and management of the new data that will be provided by the neuroscience laboratories.

*Brain Initiative will continue working in several phases. First 5-year period will mainly focus on technological developments. This process will be followed by a phase that emphasizes the integration of technology. The development of new technologies will require an ongoing cooperation of neuroscientists and colleagues from biology, physics, engineering, mathematics, statistics and behavioral sciences. Second 5-year period will seek answers to fundamental questions about the brain through the information provided from these developments. The underlying cause of important diseases such as Autism, Schizophrenia, Parkinson's, Alzheimer's, ALS will be tried to discover.

* Üsküdar University is the Turkish partner of this project . Within the scope of the project, will conduct studies on brain mapping of Turkey and the Middle East. 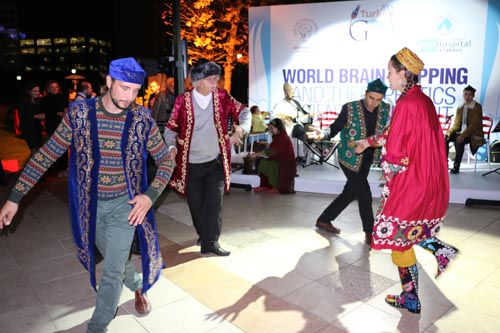 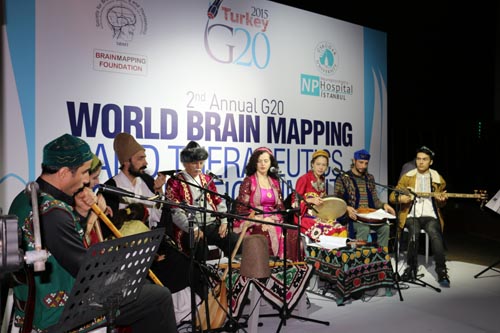 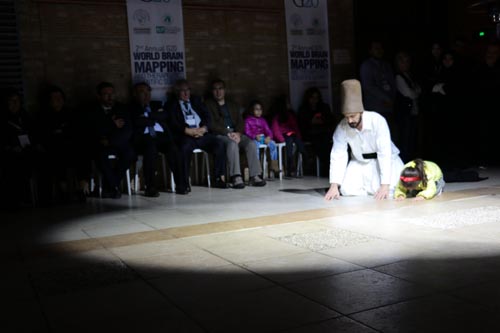 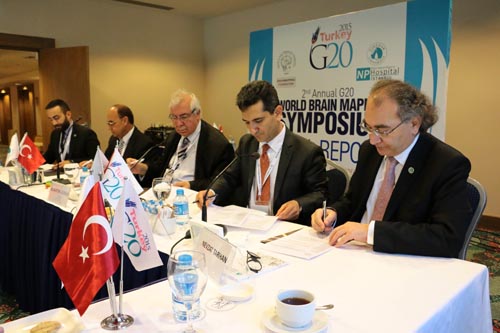 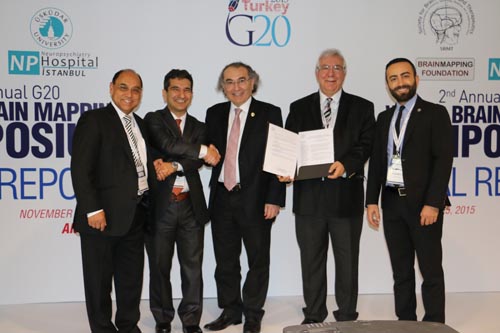 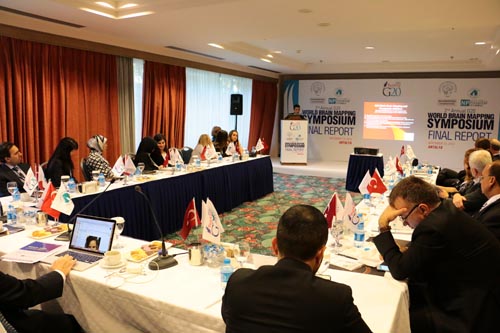 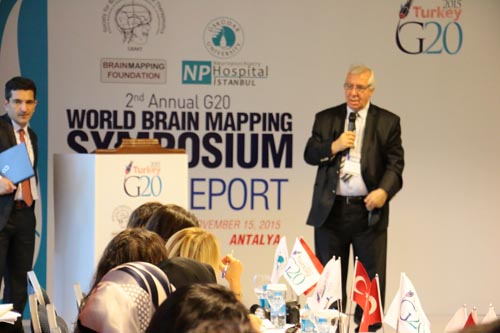 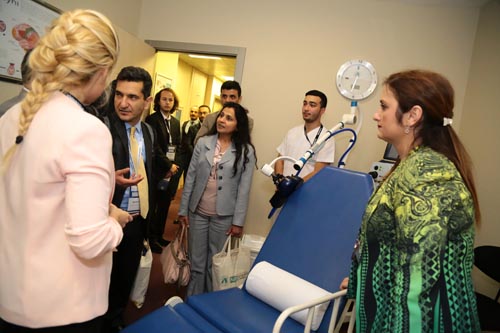 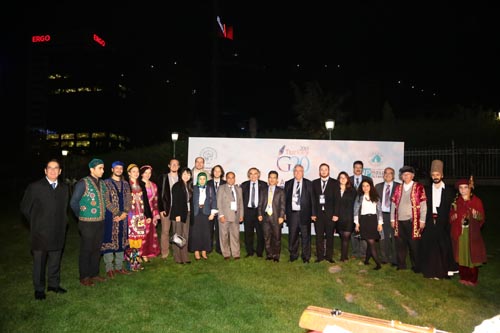